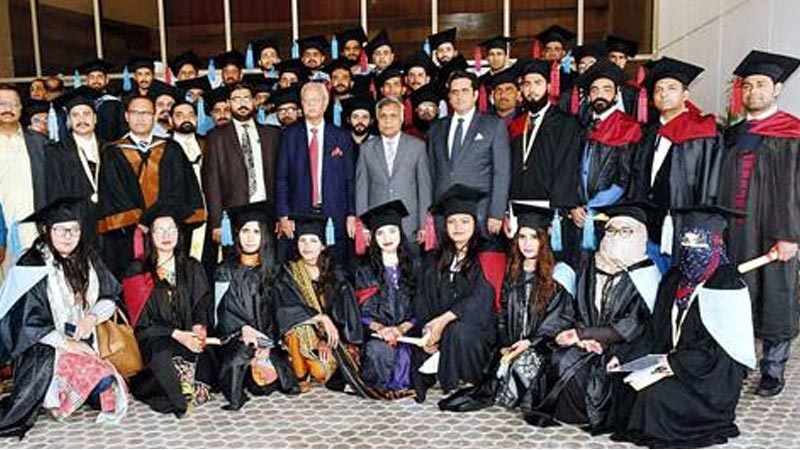 As many as 4442 graduates’ of Pir Mehr Ali Shah Arid Agriculture University Rawalpindi (PMAS-AAUR) awarded degrees on Thursday while 90 students were decorated with Medals at the 20th Convocation.

According to the PMAS-AAUR around 33 students received Ph.D degrees, 710 awarded with M.Phil/ MS degrees, 1469 Masters Degrees, while 2230 students got undergraduate degree in their respective disciplines.

Gold medals were awarded to 55 students on their outstanding performance in their academic record while 17 bagged silver and 18 secured bronze in the convocation.

While addressing as chief guest, Secretary General, Network of Academies of Sciences of Islamic Countries (NASIC) and former Vice Chancellor of PMAS-AAUR, Dr. Khalid Mahmood Khan said that agriculture sector is facing the daunting challenge of ensuring food security for ever growing population of Pakistan, which is projected to increase from the current 208 million to more than 400 million by 2050 under the business as usual scenario.

He stressed that agricultural scientists have the responsibility to come up with smart agriculture technologies and new climate-resilient farming systems especially for the rain-fed areas of Pakistan to enhance agricultural productivity, increase farm profitability and enhance national food security.

Earlier, VC PMAS-AAUR Qamar Zaman congratulated the graduates and said that University is making special efforts to expand its networking with both international and national universities, research organizations of repute through development and adoption of joint strategies to accelerate the pace of education, research, infrastructure and administrative development.

The VC said on the occasion that applied research has been strengthening to find out solutions to pressing farmers’ problems, develop innovative technologies and generate predictable outcomes. PMAS-AAUR has also launched digital agriculture initiative to promote automation in farming operations and postharvest handling processes. He hoped that these initiatives will be helpful to increase agricultural productivity and farmers’ profitability through ensuring efficient use of agricultural resources and minimizing postharvest losses, among others.