Women have potential to excel in every field of life: Dr Firdous 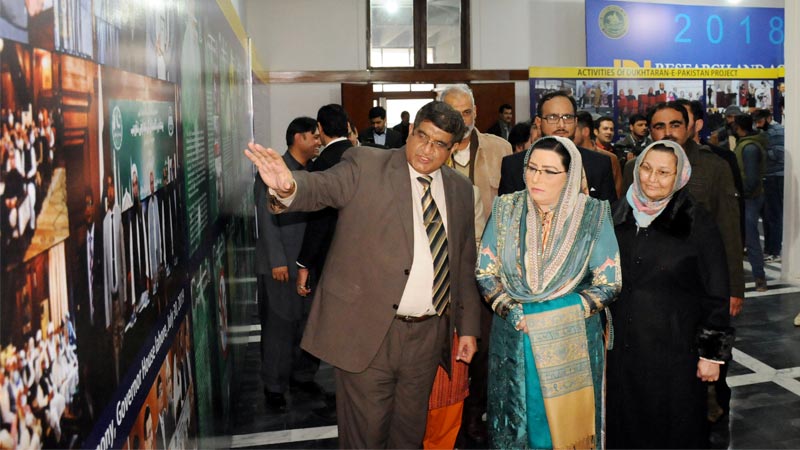 Special Assistant to Prime Minister on Information and Broadcasting Firdous Ashiq Awan has said Pakistan has said women are a great asset for the country and they have the potential and abilities to excel in every field of life.

She was addressing a consultative workshop on ‘Dukhtran e Pakistan’ organized by the Islamic Research Institute (IRI) of International Islamic University Islamabad (IIUI) in collaboration with Ministry of Women Development on Wednesday.

She said the woman have a greater role to play in the progress of the country. She said the country has been put on the path of stability after passing through a difficult phase. She regretted that the western world through their propaganda on the media has distorted the image of Islam. She said Islam and the Pakistani nation have nothing to do with terrorism and militancy.

The special assistant urged women to remain updated regarding the contemporary changes. She said women must adopt new trends but they must uphold Islamic and cultural traditions.

She criticized Indian atrocities in Held Kashmir and urged Pakistan women to be voice of the Kashmiri women. She hailed the IIUI for its service to the society. She said that the IIUI scholars have been playing pivotal role in dissemination of true image of Islam.

Speakers of the workshop asserted that empowerment of women is vital to rein in the forces of terrorism and meaningful role of women can lead the society to a prosperous and sustainable pathway .

Punjab Minister for Women Development Ashifa Riaz Fityana chaired the opening session wherein she called upon young women to come forward with a passion of disseminating Islam’s message of tolerance. She criticized propaganda against Islam and called to foil the bids taken through Islamophobia. The minister added that women often being the first teachers of children can play a vital role in educating young people to value peace and not destruction.

Rector IIUI Dr Masoom Yasinzai said that women have power to change the fate of the Muslim world. He said 16,000 female students of IIUI will work as envoys of Paigham-e-Pakistan and they will be taking Islam’s message of peace and harmony in every corner of world. He urged the youth to take guidance from the Holy Quran and apply its teachings in the practical life. He also hailed prime minister’s speech in the UNGA saying that he represented the sentiments of every Muslim.

Dr Farkhanda Zia, Vice President, Female Campus, IIUI, apprised the audience about aims and objectives of Dukhtran-e-Pakistan narrative. She hoped that deliberations of the workshop will work as shield to fight terrorism and build a peaceful society. She stressed upon women to play an active role in defeating violence and asked them to be contributors for building a harmonized and sustainable society.

Earlier, IRI DG Dr Zia ul Haq apprised the participants about the agenda of the workshop and also elaborated the role of IRI in Paigham-e-Pakistan initiative. He also discussed future plans of the narrative and vowed that IRI would continue service of society.