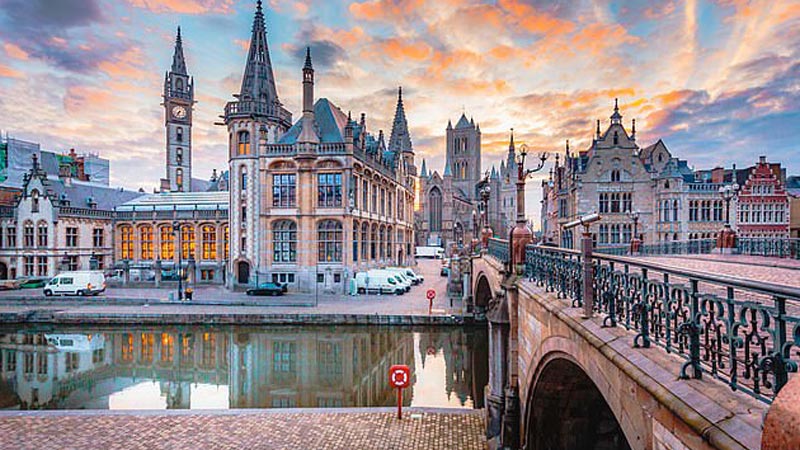 Word has it the charming Belgian city of Ghent will catch the world’s attention this year as it celebrates the genius of Jan van Eyck – particularly at the unveiling next week of a painstaking restoration of his greatest work.

Born around 1390 in nearby Maaseik, the Flemish artist revolutionised painting through his masterly use of oils, reflection and perspective to create minutely detailed, hyper-realistic works. These include the famous and enigmatic Arnolfini Portrait that now hangs in the National Gallery, London.

Eyck’s ultimate masterpiece was The Adoration Of The Mystic Lamb – also known as The Ghent Altarpiece because it was commissioned for St Bavo’s Cathedral in the city.

It is enormous – more than 14ft long with 12 oak panels weighing around two tons – but this hasn’t prevented it becoming one of the world’s most frequently stolen works of art.

Attacked by rioting Calvinists, seized by French revolutionaries, coveted by the King of Prussia, hidden in an Austrian salt mine by the Nazis – Belgium’s national treasure has been through the wars. The altarpiece only made it back to St Bavo’s in 1945, but it is still missing one panel that was stolen back in 1934.

Why is this work so prized? And can a single piece of art really be worth a special trip? Oh yes, and not just because of this action-packed back story.

The Adoration Of The Mystic Lamb is an engrossing masterpiece rich with tricks, symbols and technical brilliance – from upside-down writing to pearls exquisitely painted with just three brush strokes. Van Eyck’s brother, Hubert, also a painter, is said to have helped.

Since 2012, Belgian restorers have patiently brought its hundred-plus characters – singing angels, knights in armour, a lamb with near-human eyes – back to life after centuries of neglect, mishandling and overpainting. Next Friday, the five central panels will go on show in St Bavo’s.

The following weekend a companion exhibition opens at Ghent’s Museum of Fine Arts – the largest ever devoted to Van Eyck – which will offer a unique chance to get a close look at eight back-panels from The Adoration that were restored in 2016.

This three-month exhibition is expected to draw 250,000 visitors – but that’s not all.

Throughout the year, Ghent is going Van Eyck crazy, putting on concerts, plays, walking tours and even a marathon inspired by the artist. The most intriguing initiative is a restaurant menu using medieval ingredients, created by Michelin-starred chef Olly Ceulenaere.

The Adoration features 75 edible plants, herbs and fruit, so get ready to enjoy dishes flavoured with tansy, marigold and fennel.