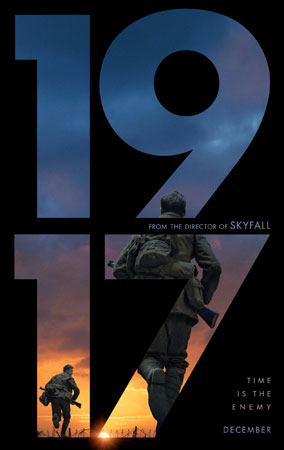 The ‘one continuous shot’ war thriller, inspired by the Director’s grandfather’s stories, is a major success at the box office, in addition to receiving all round critical acclaim.

Starting out at the No. 1 slot at the US box office in its wide opening weekend, the film has now grossed over US$ 200 million worldwide in theatrical sales and is still dominating cinemas.

1917 has also been on an incredible award-winning spree at every major event besides the 10 Oscar nominations, including ‘Best Picture’ and ‘Best Director,’ for the forthcoming 92nd Academy Awards, and 9 nominations for the BAFTA awards. The prestigious BAFTA and Oscar ceremonies are scheduled to be held on 2nd and 9th February 2020 in London and Los Angeles respectively.

‘1917’ has won 3 Awards at the Critics Choice Awards 2020 for ‘Best Director’, ‘Best Cinematographer’ and ‘Best Editing’. The film is also the 77th Golden Globes winner in the Best Picture-Drama category, and was honoured with the Best Director’s award for Sam Mendes.

creation and distribution of content across film, television, digital and gaming platforms.

Internationally, Reliance Entertainment has partnered since 2009 with iconic film producer and director, Steven Spielberg, in the formation of DreamWorks Studios, and thereafter, Amblin Partners. This relationship has produced several successful films such as The Help, War Horse, Lincoln, The Hundred Foot Journey, The Girl on the Train, A Dog’s Purpose, Bridge of Spies, The Post and the 2019 Golden Globe and Oscar winning film, Green Book.

1917 is a 2019 epic war film directed, co-written, and produced by Sam Mendes. The film stars George MacKay and Dean-Charles Chapman, with Mark Strong, Andrew Scott, Richard Madden, Claire Duburcq, Colin Firth, and Benedict Cumberbatch. It is based in part on an account told to Mendes by his paternal grandfather, Alfred Mendes and chronicles the story of two young British soldiers during World War I who are tasked with delivering a message calling off an attack doomed to fail, soon after the German retreat to the Hindenburg Line during Operation Alberich in 1917.

The project was officially announced in June 2018, with MacKay and Chapman signing on in October and the rest of the cast the following March. Filming took place from April to June 2019 in England and Scotland, with cinematographer Roger Deakins and editor Lee Smith using long takes to have the entire film appear as two consecutive continuous shots.

1917 premiered in the UK on 4 December 2019 and was theatrically released in the United States on 25 December, by Universal Pictures, and in the United Kingdom on 10 January 2020, by eOne. The film was praised by critics for Mendes’s direction, the performances, cinematography, musical score, sound effects, and realism. Among its various accolades, the film received 10 nominations at the 92nd Academy Awards, including Best Picture, Best Director, and Best Original Screenplay. The film won Best Motion Picture – Drama and Best Director at the 77th Golden Globe Awards, and it has received nine nominations at the 73rd British Academy Film Awards. It also won the Producers Guild of America Award for Best Theatrical Motion Picture.