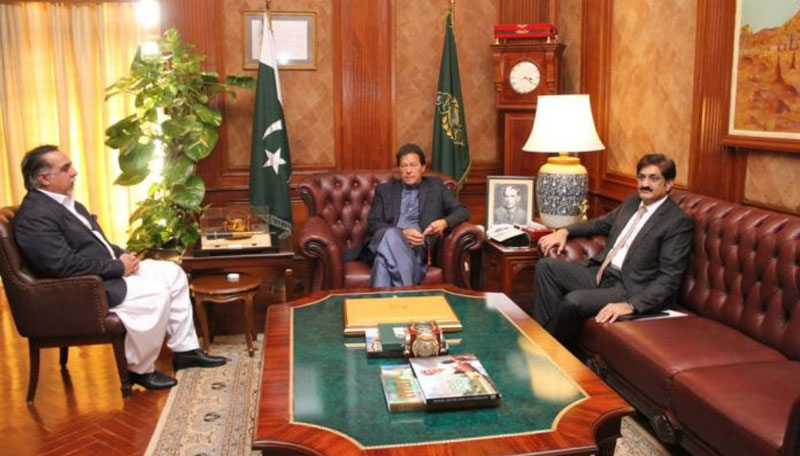 Prime Minister Imran Khan on Monday assured the chief minister of Sindh Syed Murad Ali Shah that all the important issues including development schemes, wheat shortage and locust swarm attacks would be resolved on priority basis.

During a meeting here at Governor’s House, the chief minister, while discussing development schemes, told the prime minister that some of the important projects of the province are pending in Planning & Development Ministry. He said locust swarm has wreaked havoc with the standing crops in the country, particularly in Sindh, adding that it is high time to destroy them in the desert area where they have settled for breeding.

Prime Minister Imran Khan said he will direct the plant protection department to take necessary measures and start aerial spray in the desert areas. The chief minister proposed to hire aircrafts from China and UAE so that action could be taken in time. The prime minister directed the federal government departments concerned to take emergent measures to start spray.

In the meeting, the issue of increasing polio cases was also discussed on which the prime minister expressed serious reservations. The prime minister said he would call a meeting of the National Polio Eradication Taskforce in which all the stakeholder would be invited to change and further strengthen the strategy to control it.

While the official statement was silent as to whether the issue of transfer of Sindh Inspector General of Police Kaleem Imam was discussed during the meeting, reports said Shah raised the matter and the prime minister and chief minister reached an agreement. During the meeting, the chief minister formally requested the prime minister to replace the incumbent provincial police chief Kaleem Imam and they reportedly agreed on the name of Mushtaq Mehar as new Sindh inspector general of police (IGP).

While discussing the emergence of deadly coronavirus in China, Chief Minister Shah pointed out that in Sindh, Chinese workers are engaged in Thar and Karachi and therefore a travel advisory for them and the people of Pakistan can be issued. The prime minister directed the National Institute of Health in Islamabad to develop its testing system and asked all the provinces to follow the World Health Organisation’s advice and take precautionary measures to deal with the virus.

Earlier, upon his arrival to Karachi, Prime Minister Imran was received by Chief Minister Shah and Governor Ismail at the Faisal Base.

During the meeting, the Grand Democratic Alliance (GDA) expressed its full confidence in the leadership of Prime Minister Imran Khan and assured its complete support and cooperation, the PM Office media wing in a press release said.

In the evening, Prime Minister Imran distributed cheques among youth during a ceremony for the government’s Kamyab Jawan Programme.