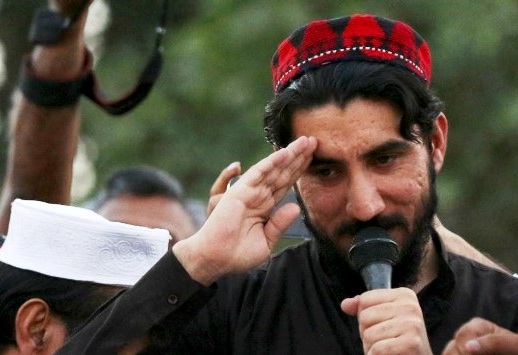 Hours after being arrested from Peshawar on Monday, Pashtun Tahaffuz Movement (PTM) chief Manzoor Pashteen was sent to Central Jail on a 14-day judicial remand by a magistrate.

Police said a case was registered against the PTM chief at the City Police Station in DI Khan on Jan 18 under sections 506 (punishment for criminal intimidation), 153-A (promoting enmity between different groups), 120-B (punishment of criminal conspiracy), 124 (sedition), and 123-A (condemning the creation of the country and advocating the abolishment of its sovereignty) of the Pakistan Penal Code.

According to the FIR, Pashteen and other PTM leaders had attended a gathering on Jan 18 in DI Khan where the PTM chief had allegedly said that the 1973 constitution violates basic human rights. The FIR added that Pashteen had also made derogatory remarks about the State of Pakistan.

Pashteen was produced before a magistrate in Judicial Complex, Peshawar, where strict security arrangements were made prior to his arrival. The court will hold a hearing today to decide whether a transitory remand can be granted in order to move him to Dera Ismail Khan, where the FIR has been registered against him.

“This is our punishment for demanding our rights in a peaceful and democratic manner. Manzoor’s arrest will only strengthen our resolve. We demand the immediate release of Manzoor Pashteen,” PTM leader and MNA Mohsin Dawar said. The PPP, in a statement, demanded that Pashteen be released immediately and that a dialogue be initiated between the government and the youth of tribal areas. The statement said that PTM’s demands are ‘legitimate’ and ‘will not be swept aside by arresting Manzoor Pashteen’. “Political arrests only aggravate the situation and do not help resolve political issues. It is most foolish and highly condemnable that the voice of tribal youth is being silenced through brute state force at a time when there is urgent need for a dialogue,” a statement issued by PPP’s Khyber Pakhtunkhwa General Secretary Faisal Kundi said.