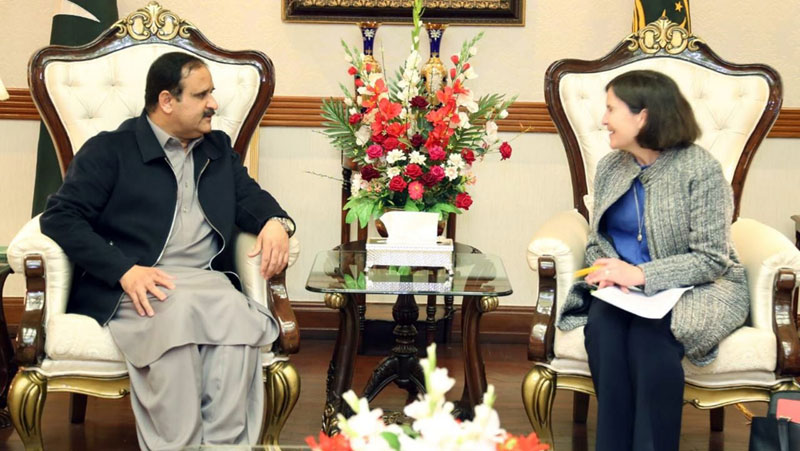 Foreign Minister Shah Mahmood Qureshi thanked him for approving this package and added that Usman Buzdar had won the hearts of the people. Amir Dogar MNA said that it is their luck that a person like Usman Buzdar is the chief minister of the province. Assembly members from Multan called on chief minister Usman Buzdar at his office on Monday. While talking to MNAs and PMAs from Multan, Chief Minister Usman Buzdar said that Multan is his second home and he has a deep-rooted attachment with this city. I am the custodian of rights of every backward area, including Multan, and implementation on this package will be personally monitored by me, he said.

Problems like sewerage and clean drinking water in Multan will also be resolved and water filtration plants will be installed in the constituencies of assembly members. He told that a project of establishing mother and child hospital will also be presented before the cabinet for approval. Along with it, the P&D department will identify development priorities after reviewing the development package. He said that assembly members will be consulted for the identification of development projects of the next annual development programme of the financial year 2020-21. Relevant secretaries will also attend these meetings, he added.

The chief minister said that funds allocated for Multan during the current financial year will be provided on a priority basis and an announcement will be made after reviewing big city allowance for Multan and all other divisional headquarters. The government will also start new projects for improving health and educational facilities in Multan, he said. The chief minister said that steps will be taken for repair and maintenance of roads to meet the requirements of Multan city and the federal government will also be approached for the establishment of a special economic zone in Multan. The government will also take immediate steps to complete northern and southern bypasses, he added.

He said that dualisation of Multan-Vehari Road project will be started through public-private partnership and necessary steps will also be taken to solve traffic problems of Multan city. He said that development projects are being formulated in consultation with assembly members in Punjab for the first time adding that fundamental problems of the people will be solved by the completion of development projects under Punjab Municipal Service Programme. Usman Buzdar said that funds allocated for southern Punjab cannot be reallocated after geo-fencing and added that he will strive to give rights to the cities that have remained neglected for years.

Separately, a high-level meeting was held under the chair of Chief Minister Punjab Sardar Usman Buzdar which reviewed the development projects relating to wildlife and fisheries department. Formal approval was given for setting up of fish markets throughout the province. The chief minister said that the Punjab government will provide 80 percent subsidy for promoting fish farming. While approving to set up saline water aquaculture research centre in Muzaffargarh, he said that five thousand cages will be placed for fisheries at different barrages including Chashma, Taunsa barrages and Head Panjnad.

It was also decided in principle to launch the cage fish culture cluster development programme for the promotion of fisheries. He said that capacity building training will be provided to 750 fish farmers. Soon, the hatchery project will be inaugurated in Fazilpur, he added. He said that three fish nursery units are being built-in Darama, Gujja and Jampur. Tilapia fish farm is being set up in Muzaffargarh as well, he added. Farms would be set up at 2.5 thousand acres under shrimp farming cluster development project. A programme of producing three thousand metric ton prawns annually is being started in Punjab which will provide job opportunities to more than two thousand people. He directed to complete projects as soon as possible for promoting fisheries. Provincial Minister for Forest, Wildlife and Fisheries Asad Khokhar, Secretary Finance, Secretary Forests, Wildlife & Fisheries, DG Fisheries and others attended the meeting.

Also, the new DFID head in Pakistan, Ms Annable Gerry, called on Chief Minister Sardar Usman Buzdar at his office on Monday. The chief minister congratulated her and expressed good wishes. He said the welfare of the people is a collective objective and health and education are among the top priorities of the PTI government. New educational institutions are being established in Punjab. The government welcomes the cooperation of DFID in the journey of public service, he said. He told that the Punjab government has launched several projects to empower the youth. Four technical universities are being set up in the province.

He said that soft loans will be disbursed to the youth for business and institute will be set up for the treatment of blood diseases in Lahore along with the project of a new cardiac hospital. Special attention is paid to the development of backward areas, he said. Several initiatives have been taken for the welfare of women and the government is also investing in human development. He said the programme of providing relief to the people will be moved ahead by keeping close liaison with DFID. He said that the cooperation of DFID in the mission of public service is significant. Ms Annabel Gerry said that DFID will continue supporting Punjab government for the betterment in education, health, skilled-development and other sectors. DFID representative in Punjab Janal Shah, Governance Group Head of DFID Pakistan Ms Sarah Cooper, Provincial Minister Finance Hashim Jawan Bakhat, Chairman P&D, Secretary Finance, Secretary P&D and others were also present on this occasion.

Meanwhile, Usman Buzdar expressed a deep sense of sorrow and grief over the sad demise of renowned scholar, historian, journalist, writer and educationist Sharif-ul-Mujahid. In his condolence message, the chief minister extended heartfelt sympathies and condoled with the bereaved family and prayed that may Allah Almighty rest the departed soul in eternal peace and grant courage and strength to the bereaved family members to bear this loss with equanimity. He said that people like Sharif-ul-Mujahid are recognition and pride of society. Sharif-ul-Mujahid benefited thousands of students and his services in education and research fields will long be remembered.