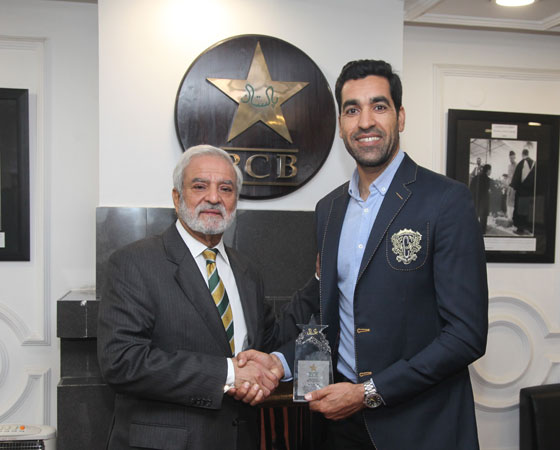 LAHORE: Pakistan fast bowler Umar Gul was honoured on Monday for his Pakistan record figures of five for six in T20Is when Pakistan Cricket Board (PCB) Chairman Ehsan Mani presented him with a crystal plaque. The ceremony took place in the PCB Chairman’s office after the third Twenty20 International between Pakistan and Bangladesh was abandoned without a ball being bowled. Umar’s recorded figures of 3-0-6-5 against New Zealand at The Oval in Pakistan’s successful ICC Men’s T20 World Cup 2009 journey in England. Umar was the tournament’s leading wicket-taker with 13 wickets as Pakistan defeated Sri Lanka in the final at Lord’s by eight wickets. Umar’s 5-6 remained a world record until Sri Lanka’s Ajantha Mendis took 4-1-16-6 against Australia in Pallekele in August 2011. India’s Deepak Chahar presently holds the record for besting bowling performance following his figures of 3.2-0-7-6 against Bangladesh in Nagpur in November 2019. Umar followed up his five for six with 2.2-0-6-5 four years later against South Africa at Centurion.

After receiving the crystal plaque from PCB Chairman Mani, Umar said: “My each and every appearance and performance has been for Pakistan and it has been a privilege to represent my country and team, and play a small part in its successes. I am grateful to the PCB for remembering and acknowledging my achievement. This is a welcome change in the way the PCB is operating and respecting cricketers who have contributed in the country’s image and profile building. I sincerely hope this trend continues and all the cricketers get their due recognition in front of their fans. Such gestures will not only act as an encouragement for the players, but also play a big role in motivating youngsters to take up cricket as a profession.” The PCB had honoured Javed Miandad during the Rawalpindi Test against Sri Lanka, while Saleem Yousuf and Rashid Khan were honoured during the Karachi Test.