* One of the best options is being dropped near Dunkery Beacon, the highest point of the National Park 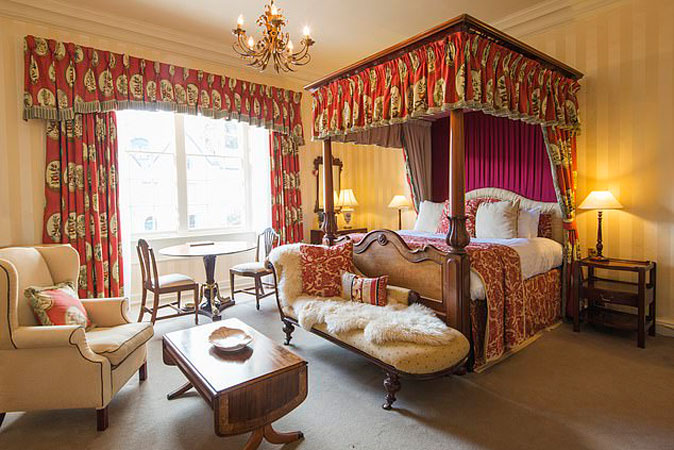 Fancy a walk? The cheerful staff at the Luttrell Arms, a grand old coaching inn in Somerset, will gladly help. They drive guests up to Exmoor and leave them there to walk back. One of the best options is being dropped near Dunkery Beacon, the highest point of the National Park. The peak is 1,700ft high, dominating the landscape that slopes down from the moor in a series of misty wooded valleys to Porlock Bay in the distance.

After the seven-mile hike back to the hotel, recover by an open fire in the bar and take comfort from the fact that at least the walk is downhill all the way.

The Luttrell is a cosy retreat, whether you’ve just finished a hike or want to relax by a log fire in this romantic bolthole in a pretty seaside village. The ivy-covered, red-sandstone landmark has stood at the heart of Dunster, under the watchful eye of its fairytale hilltop castle, since medieval times.

After the seven-mile hike back to the hotel, recover by an open fire in the bar and take comfort from the fact that at least the walk is downhill all the way

If a walk on Exmoor is a little too strenuous, you could stroll the cobbled streets of Dunster, one of the West Country’s most photogenic spots. Dunster has an octagonal market hall and a street full of tearooms and galleries.

You don’t even need a lift from the hotel to walk to Minehead’s sandy beach, Dunster’s deer park or the chance to spot England’s tallest tree (a 200ft Douglas fir) at a delightfully named wood called Nutcombe Bottom. 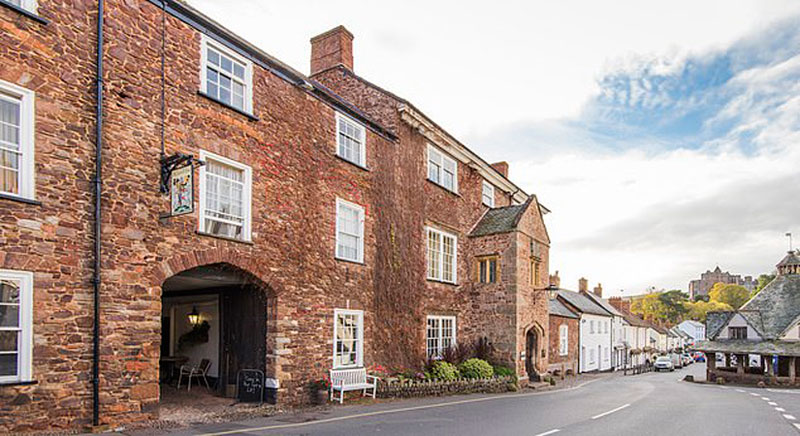 And a mile away is a station on the West Somerset line, Britain’s longest steam railway. Now with occasional links to the national network at Taunton, it increasingly offers a car-free option for travellers. But that would mean you miss heading to Dunster on the A39. ‘The Atlantic Highway’ is one of Britain’s great driving roads. The stretch near Dunster – between Coleridge’s cottage at Nether Stowey and the ‘Little Switzerland’ scenery of Lynmouth – is so distractingly spectacular that it’s almost a safety hazard.

THE USP — a hotel built in the 15th Century under the ramparts of a Norman castle in a medieval village in Exmoor National Park.

THE ROOMS — twenty-nine bedrooms vary from quirky four-poster rooms to neat, newly converted stables. Choose rooms 12, 14 or 17 for the best medieval features. Whatever your room, dogs can have their own bed. Owners can also choose dedicated ‘dog’ rooms with private garden access, and breakfast can be served in a separate dog-friendly room.

THE FOOD — it’s hard to choose from the fresh and comforting fare on offer. I had soft, delicate sheep’s milk mousse with balsamic chocolate as a starter, then crusty roast pork loin with spicy sauce and broccoli and carrots, but had also been tempted by the roast halibut with parsnip puree and venison with pickled blackberries. Choose the AA two-rosette formal restaurant or a more casual menu to eat in the inner courtyard or garden.