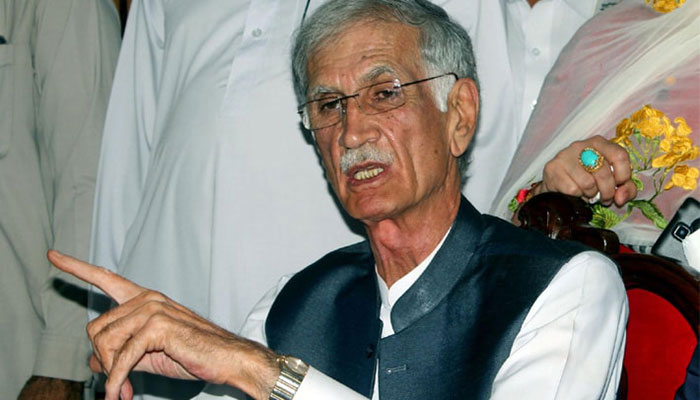 NOWSHERA: Defence Minister Pervez Khattak said that members that were plotting against the provincial government were removed and claimed that issue of the Balochistan government will also be resolved by tomorrow.

Addressing a ceremony in Nowshera, he said conspiracies against Khyber Pakhtunkhwa government have been foiled and affairs in Punjab and Balochistan would also be settled soon.

Pervez Khattak said on the directives of Prime Minister Imran Khan, leaders of Pashtun Tahafuz Movement and members of parliament have been invited to hold talks on the concerned issues that would bring PTM into the mainstream.

Defense Minister said that the conspiracies against KP government have been foiled and affairs in Punjab and Baluchistan would be settled soon.

He said that doors are open to resolve issues with consent and dialogues. He said that on the directives of Prime Minister Imran Khan, Leaders of the Pashtun Tahafuz Movement (PTM) and members of parliament have been invited to hold talks adding it would bring PTM into the mainstream.

He said talks with coalition partners had been successful and soon the agreement would be acted upon.

The charge-sheet has also highlighted the disappointing performance of Shahram Khan Tarakai as KP Minister for Local Government as he has failed to bring new LG laws.

Sources said the lack of progress of the two ministers became a reason for the government to face serious criticism and embarrassment despite issuance of warnings many times by the KP Chief Minister Mahmood Khan.

Pervez Khattak also announced that he had approached the MNAs of the Pashtun Tahafuz Movement and invited them for talks with the government. He said the government wanted peace and prosperity of the tribal areas and hoped the PTM would accept his invitation for talks.