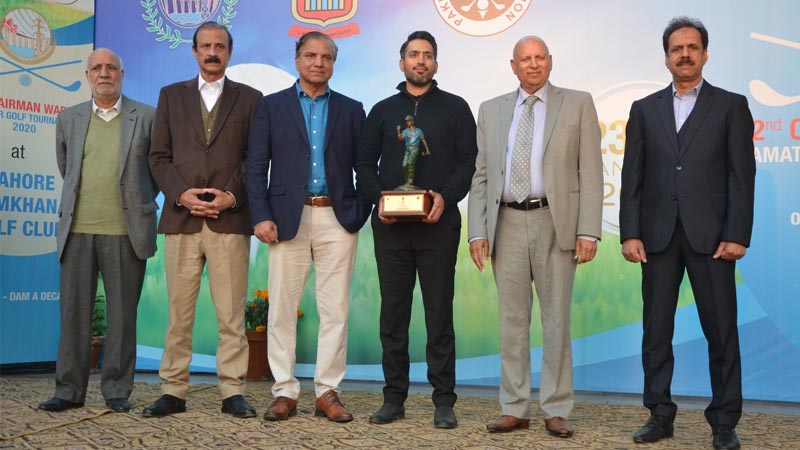 LAHORE: The 2nd Chairman WAPDA Golf Chamspionship came to a thrilling and exhilarating conclusion at the Lahore Gymkhana Golf Course after three rounds of appealing and engrossing competition here Sunday. And the golfer of merit turned out to be Qasim Ali Khan of Lahore Gymkhana who triumphed with honours and became the title winner in this WAPDA endorsed prestigious golf championship. Interestingly, Qasim had been leader on all three days and his command and control and nerve free application of golfing skills enabled him to look far superior to all his adversaries, three of whom were national level players and loaded with competitive abilities.

But in this championship with three rounds scores of 71, 73 and 77 and a gross aggregate score of 221, Qasim casted his spell on the national golf scene of Pakistan and was patted and complimented by Chairman WAPDA Lt Gen (r) Muzzamil Hussain and Lt Gen Hilal Hussain, President of the Pakistan Golf Federation, for a wonderful performance. As for the other performers in the gross section, Ghazanfar Mehmood of WAPDA won the runner-up position with a three rounds aggregate score of 227. Another national level player Ashiq Hussain of Multan came third. His score was 231. In the competitive race in the net category, Mohsen Zafar won the first net with a score of 217. Second net was won by Omar Farooq. He and Mohsen had the same score but Mohsen won because he had a better score in the last 18 holes. Jamal Nasir came third. In the invitational match, Javed A Khan won first gross while second gross went to Lt Gen (r) Hilal Hussain and third to Dr Tariq Malik. Net section winner was Imtiaz Shah.