General: US committed to Syria fight; Missions up against IS 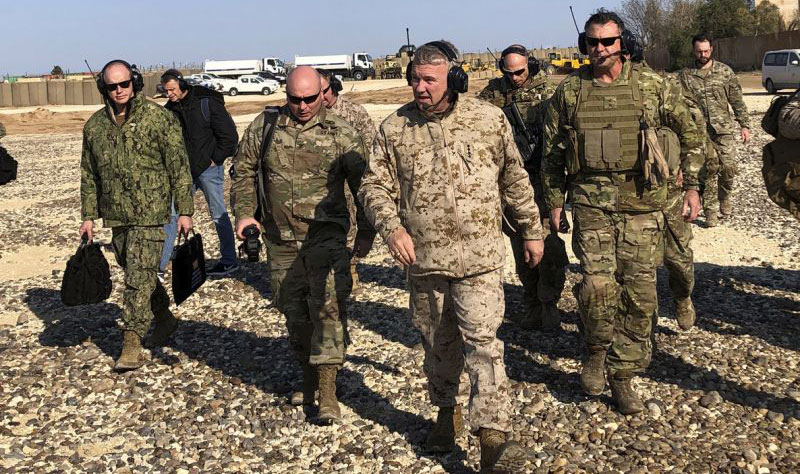 US troops at military outposts ín eastern Syria asked variations of the same question to their top commander Saturday: What is our future here? What are the goals we need to think about?

Gen. Frank McKenzie, the U.S Middle East commander, knows the future is not certain. But at least for today, he said, “this is an area where we made a commitment. I think we’re going to be here for a while.”

In an unannounced tour of five military bases in Syria stretching from the northeastern part of the country to the Middle Euphrates River Valley, McKenzie offered reassurances that the US remains committed to its mission in Syria. And he said that operations against Islamic State militants are on the rise again, after the US cut back due to the increased tensions with Iran and the need to concentrate on increasing security.

But these are uncertain times. And America’s mission to train and partner with Syrian Democratic Forces in the fight against the Islamic State group has been tested.

Just last year President Donald Trump ordered US troops to withdraw from Syria – part of his vow to bring forces home and halt the endless wars. Over time, his military commanders, members of Congress and other leaders convinced Trump to keep a scaled-back force in Syria to protect an expanse of Kurdish-controlled oil fields and facilities from falling into IS hands.

So while some troops did leave Syria, the Pentagon ordered others to move into the east, with armored vehicles and security forces to help the SDF guard the oil.

McKenzie, who met with the SDF’s commander, Mazloum Abdi, at an undisclosed military base in eastern Syria Saturday morning, said the Kurdish leader wanted assurances that the US would continue to help his fighters.

His answer, McKenzie said, was that the U.S will continue to conduct anti-IS missions, partner with the rebel forces and help protect the oil fields. But, he said, he did not put a deadline on it.

“He knows, and I agree, that we’re not going to be here for 100 years,” McKenzie said during a stop at Green Village military outpost, east of Deir el-Zour. “I frankly don’t know how long we’re going to be here and I have no instructions other than to continue to work with our partner here.”

McKenzie criss-crossed the east, flying by helicopter over long stretches of desert flecked with intermittent patches of green and scattered villages. It was his first trip to the five bases.

The US declared an end to the Islamic State’s physical caliphate last March. But in recent months there have been growing concerns that the insurgents are regrouping, particularly in the west where US forces are not present.

Operations against IS, however, were interrupted in recent weeks, in the aftermath of the US drone strike that killed a top Iranian general in Iraq. Fearing reprisals by Iran and Iranian-backed proxy forces, the US paused or slowed operations to beef up security in Iraq and Syria. Iran, after several days, launched ballistic missiles at two military bases in Iraq where US troops are stationed. Several dozen were diagnosed with traumatic brain injury, but no one was killed in the attacks.

According to officials, US operations against the Islamic State group in Syria were reduced by half over that time. But as McKenzie took stock of the situation during his day-long sprint across eastern Syria he said that has now changed.

“Certainly, the pace of operations went down earlier in the year, based on events in Iraq” McKenzie told two reporters from The Associated Press and The Washington Post traveling with him into Syria. “We’re now back up to, I think, probably three or four operations a week with our partners here — so that pace is beginning to pick up and we are very pleased with that.”

Maj. Gen. Eric Hill, commander of the special operations forces in Iraq and Syria, was with McKenzie for most of the day. He said his forces continue to train and conduct operations with the SDF to root out IS insurgents who are “hiding in the valleys, in the caves, in the desserts, trying to regroup.”

Hill spoke to reporters at the military base located at the Conoco gas field near Deir el-Zour, where military trucks and aircraft sit alongside looming plant buildings and old homes that have been turned into high-tech operations centers and barracks.

According to officials, there are now about 750 US troops in eastern Syria, spread across a swath of land that stretches more than 90 miles (150 kilometers) from Deir el-Zour to the border region east of al-Hassakeh.

The US-Syrian Kurdish relationship, which dates back to 2014, was strained after Trump last month ordered American troops out of northern Syria, making way for a Turkish invasion of Kurdish-held towns and villages along a stretch of the border.

Kurdish and American forces are now operating in a region that is more complicated and crowded with troops since the Turks began their attack on northeast Syria in early October, aimed at pushing the Kurdish fighters away from the border.

While talking to troops on Saturday, McKenzie warned that Iranian proxy forces in Syria continue to be a significant risk to them. He said that while Iran appears to be deterred right now from launching another attack against the U.S, “you always worry about their ability to command and control their proxy elements which they have equipped very well.”