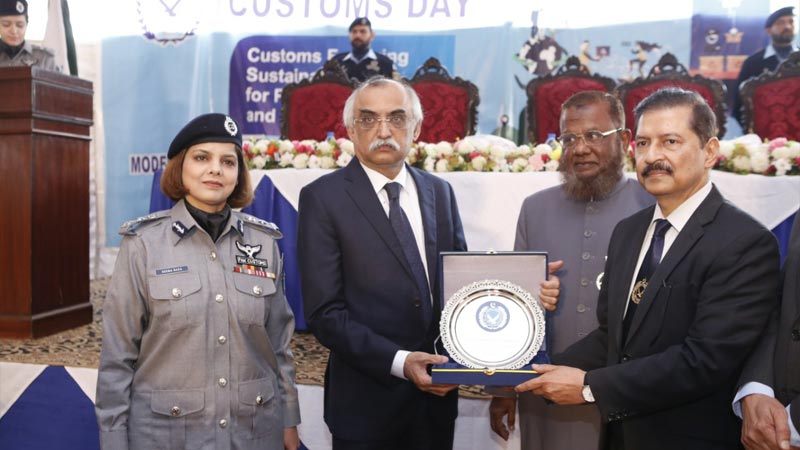 A big event was held to celebrate International Customs Day in Customs House, Islamabad which was chaired and addressed by FBR Chairman Syed Shabbar Zaidi.

Muhammad Javed Ghani, Member (Customs Policy), FBR, also addressed the Customs officers and officials. International Customs Day is celebrated by 183 Customs Administrations of the World on 26th January of every year under the auspices of the World Customs Organization (WCO) that has chosen the theme “Customs fostering sustainability for People, Prosperity, and the Planet” for this year (i.e. 2020). The purpose being to urge upon the customs administrations world over to attach requisite priority to this theme and make practical arrangements to ensure tangible achievements in this regard.

While speaking on the occasion, the Chairman FBR said that Pakistan Customs has achieved milestones in ensuring social, economic, and environmental development and safety for the people of Pakistan. He praised Customs for working very professionally and innovatively and engaging the Customs administrations of the leading trade partners of Pakistan for social, economic, and environmental development and protection of Pakistan. He stated that, in addition to existing automated (WeBOC) system, Customs has initiated a project namely WeBOC-GLO and Pakistan Single Window for updating and modernizing the system keeping in lines with international best practices prevalent around the world for facilitating and securing trade. He stated that, in addition to these initiatives, Customs has implemented Advance Passenger Information System (APIS), Global Travelers Assessment System (GTAS). At the end of his speech, while felicitating the officers and officials of Pakistan Customs on this important occasion, he expected them to continue to strive for greater professionalism in line with international best practices and transform the organization into a business friendly, forward looking and a partner in the economic development of Pakistan. He emphasized that customs’ efficiency can be improved best with alignment of its operations with internationally recognized/recommended practices. He also underscored that customs’ role now is more of facilitation and regulatory.

Member (Customs Policy), in his address to the officers and officials of Pakistan Customs, highlighted the milestones, especially during the last one year, in fostering sustainability for people (who represents society), for prosperity (which represents economic gains), and for the planet (which represent environment in Pakistan and the world). He referred to the enforcement tools like National Customs Enforcement Network (nCEN) which Pakistan Customs has installed. With nCEN, Pakistan Customs is included in the club of 35 customs administrations in the world who are using nCEN and now Pakistan is the seventh country in the Asia-Pacific region where nCEN is operational. He further stated that, by streamlining its operations, Pakistan Customs has achieved a milestone in increasing its ranking by thirty one (31) positions in the ‘Trading across border’ Index. This has also significantly contributed to Pakistan’s improvement in East of Doing Business Index by twenty eight (28) positions. According to him, Pakistan Customs developed model Customs Mutual Assistance Agreements and MoUs, which included all the required provisions to have cooperation from other/important customs administrations in this arena. To this effect, Pakistan Customs finalized the draft agreements and MoUs in consultation with all the ministries and departments in Pakistan and have sent the same for finalization (and signing) to USA, European Union (EU), Russia, Hong Kong, Singapore, Iran, Saudi Arabia, Tajikistan and Afghanistan. Moreover, significant headway has been made regarding Green Corridor and other Customs initiatives with China. At the end of his speech, he congratulated the officers and officials of Pakistan Customs and the International community on the occasion of International Customs Day and hoped to work in close coordination with them to achieve the common objective of sustainable future where social, economic, and environmental needs are at the heart of viable actions.