In Peru, ‘they teach you to be ashamed,’ indigenous trans candidate says 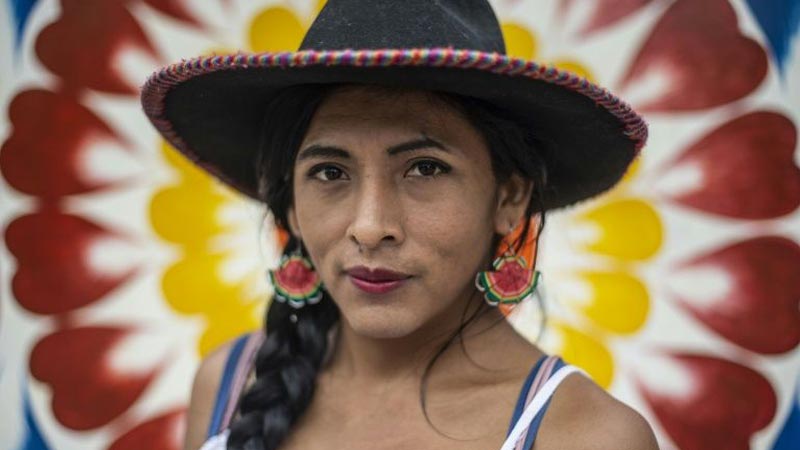 The first indigenous transgender candidate to run for parliament in Peru says it’s time to end the culture of machismo in the South American country.

“I suffered, in my own flesh, the consequences of inequality, discrimination, violence and corruption,” Gahela Cari, 27, said in an interview with AFP before Sunday’s nationwide parliamentary ballot.

“We have to stop educating future macho men,” she said during a break from campaigning.

Her candidacy comes as awareness of transgender people and their rights is growing in many countries.

“I’m an animal-rights advocate, an ecologist and a student leader,” Cari told AFP. “I come from that part of the left that has always fought.”

Cari, who has promised to support the anticorruption reforms of President Martin Vizcarra, is running as a candidate of the leftist Together for Peru party, which seeks to end the political crisis that led Vizcarra to dissolve Congress on September 30.

Small, thin and calm in demeanor, she sported an Andean hat over braided hair during her interview, with bright red lipstick and, tied to her left wrist, the green scarf that symbolizes support for legalized abortion.

– What motivated you to run for Congress? –

CARI: “We want trans people to have more opportunities. We don’t enjoy the same conditions as the rest of the population. It’s no coincidence that our life expectancy is less than 32 years. Here the state doesn’t guarantee our rights.”

“(Congress) has been more concerned with defending the corrupt. I’m tired of traditional politics. That’s why I entered politics, to put Congress at the service of the citizenry.”

– How do you present yourself to voters? –

CARI: “I introduce myself as a trans, indigenous, migrant woman. I was born in the south of the country. My mother is from Ayacucho and my father is from Puno. In this country we receive an education that aims to repress who we are, to repress our sexual identity and to repress our cultural identity. They force us to be ashamed of our roots.”

“In a country that teaches you to be ashamed, a country that educates in order to repress you, to describe yourself as an indigenous trans person is already revolutionary. It is using your body to fight; fighting without even uttering a word.”

– What is the main point in your platform? –

CARI: “We want to finish (Vizcarra’s) political reform, to complete the reform of the justice system and to launch an economic reform that guarantees the voices of the citizenry and of vulnerable populations.”

“We do not want the situation facing women and LGBTQ people to continue, which is why we are proposing a reform to put the fight against gender-based violence and all forms of discrimination on the table.”

“We’re fighting to decriminalize abortion in all cases because we don’t believe that a democratic state can continue to condemn a woman to be a mother against her will.”

– Is it true that you practiced prostitution? –

CARI: “I had to be involved in prostitution though I didn’t want to. It was for a short time… but it was the most complicated stage of my life.”

“It was when I was about to finish university. I had gone five days without eating and my stomach was empty. It was a matter of necessity. I got out of it thanks to a network of contacts and thanks to feminists who saved my life.”

– Were you also a catechist? –

CARI: “I was a catechist. I am a believer, I believe in a loving God. I believe that no religion can serve to justify hate.”

– If you studied law, why aren’t you practicing as a lawyer? –

CARI: “After finishing my university studies, those in charge refused to let me join the professional association. Without that membership, you can’t work, though I tried hard. That depressed me for a while.”

– Is it difficult to campaign in a country with a tradition of machismo? –

CARI: “We have had to face situations of discrimination throughout the campaign. We have been threatened and have suffered situations of harassment and physical violence.”