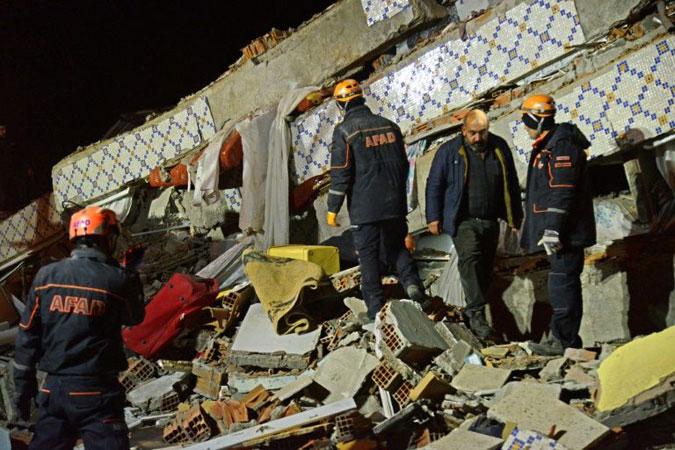 Prime Minister Imran Khan Saturday expressed grief over the loss of life and properties caused by the earthquake hitting the eastern parts of Turkey.

“Our thoughts and prayers are with the brotherly people and government of Turkey. We stand by the Turkish leadership and people in this hour of distress,” the prime minister said, also expressing solidarity on behalf of the whole nation.

He said Pakistan stands by them and is ready to lend any assistance in this hour of need. He also sympathized with the bereaved families and prayed for early recovery of the injured.

According to Turkish official news agency, the deadly earthquake hitting eastern Turkey had killed at least 22 people and injured more than 1,000 others.

The 6.8-magnitude quake hit eastern Elazig province on Friday, with its epicenter in Sivrice district, along with neighboring provinces and countries including Syria and Georgia.

President Dr Arif Alvi also expressed deep grief over the deaths and destruction caused the deadly earthquake hitting the eastern Turkish province on Friday. “The people of Pakistan share the grief over their Turkish brethren and stand by them,” the president remarked. He also prayed for peace of the departed souls and early recovery of those injured in the tragedy.

Foreign Minister Shah Mehmood Qureshi expressed grief over the casualties caused by earthquake in Eastern part of Turkey. He expressed his deep sorrow over the human loss and damage to the infrastructure. He observed that the whole Pakistani nation was standing by Turkish leadership and masses in this difficult time.

Qureshi prayed that May Allah Almighty rest the departed souls in eternal peace and grant courage to members of bereaved family to bear this irreparable loss with fortitude. He also prayed for early recovery of the injured.

According to the Inter-Services Public Relations (ISPR), Chief of Army Staff General Qamar Javed Bajwa also expressed condolences over the loss of lives in Turkey. The military’s media wing further said that a contingent of the army, including a special rescue and relief team and field medical facilities, has been readied as part of the assistance offered to Turkey by the Pakistan government.

Later in the day, Foreign Minister Shah Mahmood Qureshi said he had spoken to his Turkish counterpart Mevlut Cavusoglu and extended condolences on behalf of the president, prime minister and the entire nation ‘for lives lost in the devastating earthquake’. “Pakistan has offered to send field hospital and rescue team to assist. Our thoughts and prayers are with the Turkish nation,” said Qureshi, in a statement on Twitter.

In Turkey, rescue workers are continuing to search for some 30 people buried under the rubble of collapsed buildings in Elazig province and neighbouring Malatya, said Health Minister Fahrettin Koca. He warned that the death toll could rise. Emergency workers and security forces distributed tents, beds and blankets as overnight temperatures dropped below freezing in the affected areas. Mosques, schools, sports halls and student dormitories were opened for hundreds who left their homes after the quake.

“The earthquake was very severe, we desperately ran out (of our home),” Emre Gocer told the state-run Anadolu news agency as he sheltered with his family at a sports hall in the town of Sivrice in Elazig. “We don’t have a safe place to stay right now,” he said.

At least five buildings in Sivrice and 25 in Malatya province were destroyed, said Environment and Urbanisation Minister Murat Kurum. Hundreds of other structures were damaged and made unsafe. AFAD said in a statement that 17 people were killed in Elazig and four in Malatya. Some 1,030 people were hurt.

Television footage showed emergency workers removing two people from the wreckage of a collapsed building in the town of Gezin. Another person was saved in the city of Elazig, the provincial capital, and two more from a house in Doganyol, Malatya. AFAD said 28 rescue teams were working around the clock. More than 1,300 personnel from 39 of Turkeys 81 provinces were sent to the disaster site.

Turkish President Recep Tayyip Erdogan said on Twitter overnight that all measures were being taken to “ensure that the earthquake that occurred in Elazig and was felt in many provinces is overcome with the least amount of loss.”