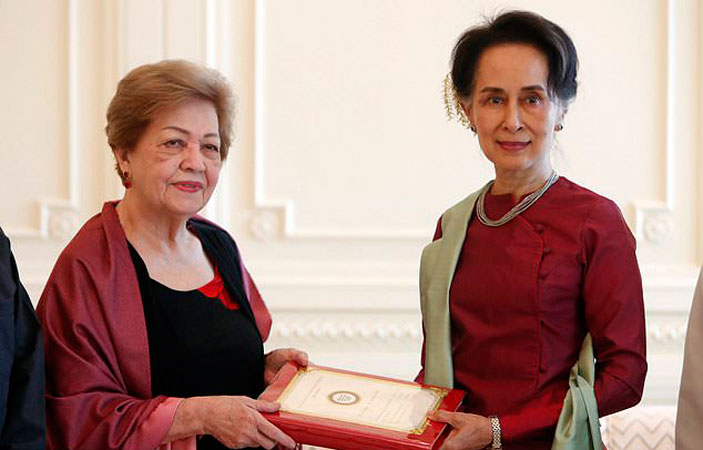 When Myanmar’s Aung San Suu Kyi walked into the International Court of Justice last month, she gambled the remaining shreds of her hard-won international reputation on a rebuttal of accusations that her country’s military committed genocide against minority Rohingya Muslims.

The court was not persuaded. This past week, it ordered Myanmar to take all possible measures to prevent genocide against the Rohingya.

Suu Kyi’s willingness to defend human rights abuses on the global stage was a move more likely aimed at burnishing her nationalist credential at home rather than swaying the court.

For her former admirers, Suu Kyi’s defense only underlined her responsibility for failing to at least speak out in defense of the Rohingya.

“With this ICJ ruling, she has suffered a spectacular fall from grace,” said Bill Richardson, a former U.S. congressman and U.N. ambassador. “She has gone from a Nobel Prize champion of democracy to just another dictator wanting to maintain her power by defending military repression, genocide, and the banishment of the Rohingya.”

After taking the helm of Myanmar’s nascent pro-democracy movement in 1988, Suu Kyi’s brave defiance of military rule, at high personal cost, made her the object of worldwide adulation. She won the 1991 Nobel Peace Prize, cited for being “one of the most extraordinary examples of civil courage in Asia in recent decades.”

When her nonviolent struggle finally paid off in 2015 with a smashing election victory by her National League for Democracy party, there was optimism that Myanmar had finally turned a corner after decades of military rule.

Former President Barack Obama commended Suu Kyi for “her tireless efforts and sacrifice over so many years to promote a more inclusive, peaceful, and democratic” Myanmar.

Then came the crackdown.

In 2017, Myanmar security forces launched a counterinsurgency operation in western Rakhine state that, compelling evidence shows, involved mass rape, killings and the burning of entire villages. More than 700,000 Rohingya fled to neighboring Bangladesh, reluctant to return until their basic rights including citizenship are guaranteed.

“My dear sister: If the political price of your ascension to the highest office in Myanmar is your silence, the price is surely too steep,” the South African wrote in an open letter.

Richardson is less diplomatic in expressing his dismay.

He had accepted Suu Kyi’s invitation to join an advisory board on the Rakhine crisis. But in early 2018, when he suggested to Suu Kyi that two Reuters reporters arrested for exposing abuse by the security forces be released, she reacted furiously. Disillusioned, he quit the board.

“I could see the reformer and former champion of democracy … turning into a power-loving and entrenched leader,” he said. “She was becoming an apologist for the military so she could hold onto her power and get reelected. She simply could not tolerate any dissent, even from her longtime friends and supporters like myself.”

Ahead of this week’s court ruling, Suu Kyi wrote an op-ed in the Financial Times newspaper in which she said “international condemnation” had a “negative effect” on efforts to make progress in Rakhine.

“It has undermined painstaking domestic efforts to establish co-operation between the military and the civilian government,” she wrote. “It hampers our ability to lay the foundation for sustainable development in a very diverse country.”

Political realities play an important role in Suu Kyi’s position. Despite her party’s landslide election victory, the military retains huge influence in government due to clauses it inserted in the constitution. She has no direct control over the security forces.

To exercise real power, her party must mobilize popular and electoral support.