Mexican children take up arms in fight against drug gangs 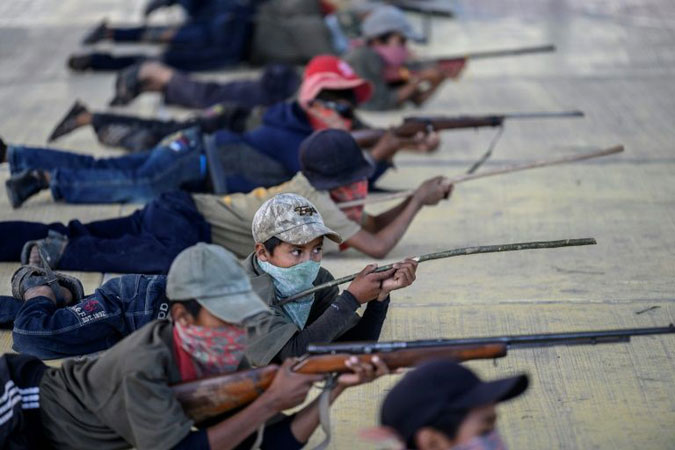 With baseball caps and scarves covering their faces, only their serious eyes are visible as a dozen children stand to attention, rifles by their side. In the heart of the violence-plagued Mexican state of Guerrero, learning to use weapons starts at an early age.

In the village of Ayahualtempa, at the foot of a wooded hill, the basketball court serves as a training ground for these youths, aged between five and 15.

The children practice with rifles and handguns or makeshift weapons in various drill positions for a few hours every week.

“Position three!” yells instructor Bernardino Sanchez, a member of the militia responsible for the security of 16 villages in the Guerrero area, which goes by the name of Regional Coordinator of Community Authorities (CRAC-PF).

Guerrero is one of the poorest and most violent parts of Mexico, with one of the country’s highest murder rates because of drug gang wars over the trade in opium and marijuana.

In the face of indifference from the authorities, 600 people voluntarily joined the militia force to fight organized crime. They included children.

At Sanchez’s order, the young people perform a drill and throw themselves face down on the ground in a cloud of dust, rifles aimed towards an imaginary enemy. Their opponent may be imaginary for the exercise but the drug cartel violence which plagues the region is all too real.

A week ago, nine men and a child — musicians and their assistants — were kidnapped and tortured, and their charred bodies were found inside their two vans at the bottom of a ravine.

Mexican authorities immediately recognized the handiwork of the local Los Ardillos cartel but did not take any action against it.

Exasperated by official indifference, leaders of communities across the region, including Ayahualtempa, decided to take matters into their own hands and teach their children to shoot.

Thirty children are in training. Those under the age of 13 are not yet taking part in patrols but are ready to fight in the event of an attack by Los Ardillos, as happened in May 2015 when the cartel entered the town hall of Chilapa and kidnapped more than 30 people.

Since then, clashes between the militia and the drug traffickers have not abated.

Near the training ground are some abandoned ramshackle huts.

Inside are clothes, children’s shoes and bags of rotten corn cobs — everything left as it was when the occupants fled.

‘They must defend themselves’

The situation has become so untenable for the inhabitants of the region that parents have agreed to let their children join the militia.

“I wanted to study, but since the school is close to the area where Los Ardillos operates, I preferred the community police … They were about to capture me,” said 13-year-old Gustavo.

The boy said he “feels good” holding his .22 caliber shotgun and already knows how to use and clean it.

Gustavo’s father Luis has been a member of the militia for three years.

His other son, Gerardo, 15, is also learning to “defend himself and his family,” he said during training.

“The children decided to support us,” said Luis, who recalls the day when his two children told him they wanted to arm themselves and leave school.