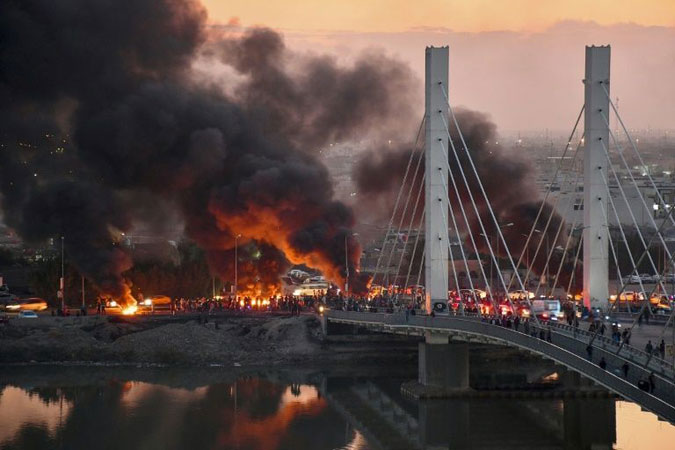 It came a day after populist politician Moqtada Sadr organised his own mass rally demanding US troops leave Iraq before announcing that he would no longer back the separate youth-dominated protest movement demanding sweeping reform.

Within hours, security forces had stormed a protest camp in the southern port city of Basra, forcibly dispersing activists, an AFP correspondent reported.

Their tents were burned down and municipal staff could be seen clearing the charred remains to reopen the square.

Many demonstrators were seen taking down tents in the cities of Hilla, Diwaniyah, Kut and Amarah.

A medical source told AFP six protesters had been wounded.

Demonstrators had blocked off Tayaran Square and the Mohammad Qasim highway in east Baghdad since Monday in an attempt to pressure the government to enact long-awaited reforms.

Ahrar Bridge, which links east Baghdad to western districts that are home to government buildings and embassies, had been partly occupied by protestors in recent months.

Protesters in Baghdad’s Tahrir (Liberation) Square, the main rallying point for the protesters, told AFP they heard live rounds and saw smoke bombs on Saturday as police sought to pin them back. The security forces did not storm the square and a police source told AFP there was no plan to do so yet.The protesters had long feared that if Sadr withdrew his support, they would lose political cover.Sadr, a militiaman-turned-cleric, is notorious for switching political positions with dizzying speed.