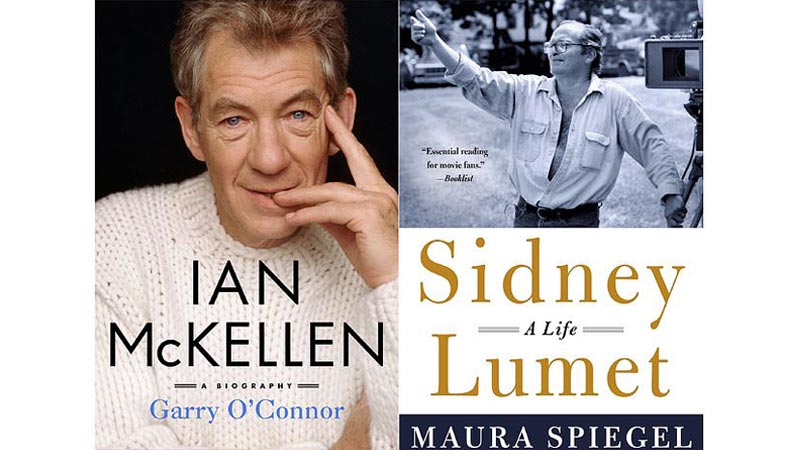 New biographies of director Sidney Lumet and actor Ian McKellen shed welcome if uneven light on their stellar careers in theater, film and television while exploring events that shaped their desire to entertain and challenge audiences.

While not achieving the public recognition of a Hitchcock, Spielberg or Scorsese, Lumet (1924-2011) directed many memorable films, chief among them “12 Angry Men,” “Serpico,” “Network,” “Dog Day Afternoon” and “The Verdict.” He was born in Philadelphia, but his Polish father soon moved the family to New York, the city that would become the setting of many of his films.

Actors held Lumet in high regard because of his performance-centric approach to filmmaking. His peers took note of his intense preparations, demands for rehearsal and ability to shoot efficiently and maximize lean budgets, skills he learned in the fast-paced world of live television in the 1950s. But acting wasn´t everything in a Lumet film. Biographer Maura Spiegel points out how his lighting, camera and editing techniques highlighted a story´s emotional impact.

When Lumet adapted for film Eugene O´Neill´s play of family dysfunction and madness, “Long Day´s Journey into Night,” he knew the essence of the material all too well. His father was a prominent actor in the Yiddish theater and, at home, a self-absorbed ogre. Lumet´s mother suffered from mental illness and died in middle-age childbirth, her son 15.

Lumet had been on the stage from childhood, moving from the Yiddish theater to a Broadway debut at 11. He appeared in more than a dozen Broadway productions and a feature film before he was 17. As a director, his appreciation of the craft of acting and the complexities of human frailty seemed to draw him to family and professional dramas. His box-office successes were relatively few, but he seldom failed to deliver a compelling story.

McKellen, now 80, was unknown to most American audiences until his turns as Gandalf in Peter Jackson´s films of J.R.R. Tolkien´s beloved novels “The Lord of the Rings” and “The Hobbit” and as Magneto in the “X-Men” movies. He had been in films the previous three decades – critics hailed him in “Richard IIÏ” and “Gods and Monsters” – and had been a powerhouse in the British theater even longer.

Not unlike Lumet, McKellen´s relationship with his educated, middle-class British parents appears to have affected him deeply, at least in biographer Garry O´Connor´s telling. Both parents loved the theater and enjoyed a happy suburban life in North England. But McKellen´s mother died of cancer when he was 12 and his father, a Christian pacifist, tended to keep his emotions private. A lonely, shy and introverted teenager, McKellen kept his homosexuality to himself and, O´Connor says, turned endlessly ambitious in a bid for the love he needed.

Like Lumet, McKellen felt drawn to acting from childhood, though not professionally until after his years at Cambridge. It´s easy to believe that these men who lost so much early in their lives may have found comfort in examining the lives of others through make-believe. In real life, Lumet´s political views were leftist while McKellen´s focused on gay rights, having come out publicly just before turning 49.

While strong on personal details, these biographies can be unsatisfying at times. Too often Spiegel dashes past Lumet´s films and doesn´t ponder some of his more consequential partnerships, such as the one with Sean Connery, his star in five films. The reasons for Lumet´s artistic stumbles – the musical “The Wiz” and the Western love story “Lovin´ Molly” come to mind – are often unexplored. Spiegel’s nonlinear approach to relating events fosters repetition and tests a reader’s patience. So much of McKellen´s career came in the British theater that it´s understandable O´Connor, himself a playwright and director who worked with McKellen, focuses on that period. Readers whose interests lie outside the stage, however, may find the book a slog. O’Connor’s appearances in the text as a witness to events or as an interviewer can feel heavy-handed at times. Spiegel, too, frequently slips into first person at the cost of breaking a biographical narrative already fractured by subheads.

Both Lumet and McKellen pondered writing memoirs but ultimately chose not to share memories of fraught childhoods and other unhappy times. In their stead, these biographers answer many, if not all, the questions about their subjects – and rekindle interest in their subjects’ film and TV work. Those who haven´t watched McKellen in “Richard III” or “Gods and Monsters” or Lumet´s “Fail Safe” or “Running on Empty” are missing fine performances and fine films.