US-Iran conflict to be a disaster bigger than Afghanistan’s: PM 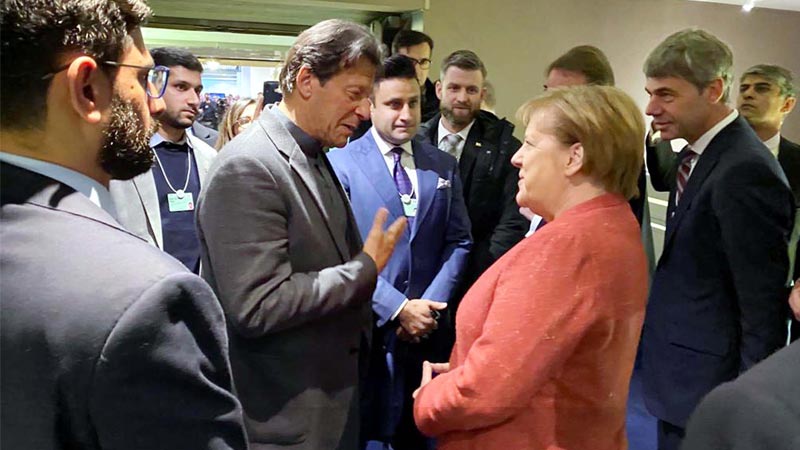 Prime Minister Imran Khan Thursday said any conflict between the United States and Iran will be a disaster, reiterating that instead of providing solutions, wars always beget more issues.

“It will be a disaster if this conflict takes place between the US and Iran … trust me Iran will be much much more difficult conflict than even Afghanistan,” the prime minister said in an interview with CNBC’s Hadley Gamble on the sidelines of the World Economic Forum in Davos, Switzerland. Calling the US readiness for dialogue ‘sensible’, the prime minister said despite passage of 19 years, the solution to Afghan conflict is yet being found out with the parties still trying to keep the peace talks and ceasefire going. “Still people are dying in Afghanistan. This is 19 years. Over a trillion dollars spent on it. Does the US want another conflict,” he asked? “People should never rely on military solution. You use military to solve one problem, five other problems pop up – unintended consequences.”

“A conflict right now with Iran will be a disaster for developing countries … oil prices will shoot up. Countries like us, who are just about balancing our budgets, everything will go up and it will just cause poverty,” the prime minister said. “People who try and solve issues through bloodshed and war, always cause mayhem in the world,” he added.

Highlighting the Kashmir issue, the prime minister said he cannot say what could be the outcome of Kashmir issue as India has been taken over by the extremist ideology of Hindutva, seeking Hindu supremacy. Besides taking steps to change the demography of the disputed territory though constitutional amendments and putting eight million people under siege, the prime minister said, India has also enacted legislation for ethnic cleansing of Muslims in India. He expressed his fear that the situation could spill over to other parts in the region and called for the international community’s role for taking steps to deter Indian designs.

Asked about his government’s performance on the economic front, the prime minister said they inherited a bankrupt and indebted economy with huge fiscal and current deficit. “It took a year to stabilize the economy and fortunately it has stabilized now. Market sentiment has gone up. Foreign direct investment has risen by 200 percent in one year and now we are moving to export-led growth, rather than consumer or import-led growth,” he remarked.

To a question, the prime minister said year 2019 has been the safest year since 2003, courtesy to the security forces who controlled the crime and disarmed the militias, following the consensus among all the political parties. Rubbishing the notion of CPEC as a debt trap for Pakistan, the prime minister said China assisted the country at the time when it was at rock bottom for what “we are thankful to Chinese to come and rescue us.”

Moreover, China will also transfer agriculture technology to Pakistan to enhance the yield besides assisting to train the youth, he said.

Separately, speaking at ‘Breakfast at Davos’ event, Prime Minister Imran Khan said his vision for a strong Pakistan is revival of industries for wealth creation, to be spent on the uplift of underprivileged segments in a welfare-oriented society. “Pakistan is about hope and I believe that with its immense potential and determination, the nation will thrive,” he said.

Stressing the importance of good governance, he said institutions can get deteriorated quickly, but their revival always takes a lot of time and effort. He mentioned corrupt system as the biggest challenge in slow implementation of reforms of institutions. “It is like everyone wants to remove the tumor, but does not want to have the pain of surgery,” he said, adding the moment nation realized the importance of good governance, the country will make progress.

Prime Minister Imran Khan said big dreams lead to bigger achievement if supported by struggle and commitment. “Going after a big mission, never ever think of compromising,” he said, adding that he wants the nation to never give up in difficult times and be patient.

He mentioned that foreign debts by previous governments resulted in putting undue pressure on common man and said he would soon take up the matter with stakeholders on how to reduce burden on electricity consumers.

Imran Khan highlighted his government’s export-oriented approach to attain economic stability and mentioned reduction in current fiscal deficit by 75 percent which ultimately reflected in 200 percent increase in foreign investment. “I am confident that Pakistan is on the right track,” he said, adding that staying steadfast during challenges is important to achieve goals.

Meanwhile, Prime Minister Imran Khan invited Koc Holdings, Turkey’s largest conglomerate, to consider investments in energy, tourism and hospitality sectors in Pakistan. He was talking to Chief Executive Officer (CEO) of Koc Holdings Levent Cakiroglu, who called on him here in Davos. The prime minister appreciated the long association and presence of the company in Pakistan since 1953.

Separately, Prime Minister Imran Khan, while assuring full cooperation of the government to investors and businessmen, stressed on environment-friendly green technology in line with the government’s ‘Clean & Green Pakistan’.

He was talking to James Quincey, Chairman and Chief Executive Officer (CEO) of Coca-Cola Company who called on him at Davos.

He appreciated the long association and presence of the company in Pakistan since 1953. He stated that the government has initiated an effective reforms agenda to facilitate ‘ease-of-doing-business.’