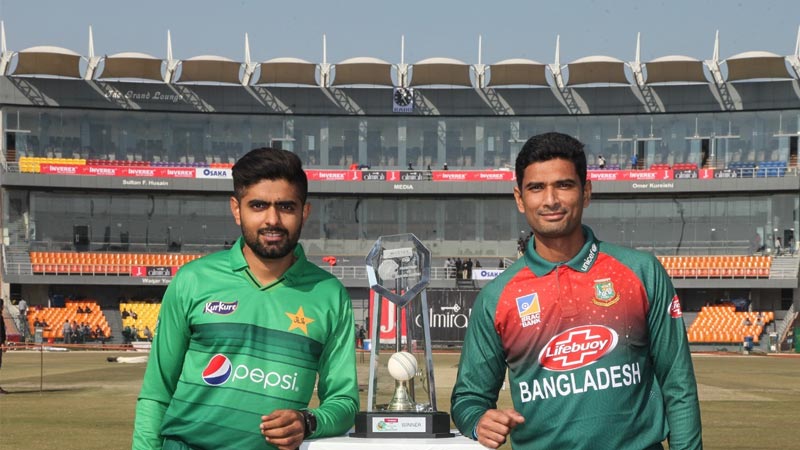 LAHORE: Pakistan’s number one ICC Ranking will be at stake when they take on Bangladesh in the first match of a three-match Twenty20 International series at picturesque Gaddafi Stadium here on Friday (today). Babar Azam will captain Pakistan at the venue where 13 years ago he served as a ball-picker in the second Test between Pakistan and South Africa. The 25-year-old, since making his international debut in September 2016, has moved to the top of the ICC batting charts following his consistent performance in the shortest format of the game against all opposition in different conditions. To compliment his T20I ranking, he is ranked seventh in Tests and third in ODIs – a hallmark of a batsman who is on course to achieve greater heights. He is only the second batsman in circuit with an average of over 50 in Twenty20 Internationals. He has scored 1,405 runs in 36 matches at an average of 50.17 and only India’s Virat Kohli is above him, averaging 52.72 after scoring 2,689 runs in 78 matches. Appointed Pakistan captain in September 2019, this will be the first time the Lahore-born star will captain his country in front of his home crowds. He previously led Pakistan in Australia where his side was swept aside 2-0 in a three-match series, but he still managed to standout by striking two half-centuries. Babar has played 10 T20Is at home and it is no surprise that he has always left a big mark. He has scores of 86, 45, 48 (against ICC World XI in Lahore), 34 not out (against Sri Lanka 2017), 17, 97 not out, 51 (against the West Indies in Karachi) and 13, 3 and 27 (against Sri Lanka in Lahore).

“Captaining your country is the biggest responsibility and honour one can get. I have always aspired to play hard but fair cricket, and that’s what I will like to do as long as I am representing Pakistan. Since the tour has been announced, I have been excited about the prospect of leading an extremely talented bunch of players onto the field,” Babar said at a press conference on Thursday. “Frankly, this is what I used to dream as a young boy, and that dream is now about to turn reality. No matter how young or experienced you are, learning process continues. This series will also be part of that process, having said that there will be no room for ordinary performances. We are expected to deliver the goods every time we represent Pakistan and there will be no change to that philosophy.”

Though Pakistan are the world’s No. 1 T20I team, but they are just a defeat away from being dislodged from the top of the rankings. They presently have 270 points, just one more than Australia at No. 2. Anything other than a 3-0 win in the upcoming T20I series over Bangladesh — even a 2-1 win — will see Pakistan slip below Australia. Bangladesh, meanwhile, are at No. 9 with 227 rating points. “We are focused on continuing our world No. 1 ranking and that can happen only if we ultimately win the series,” Babar said. “When you think that you have to retain your position and it comes to a do-or-die match then we have to plan accordingly. Our aim is to win the series. No team can be taken lightly nowadays, but we are positive and will try to play good cricket. Overall we have made very good preparations — we played four practice matches and the team has gelled and we hope we will give you good results.”

Pakistan have held on to the top spot since January 2018, but they haven’t won a T20I for nearly a year, with their last win coming in February 2019 against South Africa. They lost eight of their nine completed games in the format last year. They still hold the No. 1 ranking because of their remarkable record in the time before this recent string of poor results: between January and November 2018, they won 17 out of their 18 T20Is. Veterans Mohammad Hafeez and Shoaib Malik were both part of Pakistan’s team when they went on that winning run, and they are both back in the side now, on the insistence of Babar and Misbahul Haq, Pakistan’s coach-cum-selector, even if there was no consensus among the six regional selectors on the issue. Babar hinted that the prospects of Hafeez and Malik beyond the Bangladesh series would depend solely on their performance. “We will give them a proper chance. We expect them to perform. We will give them all three games and there will be the PSL after that, so with time the picture will be clear and then we will see. We made changes in the team because we had to, since players who were not in form had to be replaced.”

Bangladesh captain Mahmudullah said that the hosts were a strong side. “Pakistan may have not played up to potential in the last few series but they are a strong side. I am sure they are concerned about their series loss to Sri Lanka,” he added. “But we are focused on our game. Ranking wise they are way ahead as they are the No 1 team in the T20I format and we are in ninth position. But as a captain I am hopeful because of the way we have played in the last few series, we can achieve good results in the series against Pakistan.” Bangladesh were dealt a blow after senior batsman Mushfiqur Rahim opted out of the tour citing security concerns, who are already without suspended all-rounder Shakib Al Hasan. However, experienced opener Tamim Iqbal has made a return to the T20I squad, who has played several seasons of the Pakistan Super League, and was part of the World XI that visited Pakistan in 2017 for a three-match series. All three matches of the T20I series will be day games. The previous nine T20Is at the Gaddafi Stadium were all night games, with Pakistan winning five and losing four. The highest total at the venue is 197, while the lowest is 101.