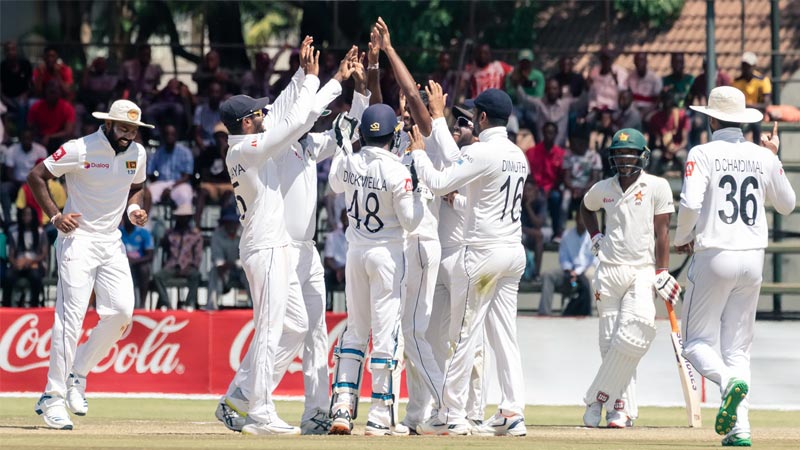 Fast bowler Suranga Lakmal claimed four scalps to help dismiss Zimbabwe cheaply as Sri Lanka wrapped up a 10-wicket victory on the final day of the first Test at the Harare Sports Club on Thursday. Resuming on 30 without loss, Zimbabwe were bowled out for 170 in their second innings, leaving Sri Lanka to knock off 14 runs for the win. Lakmal took 4-27 in 20 overs as he ripped through the top order with Zimbabwe losing three quick wickets for the addition of just eight runs in the morning session. He had Prince Masvaure (17) caught by wicketkeeper Niroshan Dickwella in his first over, while Brian Mudzinganyama (16) was dismissed lbw in his second.

First innings top-scorer Craig Ervine (7) was the victim in his third over, caught by captain Dimuth Karunaratne at short leg. Following that setback, the hosts moved the score to 120 before Lakmal claimed the prized wicket of Brendan Taylor (38), who showed no movement of the feet as he picked out Kusal Mendis at mid-on. Zimbabwe tried to bat time after that, but when Lahiru Kumara (3-32) ripped through their lower order with the second new ball, their fate was sealed. Sri Lanka amassed 515 for nine declared in their first innings, with Angelo Mathews unbeaten on 200. Zimbabwe won the toss and elected to bat first, scoring 358. The second Test will start on Monday at the same venue. Zimbabwe returned to Test cricket for the first time since their tour of Bangladesh in 2018. They were briefly suspended by the International Cricket Council last year because of government interference. agencies