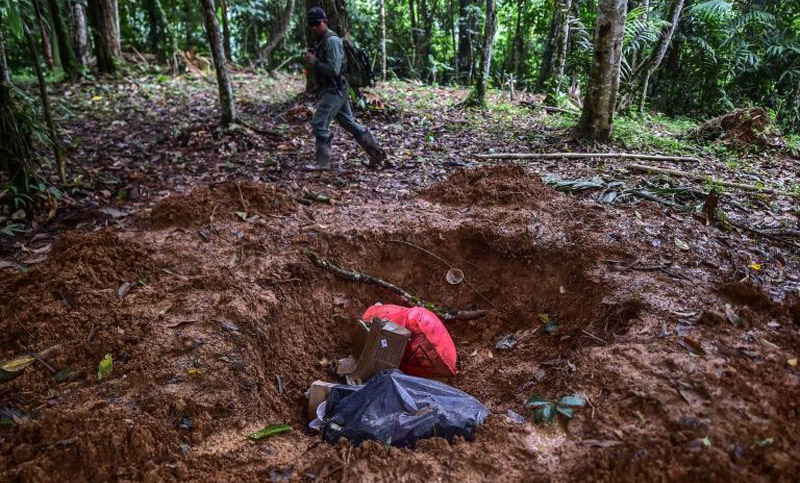 A week after six children and a pregnant woman were sacrificed in a brutal religious ritual, the inhabitants of a remote village in northwestern Panama fear they might be next.

“No-one can sleep. As soon as they hear a cricket or a cockroach everyone’s on high alert,” said Pacifico Blanco.

Blanco lives in Altos del Terron, an isolated indigenous community where the victims of the ritualistic killings were found last week in a mass grave.

Bibles, messages alluding to the devil and a heap of rope can still be seen at the site of the massacre — a makeshift church in dense jungle that was used by an obscure sect that called itself “God’s New Light.”

Police raided the church on January 15, arresting 10 people and rescuing 15 captives, including children, they believe were being prepared for sacrifice.

The mass grave was found a day later, about an hour away from the church.

Vegetation and walls kept the church almost invisible to the outside world and the local community had no idea what was taking place inside.

Police reinforcements were flown in by helicopter to the village, around 250 kilometers (150 miles) from Panama City and hard to reach.

Besides protecting the local community, the police are looking for other such sects.

This latest incident came just a month after 17 foreigners belonging to another sect were arrested in the coastal town of San Carlos.

The police presence in Altos del Terron has brought little relief to residents who fear there may be more murderous sect members lurking in their midst.

“We don’t sleep, either by day or by night, nor do we rest,” the local indigenous chief, Evangelisto Santos, told AFP.

Since the murders of the six children aged between one and 17, and the pregnant woman — the mother of five of the victims — many villagers have taken to living together in the deeply religious community.

Safety in numbers, they believe, will help protect them from any other potential sects in the area.

“Honestly, I spend my nights sad and worrying about the fate of the nephews and nieces that have been left with me,” said Edison Rios, the dead woman’s brother.

“Its upsetting to think about them. Who knows if they will come back today or tomorrow and finish off the remaining children?”

According to the public prosecutor, the 10 suspects, now in preventive detention, tied up their victims and beat them to death with Bibles, sticks and machetes.

The pregnant woman was killed in front of her children, who were then murdered too. Survivors said the sect leader claimed he was carrying out God’s orders to “remove the demon” from the victims in a violent exorcism.