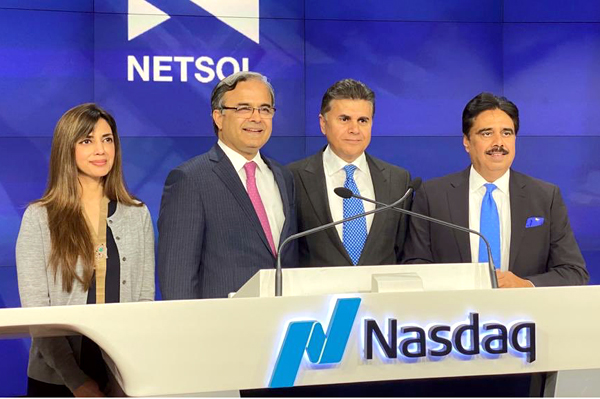 NEW YORK: Pakistan’s Ambassador to the United States, Asad Majeed Khan, Tuesday rang the NESTOL closing bell at the NASDAQ Stock Exchange in New York at a prestigious ceremony that signals the end of trading for the day on Wall Street.

NASDAQ is the premier United States Stock Exchange, while NESTOL is an international software solutions company with extensive operations in Pakistan. The company is headed by Najeeb Ghauri, a Pakistani-American entrepreneur.

The event was carried live on a giant screen overlooking the crowded iconic square as well as by major American television networks on their economic and financial segments.

The closing bell ringing marked two decades of NESTOL being listed on NASDAQ. The company has a robust international presence in nine countries and a team of 1500 resource persons in Pakistan and all over the world.

NESTOL’s solutions have resulted in over US $ 200 billion in transactions worldwide.

In Oct. 2019, NESTOL also partnered with the Embassy of Pakistan in Washington D.C. to organize the first Tech Summit in Silicon Valley where a number of Pakistani startups and tech companies also participated.

Tuesday’s bell ringing ceremony at NASDAQ was a unique honour for Pakistani Chief Executive Organization Najeeb Ghauri, as it underscored the potential of Pakistani IT leaders and companies.

Pakistan’s Consul General in New York, Ayesha Ali, was among those present.