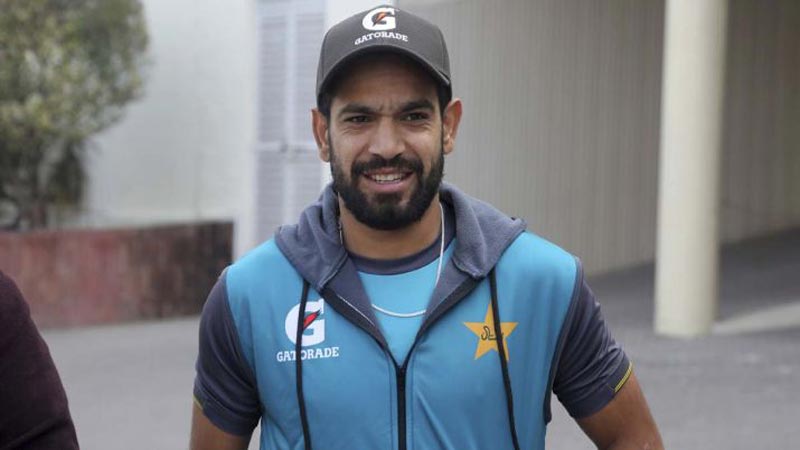 Haris Rauf wants to make a big splash in his international cricket debut. Showing no sign of nerves days out from his first match for Pakistan, Rauf is determined to finish the Twenty20 International series against Bangladesh starting on Friday as the best bowler. The 26-year-old said Tuesday that he was excited to make his debut in front of the home crowd. “I am not under pressure. I know people are excited about me and expecting a lot. To be honest, it is an honour for me that people are talking about me and I think it will give me confidence,” Rauf told reporters. “It’s a home series and I feel proud that I will make my debut at home. Insha’Allah we will try to win the series, my target is to be the best bowler of the series. I will give my 100% and I will try to perform for my country as I have done in the BBL,” he added.

Rauf was first spotted by Lahore Qalandars of the Pakistan Super League in 2017 during an open trial. The fast bowler was groomed by Cricket World Cup-winning pacer Aqib Javed at the Qalandars, and he’s really made himself known in the ongoing Big Bash League. Rauf constantly bowled at more than 140 kph in Australia and took 16 wickets in seven matches for the Melbourne Stars, including a hat trick and a five-wicket haul. That earned him selection for Pakistan’s T20Is against Bangladesh.

“I have set a target for myself and that is to be the best bowler of the series,” Rauf added. “I have been performing well in the Big Bash League and will try to replicate that for my country.” For the BBL, Rauf was drafted for three games initially when his idol Dale Steyn was injured. But when he bowled effectively with the old ball in death overs, he played seven matches before he was called up by Pakistan. “I don’t think a bowler gets ignored if he knows he can bowl at 140 kph plus,” Rauf said. “Whatever training I do, I try to maintain the pace. I touched 150 kph in Big Bash, but it’s not in my mind. My aim is to bowl consistently at 140 kph plus.” Rauf is one of four young fast bowlers in the Pakistan squad, after the selectors dropped the experienced Mohammad Amir and Wahab Riaz with an eye on finding talent and wins before the T20 World Cup in October. No. 1-ranked Pakistan lost eight of nine T20s last year. Rauf’s transition into the national team has been eased by the presence of Qalandars teammate and fellow fast bowler Shaheen Afridi. “I have played with him in the PSL,” Rauf said. “I will get another chance with him and I hope it will help us to perform.” Rauf is also looking forward to working with Pakistan’s bowling coach Waqar Younis and learn from his experience. “Waqar Bhai is an experienced guy and a prolific pacer of his time. He is an inspiration for young pacers in the team,” he said. “The way I bowl in the death with reversing yorkers, Waqar bhai used to do that really well. He had control on his reverse so I will try to perfect that when I work with him and I am hopeful I will learn a lot.”