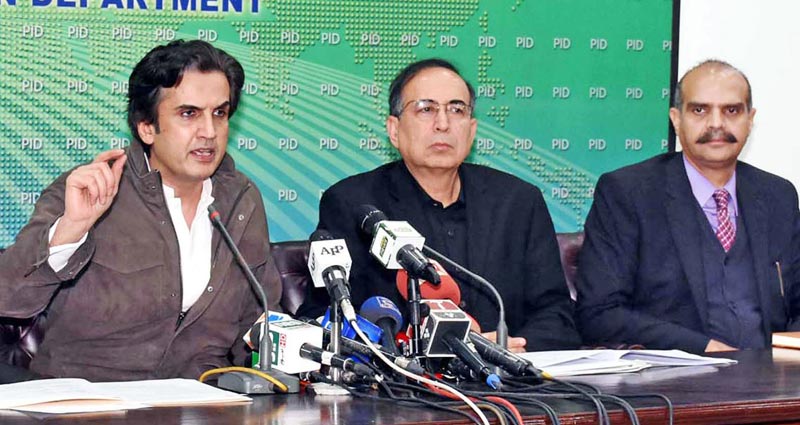 Minister for National Food Security and Research Makhdoom Khusro Bakhtyar on Sunday said sufficient wheat stock was available in the country to fulfil the domestic requirements of flour, and expressed firm resolve to take strict action against those involve in hording, profiteering or creating artificial crisis of the commodity in the domestic markets.

Addressing a press conference, he said current scenario of wheat and flour emerged due to multiple reasons that included transporters’ strike in Karachi which had affected the supply in the local markets of Sindh, and the ban on inter-provincial movement of wheat between Punjab and Khyber Pakhtunkhwa to curb its smuggling.

He informed that wheat supply to Karachi was enhanced to 10,000 metric tonnes from 9,000 metric tonnes and wheat-laden trucks of National Logistic Cell had already left, adding that the federal government had assured the provincial government of providing 50,000 tonnes more wheat from the PASCOs go-downs on requirement.

He said the supply to Khyber Pakhtunkhwa, which was disturbed due to inter-provincial checks, was also realigned and supply to the province was increased from 4,000 metric tonnes per day to 5,000 tonnes.

Besides, the private sector was also supplying 4,000 tonnes to provincial markets, he said, adding that the supply for KP would be enhanced by 10,000 metric tonnes from Monday.

The minister said the flour mills of Punjab was provided 390 metric tonnes of wheat, adding that total demand of Lahore city and adjoining areas was recoded at 180,000 bags of 20kg per day.

Out of the total requirements, the Food Department was supplying 140,000 bags and 35,000 bags were provided by the private sector, he said.

He said that around 40,000 metric tonnes of wheat was smuggled to Afghanistan per month, and special measures were also made to check this smuggling to keep the supply smooth in local markets. The minister said a special helpline was also established to monitor the wheat supply in local markets and wheat procurement targets were also enhanced from six million tonnes to eight million tonnes to keep the strategic reserves for local requirements.

To a question, he said the incumbent government had attached higher priorities with the agriculture sector and initiated development projects worth Rs 300 billion to enhance the output of major crops, including wheat.

Meanwhile, Special Assistant to Prime Minister (SAPM) on Information and Broadcasting Dr Firdous Ashiq Awan on Sunday said a mafia was creating artificial shortage of wheat and flour by purchasing the commodities from local markets in a bid to whiten their black money.

Addressing a news conference, she said 368 sale points and 181 truck points had been set up to ensure smooth supply of wheat flour to people.

She said indiscriminate action was being taken against elements involved in hoarding of flour. She said more than 25,000 tonnes of wheat was being provided to some 814 flour mills in Punjab on a daily basis.

She said Prime Minister Imran Khan had directed the government to ensure early provision of 400,000 tonnes of wheat to Sindh province, out of which Sindh had yet lifted 100,000 tonnes.

She said the federal government had taken full responsibility of fulfilling the basic food needs of people of the country. She said the Sindh government showed negligence in purchase of wheat on time and miserably failed to manage demand and supply gap in the province.