‘Dolittle’ — talk about a cinematic heap of yak dung 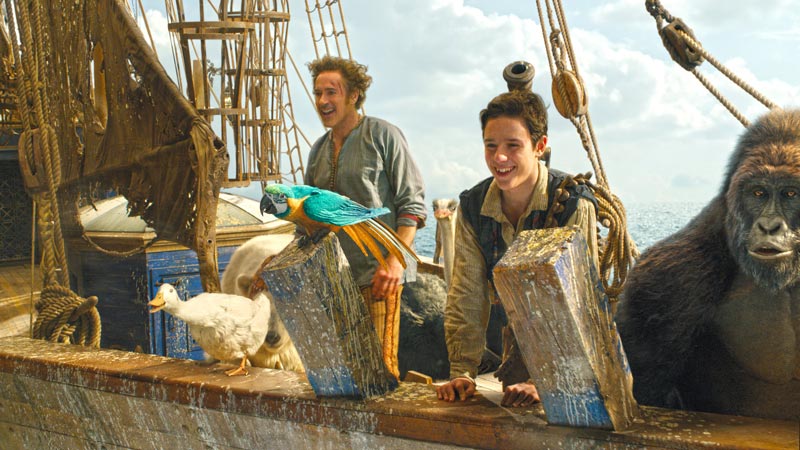 Robert Downey, Jr talks to the animals in Dolittle, an object lesson in cinematic incoherence that would be easy to dismiss as a hot mess if it could even raise a temperature. Instead, this out-and-out disaster dissolves in a puddle of botched intentions that will leave children sad and confused and adults scratching their heads. Dr. John Dolittle, the beloved British veterinarian created by author Hugh Lofting a century ago, has been previously used and abused by Hollywood, first in 1967 with a soporific musical version starring Rex Harrison, and later by Eddie Murphy in a forgettable 1998 update that spawned a 2001 sequel and a trio of drecky, direct-to-video spinoffs. Still, this latest take tops them all for scraping bottom.

Rumours of a troubled production and expensive reshoots may help explain the film’s floundering incompetence. Credited (if that’s the word) to writer-director Stephen Gaghan – best known for heavy dramatic lifting in Syriana and his Oscar-winning script for Traffic – Dolittle represents his futile search for a light touch. There really is no excuse for the harm done to Downey, a world-class actor who’s sucked down into this quicksand of a movie that even Iron Man couldn’t salvage. Let’s start with that accent: Is it British? Welsh? Scottish? Some amalgam of all three? His dialogue appears to be dubbed; at times, his lips don’t move with what he is saying And when he is actually decipherable, it’s all in service of a plot that defies logic or basic human interest.

The good doctor is introduced as a bearded, slovenly hermit, wallowing in his sorrows at Dolittle manor after the death of his explorer wife, Lily (Kasia Smutniak). Nothing like a soul-sick widower to bring in the kiddie audience. Having rejected his fellow humans, the good doctor relies on his menagerie of animals. We know this because Poly the parrot (voiced by Emma Thompson) tells us so. Her voiceover narration is used in place of genuine storytelling and characterization, the usual elements that guide us through a film.

What passes for a plot involves Lady Rose (Carmel Laniado), an emissary from the young Queen Victoria (a criminally wasted Jessie Buckley), who lies dying from a mysterious illness in her palace. The queen believes that only Dolittle can cure her. Unmoved by Lady Rose or the plight of the queen or the intrusion of Stubbins (Harry Collett), an animal-loving boy who has accidentally shot a squirrel, our hero is finally stirred to action by his pet pals who may lose their sanctuary if the queen perishes. Trumpian-like palace officials, played by Jim Broadbent and Michael Sheen, care nothing for the life of all creatures great and small – or, for that matter, the environment.

So Dolittle and company set off to save the queen by sailing to an exotic island ruled by King Rassouli (Antonio Banderas). The doctor’s father-in-law blames him for his daughter’s death, so he unleashes Barry the tiger (Ralph Fiennes, the voice of Voldemort) on him. Later, the gang must travel even further to find the mythical Eden Tree, whose fruit can cure the queen. What? How? Why? The answers are not forthcoming – where are you, Poly? – as the movie lurches around as if there’s no one at the helm. Which there isn’t, even though Teenage Mutant Ninja Turtles director Jonathan Liebesman was dragged in to do reshoots. Presumably, the tykes can thank him for the fart jokes. 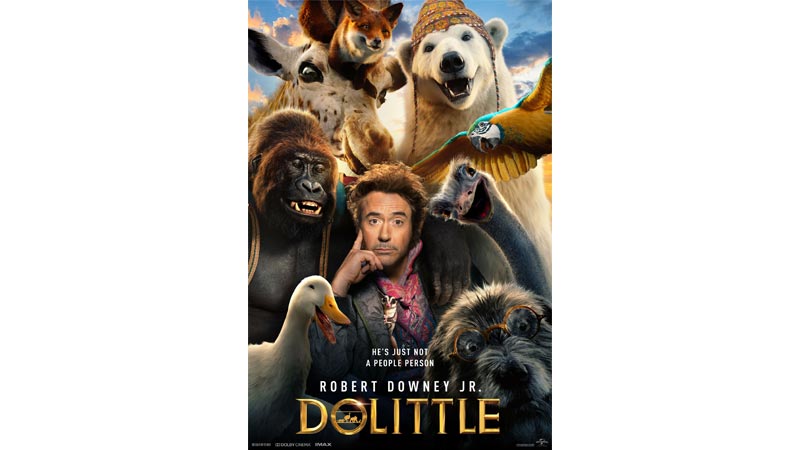 For grownups, there is one Godfather joke. That leaves the talking animals to distract the kiddies. Good luck with that. The filmmakers broke a reported $175 million budget to hire cash-hungry stars to do the voices. There’s Rami Malek as Chee-Chee, a fraidy-cat gorilla; Octavia Spencer as the silly duck Dab-Dab; Kumail Nanjiani as Plimpton, a quarrelsome ostrich; John Cena as Yoshi, a roly-poly polar bear; Marion Cotillard as a revolutionary fox named Tutu; and Tom Holland as Jip the dog. The canine can’t see without glasses. What’s Gaghan’s excuse? His direction is blind to nuance and the disaster he’s created.

The low point comes when the doctor pulls a bagpipe out of a dragon’s ass. Cue more prodigious farting. It’s typical of the film’s tone-deaf sound design that a tiny dragonfly (Jason Mantzoukas) and a hulking dragon (Frances de la Tour) talk at the same volume level. What’s amazing is that Gaghan didn’t drag in the cast of Cats to complete his misbegotten animal kingdom. Both of these movies have one thing in common: They should never have been made.

Dolittle is a 2020 American fantasy adventure film directed by Stephen Gaghan, from a screenplay by Gaghan, Dan Gregor, Doug Mand and Chris McKay and a story by Thomas Shepherd.

The project was announced in March 2017 with Downey Jr. set to star, and the rest of the cast joined over the following year. Filming began in March 2018 and lasted through June, taking place around the United Kingdom. The film underwent three weeks of reshoots in the spring of 2019, under the supervision of Jonathan Liebesman and Chris McKay, after initial test screenings yielded poor results. Dolittle was theatrically released in the United States on January 17, 2020, by Universal Pictures. The film received negative reviews from critics.