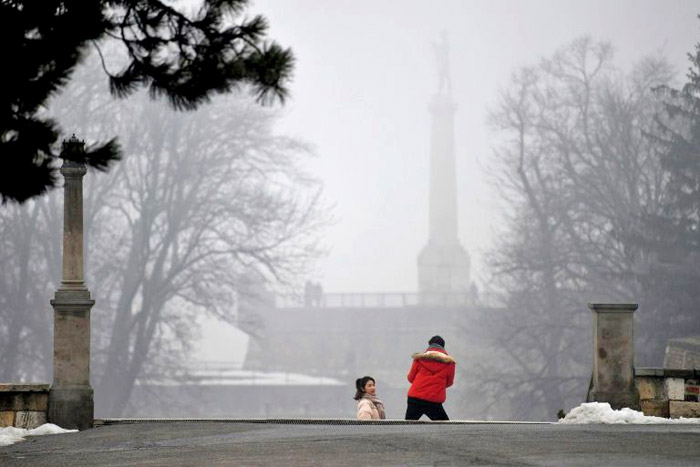 As winter grips the Balkans, the poor are caught in a cruel bind, being forced to light fires at home for heating while fuelling a pollution crisis smothering the region.

In recent weeks, Balkan capitals from Belgrade Sarajevo to Skopje and Pristina have been ranked among the world’s top 10 most polluted major cities, according to the monitoring application AirVisual.

While these are small cities compared to leading Asian polluters like New Delhi and Dhaka, a combination of coal-fired power plants, old cars and fires to heat homes are pumping the air with toxins.

“I know it is polluting. I am not an idiot but my only other choice would be to heat this home with electricity and that is damn expensive,” said Trajan Nestorovski, who like many in his working-class Skopje neighbourhood burns wood to stay warm in winter.

His wife Vera added: “There are a couple of factories near our neighbourhood that are burning God knows what in the evenings”.

Thanks to the rise of mobile phone apps that measure air quality, like the local Moj Vozduh (My Air) created by a Macedonian developer, citizens are finally grasping the full extent of the crisis.

“Serbia is suffocating, has anyone seen the minister of the environment?”, said a recent headline in Belgrade’s local Blic newspaper, speaking of the fog and dirty air enveloping the city.

Protests have been erupting around the region in recent days. In Skopje, the capital of North Macedonia, young people have taken inspiration from Swedish activist Greta Thunberg by holding a spate of protests on Fridays.

“Greta inspired all of us,” said 17-year-old Iskra Ilieska.

“In winter, half of my school class is absent because of lung problems. That is not normal,” she said.

In neighbouring Bosnia, several hundred people wearing face masks gathered in the city of Tuzla this week to demand a plan from authorities to tackle pollution and phase out coal-fired plants in the next five years.

“The only recommended measures are that we stay shut up at home… when you go out on the streets, in the playgrounds, you won’t see children anywhere,” said Alisa Kasumovic, a mother in her forties.

The main sources of the dust, soot and smoke are low-grade coal plants and household heating, the report said.

More than 60 percent of people in the region rely on coal and firewood to heat their homes, the report said. Only 12 percent of buildings are connected to district heating systems.

Many people cannot afford cleaner heating options at home in countries where average wages are around 500 euros or less. Sali Ademi, a 78-year-old in Kosovo’s capital Pristina, uses coal.