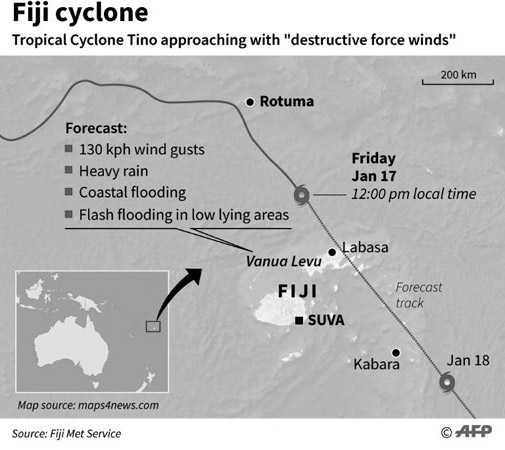 Fiji opened evacuation centres and warned of “destructive force winds” Friday as a cyclone bore down on the Pacific island nation for the second time in three weeks. Two people were missing after attempting to swim across a swollen river late Thursday when heavy rain fell ahead of the advancing Cyclone Tino, police said. On the outer islands, locals prepared to go to emergency shelters while many tourists fled beach resorts and made their way to the capital Suva before regional flights and inter-island ferry services were suspended. The Fiji Meteorological Service said Tino was strengthening as it headed for Fiji’s second-largest island, Vanua Levu, warning of wind gusts of up to 130 kilometres per hour (80 mph), heavy rain, coastal flooding and flash flooding in low lying areas. “I’m preparing to go to an evacuation centre soon with my family and wait for the cyclone to pass,” Nischal Prasad, who lost his home in northern Vanua Legu when Cyclone Sarai struck just after Christmas, told AFP. “Sarai destroyed my house and almost left my family homeless. My daughters had to hide under their bed from the strong winds. It was a scary experience,” he said.