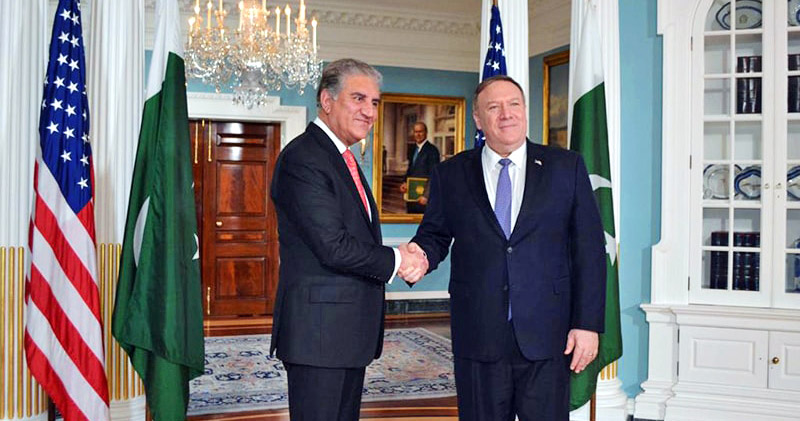 Foreign Minister Shah Mehmood Qureshi on Friday said resolution of Kashmir dispute in accordance with the UN resolutions is vital for brining permanent peace and stability to the South Asian region.

Foreign Minister Qureshi met US Secretary of State Mike Pompeo in Washington. The two leaders exchanged views on matters pertaining to Pak-US bilateral cooperation, regional security situation, Afghan peace process, and ongoing massive human rights violations in Indian-held Kashmir. He expressed regrets that the BJP-led Indian government has besieged millions of Kashmiris by imposing ruthless curfew and other restrictions in the occupied valley. He said the Indian government has imposed ban on media in the region to hide facts from the world.

Qureshi said Pakistan is committed to play its due role in de-escalating prevailing tensions and promote peace in the Middle Eastern region. He further said that Pakistan will continue its efforts for political solution to lingering Afghan conflict. He also briefed the US secretary on his meetings with various leaders during his recent visits to Iran and Saudi Arabia.

The foreign minister underlined the need of strengthening bilateral trade and investment to materialise the joint vision of Prime Minister Imran Khan and US President Donald Trump.

The US secretary lauded Pakistan’s sincere and utmost efforts for political solution to Afghan conflict.

Meanwhile, in an exclusive interview with Fox News, Foreign Minister Qureshi on asked the United States for a ‘responsible’ withdrawal of troops from Afghanistan and not to repeat the mistake of 80s. “Pakistan is asking [the US] for a responsible withdrawal unlike 80s which created a vacuum for the destructive forces to take over,” he said

Qureshi said Pakistan facilitated a dialogue with Taliban on the request of President Trump ‘in a hope for peace and stability’.

To a question on primary goal of his recent talks with Iranian president Hassan Rouhani, the foreign minister said it was aimed at de-escalation and diffusion of the conflict to avert negative effects in the region. On Afghan peace process, he expressed hope of an agreement between the US and Taliban. “The Taliban are today talking to US and there is a possibility of an agreement,” he said, mentioning about Thursday’s announcement by Taliban of a ceasefire of 7-10 days before they could take next step leading to dialogue.

Asked about the role of Inter-Services Intelligence (ISI) in supporting the Haqqani network, the foreign minister said, “Let’s not discuss the past but future, which is in everybody’s interest.” However, he mentioned ISI’s support for the Afghan peace process. “ISI has been supporting the peace process. They have been facilitating and have used their little influence to bring the Taliban to negotiation as the US asked for, which they delivered,” he said.

To a question as if Prime Minister Imran Khan will participate in the Shanghai Cooperation Organization’s regional summit to be held in India this October, he said, “The prime minister is very very clear that if India takes one step, Pakistan will take two.”

However, he regretted that unfortunately India is showing a negative attitude. “Look at the repression and use of force going on, and the legislative work undertaken that saw protested all over India,” he said in reference to the siege in the occupied valley and the controversial passage of bills targeting minorities, particularly Muslims.

Separately, speaking at an event of reputed American think-tank Centre for Strategic and International Studies (CSIS) on ‘Reframing the US-Pakistan Strategic Relationship’ in Washington DC, Foreign Minister Qureshi urged on the United States to work with Pakistan as it politically mainstreams and economically develops the former tribal areas. He said supporting economic activity along the Afghanistan-Pakistan border will benefit both sides.

Qureshi, in a conversation moderated by CSIS President John J Hamre, Senior Vice President Daniel F Runde and Senior Adviser Seth G Jones, touched several issues of regional and global importance ranging from Afghan peace, US-Iran standoff, Jammu and Kashmir situation and Pak-US bilateral ties. He stressed that the recent tension between the US and Iran must not put any negative impact on the peace process in Afghanistan, adding that “having come this far, there should be zero tolerance for any setbacks.”

He said both Pakistan and the US have shed too much blood and expended too much treasure and now must “honor the memory of our fallen soldiers and countrymen by successfully accomplishing the mission in Afghanistan.” He said Pakistan has long argued that there is no military solution to Afghanistan with Prime Minister Imran Khan is one of the first leaders in the region who consistently advocated a political route towards peace in Afghanistan.

Considering Afghanistan a shared responsibility, he said Pakistan is playing its role and warned other stakeholders to be vigilant against ‘spoilers’ as “not every country in the broader region wants to see peace in Afghanistan”.