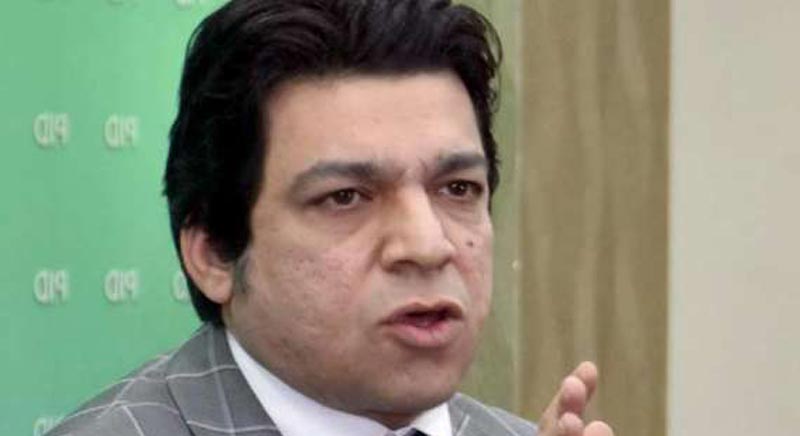 Leaders of the opposition parties on Wednesday slammed Federal Minister for Water Resources Faisal Vawda for his outlandish stunt on a TV show last night, during which he used a boot to to heap scorn on the PPP and PML-N for voting in favour of the recently passed Army Act in parliament.

The PTI minister appeared on private Tv channel talk show alongside senior PPP leader Qamar Zaman Kaira and PML-N Senator Javed Abbasi on Tuesday night. Mid-programme, while discussing PML-N supremo Nawaz Sharif, Vawda pulled out a boot and placed it on the desk in front of the guests. Both Abbasi and Kaira eventually left the show in protest.

PML-N spokesperson Marriyum Aurangzeb, while speaking on Wednesday, said that Vawda’s stunt did not dignify a response.

However, former law minister and PML-N leader Rana Sanaullah, while appearing on another TV show last night, said that the entire nation was witnessing activities of “jokers”, adding that “the government wanted to make a joke of the army as an institution”.

PPP leader Sherry Rehman also condemned Vawda’s behaviour. “This can’t be normalised, no matter what the point of the parody,” she said in a tweet. “Disappointed and disgusted that public discourse has sunk to this level.”

“It is everyone’s right to critique another’s actions but this, this plumbs new depths. Cheap thrills just got a whole lot cheaper,” she added.

No PTI leader has yet commented on the incident.

During last night’s show, while responding to a question regarding Nawaz’s health, Vawda said that “shameless” people stoop to any level.

He said that no deals were being made.

“In order to save your theft and to escape the country […] you laid down and gave respect to the boot. You have announced this,” he said as he pulled out an actual boot. “In every programme, I will keep this with me, this is today’s democratic N-League.”

“You [the PML-N] should have given it respect earlier like we have been doing,” he said, referring to the boot he was holding.

The host, Abbasi, joked that he thought Vawda was pulling out a gun, a reference to an earlier stunt by Vawda, but in fact he had “pulled out something even more dangerous”.

“You are talking against them (armed forces’ personnel) even when they embraced martyrdom. Today, when it comes to their loot and plunder Maryam Nawaz and Nawaz Sharif should hold this (the boot) and tell the people that we will respect the boot and do everything (to save us),” Vawda said.

The PTI minister did not spare PPP and asked why it took back the amendments it had proposed earlier in services chiefs’ legislation.

A visibly offended Kaira said that Vawda meant that the PPP and the PML-N had voted for the Army Act not on the request of the PTI government but under the pressure of the army. Vawda clarified that this was not what he was saying.

“He came with a lot of fervour and put the boot here and created a mockery of the army,” Kaira said.

At one point, Abbasi asked Vawda who the boot belonged to, to which he said: “Ask them (PPP and PML-N)”. He eventually removed the boot, in response to which Kaira wryly remarked that he should leave it on the table.

Both the PML-N and PPP leaders eventually walked out of the show.

Clips of the PTI minister’s stunt were circulating on social media on Wednesday morning, with trends such as #PTIDisrespectArmy, #FaisalVawda and #Kashif Abbasi trending on Twitter.

While PTI supporters were seen praising the minister on social media, others expressed regret over the episode and criticised the minister for dragging armed forces by creating an avoidable controversy.

Senior journalist Mazhar Abbas tweeted: “Faisal has disgraced the Institution by bringing the shoe into controversy in otherwise popular talk show. He has not only exposed himself but the party as well. Let us see how the PM will react and above all how the Institution will take it.”

No stranger to controversy

This is not the first time the water resources minister has made headlines for his controversial remarks and actions. In 2018, he showed up in a bulletproof vest and armed with a pistol at the Chinese consulate general’s office in Karachi minutes after authorities foiled a terrorist attack there.

In June 2019, while appearing on a TV talks show, Vawda had remarked: “If we had it in our power to hang 5,000 people, the future of 220m people would be transformed”.

Vawda has also clashed with journalists in the past. In January 2019, Vawda’s brash response to a senior journalist’s question led to the cancellation of a press conference in Islamabad.

As the press conference started, reporter Khaleeq Kiani had reminded the minister how his party had criticised an LNG deal during the PML-N government on the basis that it was awarded on a single-bid basis.

Vawda did not take the query kindly, saying: “I could have expected such a question from him only. I am not responsible for something that happened before my birth.”

He also had a heated exchange with PML-N leader and former prime minister Shahid Khaqan Abbasi in 2018 over allegations of water theft.