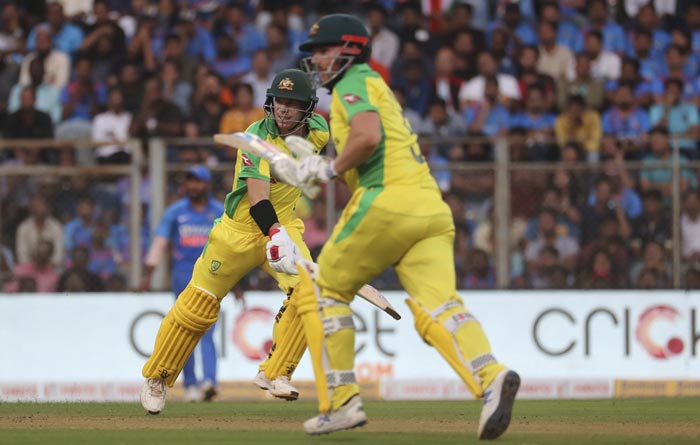 MUMBAI: David Warner and Aaron Finch smashed centuries as Australia thrashed a lacklustre India by 10 wickets in a one-sided first One-Day International at Wankhede Stadium in Mumbai on Tuesday (January 14). India were bowled out for only 255 in 49.1 overs with Shikhar Dhawan top-scoring with 74 off 91 balls. Mitchell Starc (3 for 56), Pat Cummins (2/44) and Kane Richardson (2-43) were among the wickets while Adam Zampa got the crucial wicket of Virat Kohli. Australia made light work of the chase, getting there in 37.4 overs without losing a single wicket. Warner made 128 off 112 with 17 fours and 3 sixes, while Finch was 110 off 114 with 13 fours and two sixes. Having posted a moderate total, the only chance for India back into the game was through early wickets. However, that was not to be as Warner and Finch got going straightaway. The pitch was wonderful to bat on under evening lights, and the ball came on to the bat beautifully. Finch and Warner showcased their strokeplay as India’s pacers struggled for rhythm. They were either too short or too full, and Australia’s openers dealt those with pulls, cuts and drives to the boundary. Australia raced to 84 for no loss in the first 10 overs. India turned to spin but that didn’t produce results too; Finch took on Kuldeep Yadav while Warner attacked Jadeja. A desperate return to Bumrah didn’t help too.

Earlier, India lost Rohit Sharma early, caught at mid-off by David Warner off Starc. Dhawan and KL Rahul then put up a 121-run partnership for the second wicket, steadying the ship and setting a base. However, India could not make use of the platform as they lost four wickets in the space of five overs between 28 and 33. Rahul was steady at the other end till he chipped Ashton Agar to Steve Smith at cover when he was on 47 off 61. Dhawan fell in the next over when a leading edge off Pat Cummins popped up to mid off. Kohli, batting at No. 4, began with intent smashing Adam Zampa for a six over long on but in the very next delivery was caught and bowled to the spinner. It was all downhill from there, as Shreyas Iyer departed in the next over edging Mitchell Starc to the keeper. Rishabh Pant and Ravindra Jadeja forged a 49-run stand for the sixth wicket but India could not get a strong finish.