‘American Vandal’ Season 2 is a little more serious, but in a good way

* Then came the inevitable questions: Would there be a second season? And more importantly, could it live up to the hype? 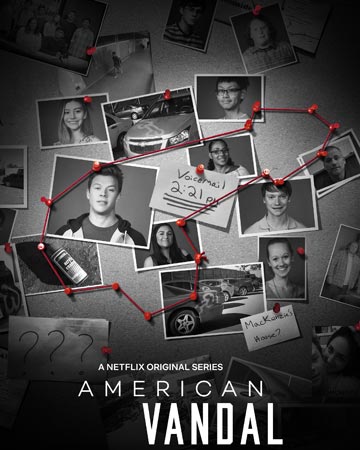 Who’da thunk that a true crime mockumentary would turn out to be one of Netflix’s best original shows?

The first season of American Vandal, created by Dan Perrault and Tony Yacenda, became a sleeper hit following its 2017 debut, gaining traction through word of mouth until the case of penis-graffiti artist Dylan Maxwell (played brilliantly by Jimmy Tatro) was all that many TV fans could talk about.

Then came the inevitable questions: Would there be a second season? And more importantly, could it live up to the hype?

The second season of mockumentary web television series ‘American Vandal,’ all eight episodes of which dropped on September 14, 2018 seems to be set for a home run as far as audience expectations are concerned. Set in a different high school but with the same documentarians as season one, season two’s focus is on Kevin McClain, who’s suspected of being the “Turd Burglar” – a culprit so named for a string of poop-related crimes, including a school-wide diarrhoea-inducing attack dubbed “the Brown-Out.” (Don’t eat while watching the new season, or you may find your appetite spoiled.)

For his part, McClain doesn’t seem like the kind of kid who’d be interested in pulling off such a stunt – whereas season one’s Dylan was an established class clown, McClain is the class weirdo, affecting a semi-English accent, posting videos online where he tries different kinds of teas, and proclaiming himself the “Fruit Ninja,” per the popular mobile game. And so, Peter (Tyler Alvarez) and Sam (Griffin Gluck) set about trying to investigate his innocence.

Despite the silly set-up, American Vandal’s second season isn’t as devoted to eliciting laughs as its predecessor. As pretentious as that may sound, season two is a little more serious, and though it successfully pulls off the tonal shift, American Vandal becomes a fundamentally different show in the process. Those wishing for a “same but different” rehashing of the first season may be disappointed by the second, but the change is in the show’s favour. It’s smarter about the teenagers it focuses on, as well as about society’s modern relationship with social media.

The second season of mockumentary web television series ‘American Vandal,’ all eight episodes of which dropped on September 14, 2018 seems to be set for a home run as far as audience expectations are concerned. Set in a different high school but with the same documentarians as season one, season two’s focus is on Kevin McClain, who’s suspected of being the ‘Turd Burglar’ — a culprit so named for a string of poop-related crimes, including a school-wide diarrhoea-inducing attack dubbed ‘the Brown-Out’

Season one was surprisingly thoughtful, peering into the inner lives of its teenage cast while acknowledging the impact that such a documentary would have on their lives. Season two is not only still thoughtful, it’s also more purely a showcase, doing away with most of American Vandal’s DIY feel (which is explained in-show by Netflix backing the student filmmakers) in favour of a clearer access route to the issues it wants to discuss.

More often than not, when young people are depicted in movies and TV using their phones to consume and participate in social media, it’s as a way of making fun of them. They’re narcissists, they’re braindead, they’re not living their lives to the fullest extent – the list goes on, usually within the black and white matrix of “phones, bad; no phones, good.”

Black Mirror’s evisceration of modern technology is perhaps the most obvious example of such a work, though it’s a bit too bleak to really be comparable to a show like American Vandal. Closer on the tonal spectrum is the recent Jumanji, which managed to be surprisingly insightful about female friendships, but still bought into the supposed brain-rotting aspect of smartphones, featuring a character who claimed to feel the rest of her senses heightened after losing their phone. It’s a stereotype that American Vandal briefly flirts with as season two begins, with most of the clues that seem to damn McClain coming from social media.

Tracking the Turd Burglar – and trying to prove McClain’s innocence – involves our teenage filmmakers extensively combing through Instagram, both to unearth past clues about pranksters at school, and to find proof of who was at which party, and when. But these posts, pictures, and videos are also simply proof that these kids exist. As the season progresses, it becomes clearer and clearer just how much each student wants to be seen, not necessarily as cool or popular, but – as sappy as it might sound – as a person, worthy of love and attention.

In that way, American Vandal is a contemporary of Eighth Grade, and even To All the Boys I’ve Loved Before, as all three works deal with just how strongly social media affects the lives of the people who use it – specifically those still in high school. The existence of social media has changed the experience of being young in a way that we’re only just beginning to reckon with, beyond reducing it to the aforementioned stereotypes.

Community and isolation go hand in hand. For these teenagers, a large part of social media is amassing followers, but they’re only offering a curated version of themselves to the world. The performance aspect is the backbone of American Vandal’s second season and, naturally, immediately sets a more melancholic tone. Nobody’s life is the way that it looks online, to the point that season two’s central mystery becomes less about the Turd Burglar and more about who these students really are.

And what makes the filmmakers’ investigation especially tricky is the gap between who the students are and who they want to be, which isn’t so much a by-product of social media as an age-old dilemma that’s exacerbated by social media.

Given the heavier core of season two, the conclusion is accordingly much darker – as well as, perhaps unsurprisingly, much more tapped into the present cultural consciousness and the horrors of online privacy (or rather, the lack of it). But this is still American Vandal, and just like in season one, darkness still comes with a balancing light.

The biggest element that sets the season apart from most other films and shows with a focus on social media is the notion that, for all its faults and potentially harmful effect, it can also provide the kind of connection that the people using it are ultimately looking for – there can be a net good.

Posting anything online can often feel like yelling into a void, which is why that connection is so powerful, and works so well in the season. The characters are, by turns, forced and then allowed to honestly examine their relationships with both each other and the world at large, which is what they’ve been looking for to begin with.

American Vandal is also still one of the smartest parodies around, as even the smallest details are grounded in a sense of reality – a segment about the school’s star athlete supposedly pulled from a sports show, for instance, or a plot point hinging on a specific 2017 iPhone glitch.

Maybe it seems like a stretch to call a show about dick jokes and poop one of the most well-crafted and self-aware works to come out of the last few years, but in season two, American Vandal has only continued to surpass expectations. The show is evolving, and it’s only fitting that the subjects it chooses to tackle – and how it chooses to tackle them – should evolve, too.

American Vandal is an American mockumentary web television series created by Dan Perrault and Tony Yacenda that premiered on September 15, 2017 on Netflix. The series is a parody of true crime documentaries such as Making a Murderer and Serial. On October 26, 2018, it was announced that Netflix had cancelled the series after two seasons; however, it was also reported that producers intend to shop the program to other venues.