Skiing is great, but for real thrills, head to Saalbach and try some mountain madness 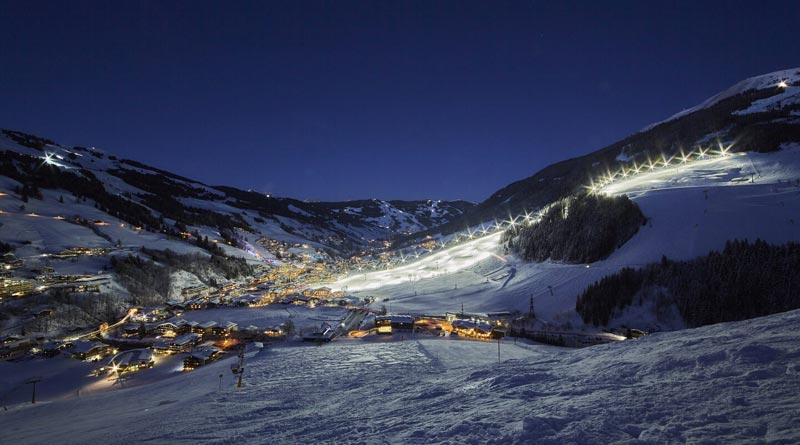 What do you do after a lavish dinner of deer tartar, steaming pork knuckle and dumplings, topped off with apple strudel, washed down with Austrian red wine and a parting shot of mountain firewater?

Why, you wobble out into the darkness of the Austrian Alps, don a crash helmet, say ‘Danke’ to a grizzled man with a piercing stare who hands you a toboggan, and proceed to hurtle down a snowy slope, all the while whooping with delight.

Saalbach may be one of the finest ski resorts in Austria, with more than 170 miles of slopes arranged in a ‘Skicircus’ of connected pistes that you can enjoy in a huge circular route. But it is also one of the best resorts for what you might call extra-curricular mountain madness. Dinner at Spielberghaus is a case in point. You are dragged up the mountain in a cage-like sled at the back of a snowcat (piste-bashing machine), devour a feast and then fly down a hill on a small plastic contraption.

This is dinner the Saalbach way, and there are plenty of other means by which to fill the gap between hanging up your skis and hitting the sack.

Terrifying zipline rides across valleys, snowtubing (zooming down slopes on inflated tyres), tandem paragliding to ‘feel as free as a bird as you fly through the air at the same height as the clouds’, tiptoeing along towering treetop walks, and snowmobile racing on bumpy mountainside tracks are just a few of the activities on offer away from the main slopes. 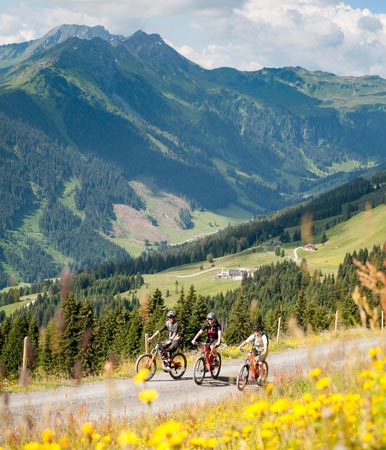 The zipline ride, called Flying Fox XXL, is not for the faint-hearted. Standing by the edge of a 470ft precipice, you are given a crash helmet, connected to a wire, wished ‘Guten Flug’ (Good flight) and released across the abyss. Down below, a pine forest spreads out as you reach speeds of 80mph before descending for one mile. The experience lasts only about 90 seconds, but your memories of it will last a lot longer.

Afterwards, if still in the mood for high adventure, head for the Golden Gate & Treetop Trail at one end of the Saalbach-Hinterglemm valley. Here you will find a 650ft-long suspension bridge spanning a canyon-like void, with the Saalbach River 140ft below.

This is much gentler than the Flying Fox XXL but it is still a very long way up and quite narrow, leading to a brilliant network of wooden walkways through the canopy of a larchwood forest. It is the highest such treetop trail in Europe. For those who have had their fill of heights, take the horse-drawn sleigh down to the Golden Gate & Treetop Trail’s car park and set off for Snowmobile City.

Once crash helmets have been distributed – seemingly the prelude to most off-piste activities – you are seated on snowmobiles and given a thumbs-up before you zoom off for a practice lap of the bumpy track. Overtaking may be performed, following carefully the instructor’s rules. The best part, though, is simply letting the throttle go on uphill sections and feeling that unfamiliar sensation of surging up the mountain.

In action-packed Saalbach, which attracts a hardy crowd, apres-ski seems to have extra gusto and the epicentre is Hinterhag Alm, a wooden barn-like building where karaoke is going strong by 4pm. The party goes on into the early hours, the later-evening hub being the club in the basement of the Saalbacher Hof hotel in the town centre. Expect live music and people generally letting loose. But that’s not to say that families are unsuited to the attractions of Saalbach. Parents with teenagers and middle-aged couples seem to have fallen for the rigorous, let-it- all-go atmosphere. But no one seems to overdo it either.

That’s the way it goes in Saalbach: ski hard, do everything hard – then get up the next day, step out into the crisp Alpine air, and do it all again.

Saalbach-Hinterglemm is a municipality in the district of Zell am See (Pinzgau region), in the Austrian state of Salzburg. It is well known for its skiing and other winter sports. A four piste network consisting of Saalbach, Hinterglemm, Fieberbrunn and Leogang is located in the municipality, adding up to 270 kilometers of ski slopes.

It is short transfer to resort from Salzburg Airport.