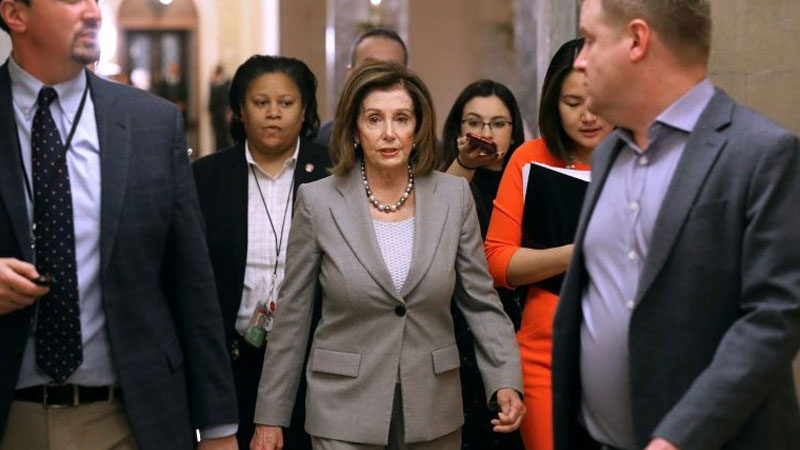 Top US Democrat Nancy Pelosi on Sunday challenged Republicans to allow a “fair trial” when Donald Trump’s impeachment case moves to the Senate, going head-to-head with the president who suggested the Senate should dismiss the charges against him outright.

Speaker Pelosi will meet with the House Democratic caucus early Tuesday to prepare for the formal vote required to send the two articles of impeachment passed by the House on to the Senate, as early as this week.

The Senate trial is expected to be held quickly, with Republicans holding enough votes to easily dismiss the charges of abuse of power and obstruction of Congress.

Trump, for his part, has said he expects rapid exoneration and wants to move past the trial as quickly as possible.

“Why should I have the stigma of Impeachment attached to my name when I did nothing wrong,” the president tweeted on Sunday. “Very unfair to tens of millions of voters!” He also renewed a call for Democrat Adam Schiff, who led the House impeachment probe, to be called as a witness — this time also demanding that Pelosi herself be made to testify.

He later said the case should be dismissed without trial, as any hearings would give undue credibility to the “witch hunt” against him.

Pelosi has withheld the articles since the House impeached Trump on December 18 over allegations that he improperly pressured Ukraine to investigate his potential 2020 election rival Joe Biden, and obstructed the subsequent congressional probe.

Pelosi had hoped to pressure Senate Republican leader Mitch McConnell to agree to allow witnesses and new evidence in the trial.

He has not budged, however.

Still, she said Sunday that the delay had accomplished important things. “We wanted the public to see the need for witnesses,” she told ABC. “Now the ball is in their court, to either do that or pay a price for not doing it.”

During the interim, she added, new emails supporting the charges against Trump had emerged, and former national security adviser John Bolton had announced his willingness to testify if subpoenaed.