PM intervenes after committee fails to reach breakthrough with MQM-P 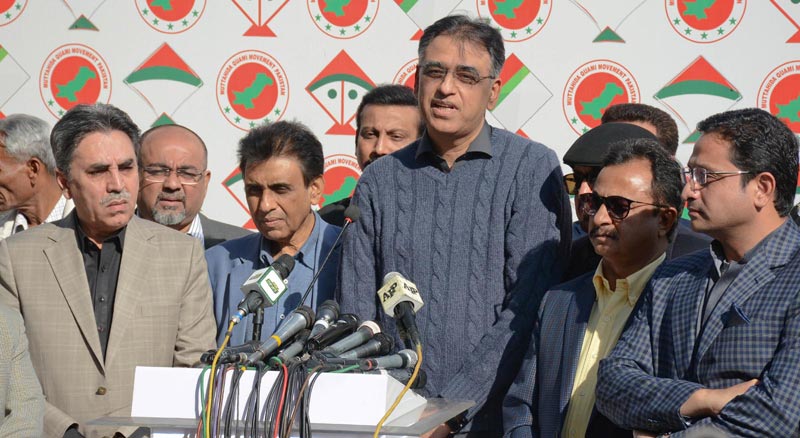 PM Imran approached the MQM-P leader and summoned him to Islamabad. During the conversation, Siddiqui put forth his reservations in front of the prime minister who assured the former that the party’s issues will be addressed.

PM Imran spoke on the matter during the media strategy committee session on Monday, where he said that the demands of the MQM-P related to release of funds, development works and establishment of educational institutions will be met soon.

Pakistan Tehreek-e-Insaf leader Jahangir Tareen also spoke with Khalid Maqbool Siddiqui. Earlier, the deadlock persisted as a delegation of Pakistan Tehreek-e-Insaf on Monday visited the headquarters of Muttahida Qaumi Movement-Pakistan (MQM-P) in an attempt to address the grievances of the disgruntled ally, which had quit the federal cabinet a day earlier citing ‘unfulfilled promises’.

The MQM-P on Sunday gave the PTI government in the Centre a jolt as Minister for Information Technology and Telecommunication Khalid Maqbool Siddiqui announced his decision to leave the federal cabinet.

In a joint press conference after the meeting on Monday, Siddiqui remained steadfast on resigning from the federal cabinet.

Umar regretted Siddiqui’s resignation and said, “I also left the federal cabinet for seven months so I understand his [Siddiqui] reluctance. Nevertheless, we want him to be a part of the cabinet.” “The parties have agreed to work together – we need to outline a plan to do so,” he added.

On MQM-P’s reservations regarding Karachi projects, Umar reiterated federal government’s commitment and said many of the ‘smaller’ projects have been completed while comparatively bigger projects are being worked on. “PM Imran Khan will be inaugurating the projects early February. Initially, we planned to give media a tour of the completed projects, however, it was decided that a launching ceremony was a better idea,” he said. “Trust me … the projects will be worth more than Rs 162 billion as promised,” he added.

Asad Umar said Karachi faces two major issues in terms of water and transport. “The National Engineering Services Pakistan (Nespak) reviewed K4 project. It is now being reviewed by Sindh government-sanctioned technical team. Once they conclude their study, we will get it approved by Executive Committee of the National Economic Council (ECNEC),” he said. “The second issue is that of transport. We are working on a straight corridor with railways and maritime ministers, and public and private enterprises. The decision on Lyari Expressway and Northern Bypass will be taken later this month,” he added.

Speaking to reporters alongside Umar, Siddiqui said he has not taken back his resignation. “Our meeting was already scheduled, it was not negotiations,” he said, adding that there was ‘nothing sensational’ in his press conference from a day ago. He once again asserted that the party has not parted ways with the PTI. “We just felt that sitting in the federal cabinet with reservations is inappropriate,” he maintained. “We promised to support the government with our numbers and we will continue to do that,” he added.