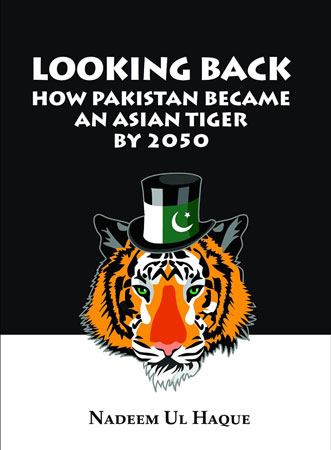 Looking Back reads like a history book imbued with comic fiction. The very thought in today’s Pakistan that our country may one day become the Asian tiger is laughable in itself. An historical account of Pakistan’s reformation set in an alternate future, the book was written by Dr. Nadeem Ul Haque, an economist, giving a blow by blow account as to how it is really possible by eliminating different threats to the system one after the other. He expounds that the winds of change will ultimately come from the unlikeliest corridors of academics and ordinary citizenry who become champions of a failed state whose inevitable doom has become a foregone conclusion.

Dr Nadeemul Haque was the Deputy Chairman of the Planning Commission in 2011 where he presented his infamous ‘Framework for Economic Growth (FEG) for Pakistan. A PhD from University of Chicago, he spent his career almost in entirety with the IMF. Chicago school of thought – what he did at IMF, gave him an insight into the workings of third world economies, a trait he employed emphatically while designing FEG. His expertise in fiscal & monetary policies gave him an acute advantage as he formulated the comprehensive framework which unfortunately was never implemented. He was also the Vice Chancellor of Pakistan Institute of Development Economics. It is most unfortunate that he could not get a chance to implement his framework – which was highly appreciated by development practitioners of the world.

Though the framework for economic growth was approved by the parliament, its implementation remained in limbo despite the fact that its expansive and inclusive approach guarantees a growth rate of 8 percent over a period of a decade to assuage an emergent demographic challenge of ‘youth bulge’. This book in my opinion is purely a manifestation of his frustrations for his inability to fix a broken system of governance despite the availability of this brilliant tool. And his ideas of RFPs also have born of his need for a seed of change.

The book is an oddity in itself. Fiction written by an economist. An economist who probably gave the country its most emphatic blueprint for economic ascendancy and societal transformation but published by one of the more obscure publishing houses in the country. An economist of his stature could’ve easily gone to one of the ‘Big Five’ and had his work published. But as he so modestly put that this is for Pakistani people’s consumption and so Kitab (Pvt.) Limited put a meagre price tag so it can be accessible to all.

Narrated from the perspective of an Egyptian Nobel laureate Daud Rashida, an economist, heading PTC [Pakistan Transformation Commission], in response to a letter by a fictional Secretary General of the UN in the year 2051, who requests commissioning of a report to glean an understanding of the country’s meteoric rise in an alternate future.

Dr. Haque takes the reader on a historical journey of Pakistan’s turbulent past from its nascence to a turning point of a “quiet revolution” in the future of this parallel universe. He recounts the ills that plagued Pakistan through much of its existence. Fundamental core issues that have retarded a real change. Germination of crony capitalism, centralization of power and decision making, laissez-faire mercantile behaviour, lack of regulations and enforcement, ineffective taxation system, absence of innovation or contemporaneous practices, conformity of colonial status quo, utter dependence on donors, religious fundamentalist tendencies, rent-seeking behaviour of the political and bureaucratic elites have impeded development of the country and encouraged suppression of the people at large.

He explains how these extractive economic institutions have crippled the Pakistani economy and is constantly increasing the rich-poor disparity. At the heart of these problems, he singles out bureaucracy, both civil and military, with its rent-seeking tendencies, as the main culprit for much of what ails the country today. An indictment of the political system, he elaborates how the colonial civil service instituted to make the people subservient was further mutated by its ‘civil servants’ to further their own outlook as to how the country must progress. Governance by the people took a back seat and the state was pushed farther and farther into the gaping abyss of stagnation. Dr. Haque also derides the donors whose priorities have slowly crept into our governance hierarchy. How it contributed to ineptness and laziness in our system.

The story of the book recounts a cataclysmic event somewhere in 2019 which precipitated a fundamental change in the fabric of our society. The change was not a revolution but an evolutionary process, a ‘quiet revolution’ as Dr. Haque calls it. The ‘agents of change’ were not discernible actors in terms of personality or a movement. They were networks of ordinary citizens who only came together for national integration and national prestige. The story identifies these agents of change as “Research For Pakistan” (RFP). These RFP networks sprang across the national strata and were essentially a platform of research and thought.

Genesis of RFPs is the awe-inspiring and provocative idea which germinated the change in Dr. Haque’s story, was an unrealized change that he had actually perceived through his framework of economic growth. An economist at heart, Dr. Haque intersperses his fictional work with real life economic policies and goes to great lengths in explaining his ideas in terms of economics principles. Complexity is one of those ideas. The change he espouses is completely organic and has no well-defined hierarchies. The interventions and course corrections come from the adaptive interactions of agents in economy.

As the story continues, narrated by Rashida, “the RFPs instigated change within themselves and propagated the idea to the masses whose demands gradually drove the political establishment to change direction. These networks facilitated better governance by highlighting the country’s issues. Widespread participation precipitated discourse and eventually paved way for constitutional reform by educating and informing the people and politicians. Electoral reforms, curtailing discretionary powers of the Prime Minister, balanced budgeting, judicial independence, legislation through private members, empowered local governments, depoliticizing service delivery and census were a few outcomes of the initial change. Also, the country was bifurcated into twenty smaller administrative units instead of five. Governments went under review a little more often due to the electoral reforms. This decentralization of government proved to be a boon for the economy and quality of life as public accountability increased.”

The rent-seeking bureaucracy had accumulated perks and privileges by collaboration and collusion with the corrupt political elites. As the political devolution took place this pyramid of power also flattened. Land holdings had long been the avenue of the rent-seeking behaviour. The reforms abolished the privileged access to land strict regulations put into place. The ‘success norm’ was re-aligned.

The private sector had long been expanding on the expense of the government as it had essentially been its integral part. Their mercantilist policies had distorted development. Donors led policies in collaboration with these industrialist/politicians had also distorted production-trade balance. Sugar, automotive, cotton, fertilizer, cement and banking sectors wreaked havoc on the economy. These industrialists exploited policies, shunned innovation and entrepreneurship and created oligopolies in these sectors.

These practices in turn gave birth to an informal economy as the trust of the people in their government vanished. The taxation system targeted this informal sector instead of ending mercantilism. The cities became large uncontrollable sprawls. Fundamentalism also became an issue in the absence of state oversight. Education and health sectors had deteriorated beyond disrepair.

However, the RFP espoused approach triggered political change which cascaded a complete transformation in a quarter of a century. This ‘bottom-up’ change broke the rent-seeking and reined in the rampant bureaucracy. Pakistani society became an inclusive one. Has had double digit growth rate for the past two decades. Literacy is all time high and one of the healthiest countries in the world. Developed governance and market systems have been the true reform.

As the Daud Rashida finished the fascinating report he notes systems were built rather than sectors. He states that prioritizing state building and supporting agents of change is the way to achieve this transformation from a failed state to a thriving one. At the end of the book, Dr. Haque does indeed paint a very rosy picture of a Pakistan none of us have thought possible.

As long as this is treated as a work of fiction, there is absolutely nothing wrong with it. But considering the fact that Dr. Haque is a serious scientist, most of his ideas are grounded in experience, this future seems a little too good to be true. Although reforms regarding local governance, decentralization and rural development are promising avenues of possible change, even they are a little too optimistic.

It is very hard to imagine even a fraction of change that Dr. Haque has envisioned. Fiscal responsibility, open economy, efficient judiciary and general well-being of our people are pipe dreams. The history of the last 75 years is diametrically opposite to the picture painted by Dr. Haque. His thesis depends on genesis of RFPs and considering our societal laziness, it all seems a little too far-fetched. Thus, book is an essential read for anyone who is inquisitive to comprehend the process of reform and process of development, especially how to trigger the two (Concluded).

The writer is a freelancer. He can be reached at saudzafar5@gmail.com