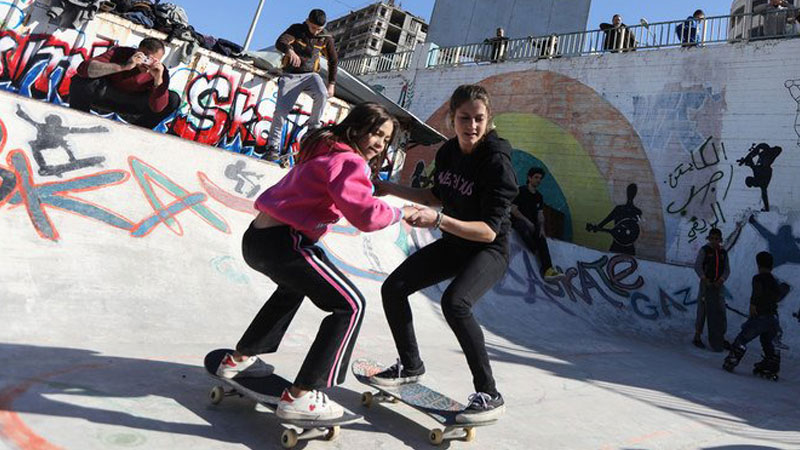 Abdullah Abu Rahma has been arrested by Israeli soldiers eight times in the last 15 years, spending weeks or months in prison and paying tens of thousands of dollars in fines for organizing protests.

He’s among a growing number of Palestinians who have embraced non-violent means of protesting Israel’s military rule and expanding settlements, and who are increasingly finding those avenues of dissent blocked.

Israel has also stepped up its campaign against the Palestinian-led international boycott movement, and the US and other countries have adopted legislation to suppress it.

Omar Shakir, the Israel and Palestine director for Human Rights Watch, said Israel has “all but declared Palestinian opposition to the systematic discrimination they face illegitimate.”

Shakir himself was deported from Israel in November over his alleged support for the boycott movement.

If it succeeds in banning forms of peaceful advocacy, he says, Israel will have “effectively left Palestinians no choice but submission to a regime of systematic repression, or violence.”

For decades, the Palestinians were branded terrorists because of their armed struggle against Israel. At the height of the Second Intifada, the violent uprising in the early 2000s, and for years afterward, observers wondered why there was no “Palestinian Gandhi.”

One candidate for such a title might be Abu Rahma, who for several years organized weekly protests in the West Bank village of Bilin.

Abu Rahma said he never threw stones and told others not to do so, partly out of concern they would hurt other protesters.

That didn’t keep him from being arrested.

Over the years he was charged with entering a closed military zone — referring to land outside the village — and hindering the work of soldiers, who were overseeing the construction of the fence.

“I don’t go to them, they come to us,” he said. In 2009 he was charged with stockpiling weapons after he collected spent tear gas canisters fired by Israeli soldiers and put them on display. He later served a 16-month prison term after a military court convicted him of incitement and participation in illegal protests.

“There have been various, multiple charges of this kind, but not once have they accused me of striking a soldier or throwing a stone,” he said. In 2009, he was acquitted on the weapons possession charge and a charge of throwing stones.

Issa Amro, another prominent activist who has organized protests against Israeli settlements in the West Bank city of Hebron, faces 16 charges, including calling for disobedience and disrupting Israeli life — the lives of settlers.

He says he has been detained on 10 occasions this year alone, usually after being beaten by settlers.

“The soldiers never did anything to stop the attackers, but they arrested me every time a settler said I attacked him,” he said. As a Palestinian, he is governed by Israeli military law, while the Jewish settlers in Hebron enjoy full rights as Israeli citizens.

“They want us basically to accept the occupation, the discrimination, the land grab, the restrictions, and not to speak up against it.”

Human Rights Watch said Israel relies on sweeping military orders, many of which date back to the 1967 Mideast war, when it seized the West Bank, east Jerusalem and Gaza, territories the Palestinians want for their future state.

Civilians can be jailed for up to 10 years for attending political gatherings of more than 10 people or for displaying flags or political symbols without army approval, Human Rights Watch said. Military orders ban 411 organizations, including every major political movement, it added.

“After 52 years, Israel’s sweeping restrictions of the basic rights of Palestinians can no longer be justified by the exigencies of military occupation,” Shakir said.

“Palestinians are entitled at minimum to the same rights Israel provides its own citizens.” In response to questions about the Human Rights Watch report and the restrictions on protests, Israel’s Ministry of Foreign Affairs accused the Palestinian leadership of seeking to “attack Israel in the international arena” rather than trying to end the conflict through negotiations.

Peace talks broke down after Netanyahu was elected in 2009. In September, he vowed to annex large parts of the West Bank, a move that would almost certainly extinguish any remaining hope of creating a Palestinian state.

The Palestinian Authority in the West Bank and the Islamic militant group Hamas, which rules Gaza, have also cracked down on dissent in recent years. The PA has detained hundreds of people, including Amro, who was jailed for a week in 2017 over a Facebook post. Hamas violently dispersed protests last March, arresting dozens of people.

In addition to protesting, many Palestinians have also rallied behind the Boycott, Divestment and Sanctions movement, or BDS, a nonviolent campaign that claims to be modeled on the struggle against South African Apartheid.

The campaign has sparked a major backlash by Israeli authorities, who say its true aim is to delegitimize the state and eventually wipe it off the map.

BDS endorses the Palestinian claim of a right of return for the descendants of refugees who fled or were driven out of Israel in the 1948 war that attended its creation. If fully realized, that would spell the end of Israel as a Jewish-majority state. Critics have also seized on statements from prominent BDS supporters to brand it as anti-Semitic, something organizers vehemently deny.

A 2017 law bars entry to foreigners who have called for economic boycotts of Israel or its settlements. Israel invoked the law when it deported Shakir and when it refused entry to US congresswomen Ilhan Omar and Rashida Tlaib earlier this year.