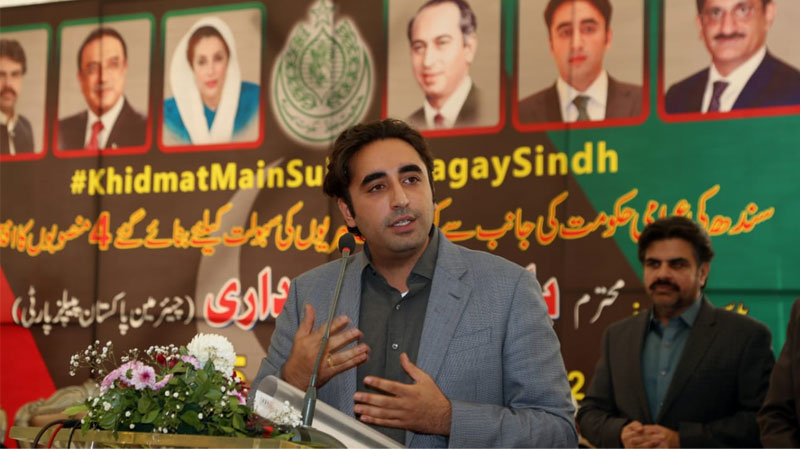 Pakistan People’s Party (PPP) Chairman Bilawal Bhutto Zardari on Monday offered Muttahida Qaumi Movement-Pakistan (MQM-P) ministries in Sindh in exchange for the party breaking off its alliance in the Centre with the ruling Pakistan Tehreek-e-Insaf (PTI).

“Topple it, topple it, topple Imran’s government,” he said at a ceremony in Karachi, where he inaugurated four development projects on Monday. “We will give you equal number of ministries in Sindh. The only condition is that you send Imran home,” the PPP chairman said.

MQM-P is one of PTI’s allies in the federal government and its MNAs Farogh Naseem and Khalid Maqbool Siddiqui hold the federal ministries for law and information technology, respectively. Condemning the government’s gas policy, the PPP chairman said the people of Sindh were suffering due to suspension of gas supply, adding that, “We will have to snatch our share from the government.”

Bilawal said if MQM-P breaks off its alliance with PTI and manages to get Sindh its share in resources, the provincial government will “stand by [MQM-P] for the sake of Karachi’s people”.

“Today or tomorrow, all the facilitators, all the allies [of PTI] will have to take this decision… will have to save Pakistan and end Naya Pakistan,” Bilawal said.

When asked about Bilawal’s comments, Karachi mayor and MQM-P leader Waseem Akhtar said, “Our party might sit and hold a discussion on this, what can be done in future. It’s not about me.”

Bilawal, in his speech, also criticised the PTI government over the decision to remove 800,000 people from the Benazir Income Support Programme, saying that it was “cruel and unjust to snatch Rs 1,000 from poor women in this economic situation”. He vowed to challenge the exclusion of the more than 800,000 people from the programme in a court of law. “The entire nation is embroiled in a plethora of issues. The problems of the masses are escalating every day.”

He regretted that residents of shantytowns “were being made homeless” in extreme winter and urged the mayor of Karachi to halt any anti-encroachment drive that was underway in the city so that people will not be exposed to the cold weather. He told a crowd of supporters that PPP had initiated several development projects in Karachi, which include the construction of two bridges and an underpass which, Bilawal said were “obviously very important for Karachi’s communication network” and will help in improving the city’s traffic woes. He said that Karachi’s development was important for the entire country, not just the city’s residents.

“PPP government is the only government in the country that is working and we can show that,” he said, but acknowledged that his party’s efforts to provide health, education and other facilities to Sindh’s people were not enough to “meet the demand”. He lamented that the federal government was not providing Sindh its rightful share in resources and funds, adding that the PPP cannot “compromise” on the province’s rights.

“At the same time, we will have to think and come up with a way to expand the scope of our development. How can we work more with fewer funds,” he said, adding that public-private partnership was one way to work on mega-development projects.

Meanwhile, the MQM-P reportedly rejected Bilawal’s offer to join the Sindh government by breaking alliance with the PTI-led federal government.

MQM-Pakistan formed an alliance with the federal government for the welfare of people of Karachi not for the seats in federation or provincial government set-up, the party’s spokesperson said in a statement.

He said that the MQM-P would not decide to leave the federal government on the wish of someone, adding that the party believes in the politics of rights of people instead of seats.

The MQM-P spokesperson urged Bilawal to empower local bodies by introducing a bill in the Sindh Assembly.

“Instead of offering us to join Sindh government, PPP should empower local bodies by laying bill in the provincial assembly,” he said, adding that MQM-P would fully support the PPP in this step.

He demanded that Sindh govt should transfer institutions like Karachi Water & Sewerage Board (KW&SB), Karachi Development Authority (KDA), Sindh Building Control Authority (SBCA) and others to the local government.