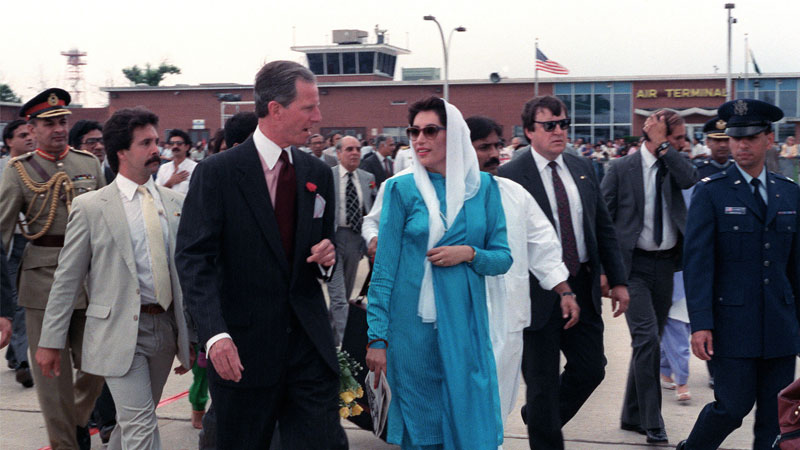 This day , the most unfortunate and deplorable day in the history of Pakistan, when we lost twice elected prime minister and the voice of poor and downtrodden people of Pakistan. Benazir Bhutto’s murder was a great set back not only for Pakistan but for the entire world.

The voice of reconciliation was silenced forever on the fateful evening of December 27, 2007.

The death of Benazir left such a vacuum which will never be filled and the best tribute to pay her is follow and practice her believe in democracy and reconciliation, her firm believe was “Democracy is the best revenge” and “Democracy removes oxygen from the air of the extremists”. She wanted to eliminate the extremism from the roots and while trying to accomplish her desire of a democratic Pakistan free of extremists she herself became a victim of extremism.

She was very young when she made her choice in life and to quote from one of her lectures “In life, an individual makes choices. I made mine on the last day of my father’s life in a prison that our colonial masters built in the city of Rawalpindi. That was the choice to fight for peace and democracy, to fight for human dignity that must come when people can combat hunger, poverty and illiteracy”. Unquote.

“Benazir Bhutto remains one of those charismatic figures like John F. Kennedy, Robert Kennedy, Martin Luther King, Rajiv Gandhi, whose book of life was cut short” wrote Victoria Schofield in the forward of Anna Suvorov’s book “Benazir Bhutto, A multidimensional Portrait”. December 27, is a black day in the history of word, when on this day in 2007, the most courageous woman who was born great was eliminated from the surface of this world, and to live forever in the hearts of millions and in history as a shining star. She was loved and adored by the whole word, which is evident that even the Clintons stayed in the queue in London to get a glimpse of her when she was visiting 10 Downing Street. After taking over the charge of prime minister of Pakistan, the first woman in Islamic world to get this honor, when she visited to attend the Common Wealth heads conference in Kuala Lumpur, in 1989, a huge screen was installed in the conference hall, showing the arrival of all the dignitaries, when BB stepped down from her car all those in the conference hall got up from their seats with loud applause which continued till she took her seat with The “judicial murder” of her father ZAB left a deep scar on her mind and heart, when she being Kept under house arrest, and the belongings of her father were handed over to her after silencing the voice of a man who wanted “to pick up the pieces, very small pieces” and to “built a new Pakistan” The smell of her father’s favorite cologne “Shalimar still fresh on his shirt” always remained in her mind, at that very moment she decided to follow into the footsteps of her father to fight for the rights of poor and downtrodden. In her autobiography she proudly says “I didn’t choose this life, it chose me” and had to fight with those on whom “Greatness was thrust upon”. She was a woman of great vision and strength who had to face tremendous hardships and difficulties throughout her political carrier some times in the form of “operation midnight jackal” sometimes in the shape of IJI sometimes by an extremely charged and hostile opposition so such so that even the chief minister of the largest province would not bother himself to receive her at the airport on her official visit to that province setting aside the official protocol formalities. She smilingly faced all those hardships and conspiracies when virtually she was “Made a prime minister of Islamabad” only. Never was she allowed to complete her constitutional tenure of five years as the prime minister, and her government was dismissed on false charges of corruption, the charges which were never proved in the court of law. She firmly stood up against the terrorisms and madness and wrote a new chapter in the history of ‘Reconciliation” embracing her political enemies. Like Martin Luther King she too had a dream, a dream of peaceful. Prosperous and developed Pakistan, a Pakistan free of poverty and hunger, an educated Pakistan, with peaceful and cordial relations with the neighboring countries. At the side line of 4rth SAARC conference in Islamabad she met than Indian prime minister Rajiv Gandhi , after that historical meeting she was labeled as a “Security rick” by her opponents .In the words of Anna Suvorova ” Given the similar age, origin and education of Benazir and Rajiv Gandhi, direct contacts between them might have led to a rapid restitution of most acute problems between India and Pakistan”, but peace and stability was not acceptable to the enemies of Bhutto family and of Pakistan, Benazir’s government was dissolved under the article 58(2) B. BB was a name of hope, a hope of millions, she was a symbol of peace respected and admired all over the word, she was a great gift from God to this nation but the enemies of the country, enemies of reconciliation and peace never wanted her to succeed in achieving her goals which were not for herself but for the nation. She was in real sense a chain of four provinces, loved and admired by the people of Pakistan, highly educated with special command on the foreign relations, but was killed on this day of December 27, 2007 in Liaquat Bagh, same place where the right hand man of the father of the nation Liaquat Ali Kan was killed in bright day light, one who had same dreams for Pakistan as BB had. Though not in this world, BB will remain in the heart and souls of millions for ever with her message “Democracy is the best revenge” and her fight against terrorism will one day end up in a complete victory, with elimination of all terrorists from the face of earth.

She was a firm believer of her father’s philosophy of life that “Life is too precious a gift to squander in bitterness or recriminations. I look to the future, letting go the past. It’s the future that is in our hands, yours and mine. In my life of triumphs and tragedies I learnt that you don’t have to be strong or powerful to succeed. You just have to have the right ideas.”

She was a staunch believer of love, devotion and fondness, and rejected any kind hate and hostility. She gave a message in clear words that “We need to leave the river of hate and climb upon the bank of confidence to appreciate that our hatred only breeds hatred.” But alas she herself became a hate and sacrificed her life for the cause of love and peace.

It was past mid night December 20, 1971, when Zulfiqar Ali Bhutto came over on national television and radio, after taking oath of office of President of Pakistan, and pledged to the people of Pakistan to “Pick up the pieces very small pieces”. Alas when pledging to his nation and to swearing to himself for a most difficult task of picking up the pieces, he had not the slightest idea that the enemies of Pakistan will never allow him to “Pick up the pieces”, instead his family, the Bhutto family will be torn into pieces. He started to build a new Pakistan and lit the candle of hope in the hearts of millions of Pakistanis but his own family was destroyed, brutally eliminated from the scene of Pakistani politics.

Why we had to see the darkest evening of 27th, December? Probably we the most unfortunate nation on earth will never be told, the truth will never surface; the motives behind this tragedy will never be made public.

The whole world mourned the death of Benazir Bhutto; the world media print and electronic praised her sacrifices of the cause of democracy and for the poor of the country for standing firmly against the doctorial rules. The negative impact on the financial markets globally indicated the implications of her death and her international stature as a global leader.

During her life time she was accused of using Sindh card, where as she never talked of Sindh, is it not unfortunate that even her putting up a white dupata was injected in the minds of Pakistanis as a symbol of “Revenge”. What revenge? very gracefully she accepted the judicial murder of her father an undisputed leader of third , Chairman of Islamic Conference, murder of her two brothers , but always she stood for a strong federation and was willing to reconcile with her worst enemies, she was never given a chance to rule some times by rigging the election some times by no confidence votes and sometimes by dismissing her government on false charges of corruption ,but she never lost hope and that hope she advocated and injected in the hearts of millions of her followers. She was even called by filthy and non-parliamentary

words and names at the floor of the house non but by leader of one of the largest political party of the country, her and that of her mother’s photographs were showered using a plane at Lahore, she was dragged from one jail to another holding hands of her small kids just to meet her jailed husband, sometimes waiting in dazzling heat for hours and hours, but she remained dignified and never lost hope.The daughter of East is no more among us by sacrificing her life she gave a very clear message of hope and courage to millions around the world not to bow head before tyrants and dictators never to be afraid of death, probably she and her father the great Bhutto knew that they had limited time to live, and I quote from the autobiography of Benazir quote “My father had brought me here {Ghari khuda Bushk grave yard} just before I had left Pakistan to go to Harvard University in 1969. You are going away to America he had told me as we stood among the graves of our forebears. You will see many things that amaze you and travel to places you have never heard of. But remember, whatever happens to you, you will ultimately return here. Your place is here. Your roots are here. The dust and mud and heat of Larkana are in your bones .And it’s here that you will be buried” Unquote.

Benazir Bhutto obeyed her great father and got buried where that the greatest leader of the present centuries wanted her daughter. May her soul rest in peace And lets pray that we and our generations to come never see days like 16th of October, 1951, 4rth of April 1979 and 27th of December 2007.

The writer is Ex- Marine Engineer, presently serving in a private organization