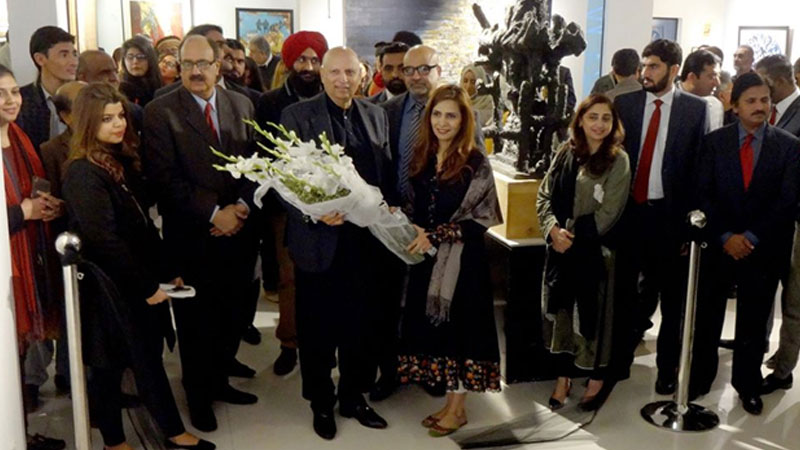 More than 45 artists from all over Pakistan, displayed their artwork at Hamail Art Gallery’s new Orna Furniture House in Lahore. Punjab Governor Chaudhry Muhammad Sarwar inaugurated the exhibition on Monday which was curated by Mahaa Ashraf who is an independent curator, based in Lahore. While there were more 60 artworks on display. The most prominent pieces of art were Beenish Khan’s work which is based on beautiful embroidered Kashmiri shawls, and Maryam Maneka’s mud-podge artwork, which showed the beautiful valley of Kashmir.

Furthermore, Fariha Rasheed informed that the concept behind her work was the beauty of the Kashmir valley depicted through the landscape designs and how the beauty of the valley has deteriorated over the years through war. Ujala Khan talked about her work as well and informed that it draws inspiration from spontaneity and chance, leaving one with a sense of freedom and empowerment that one yearns for.

The purpose of these repetitive rough brush strokes is to convey the anxiety and depression of the modern world in the hope of reigniting the spark of spirituality by showing ideas of survival and faith.

My goal is to create a disparity in the viewer’s mind, with a mix of conflicting feelings and thoughts, creating a dissonance between form and content while highlighting form and language. By explaining emotions and examining duality, different meanings come to mind, which leads to intense personal growth.

Another senior artist from Malaysia Sadaf Farsat said that she paints a variety of subjects using different mediums and techniques and that she does not restrict her creativity to just one single theme. She paint whatever gives her a sense of being connected to her Creator, and whatever gives her the chance of conveying the message of Allah and His Messenger (SAW). Although she gets her inspiration from various concepts and philosophies, her work is mostly inspired by Sufism and how Man’s relation with Allah is described in it. Sufism espouses a well-founded and thorough interpretation of Islam, which focuses on love, tolerance, worship of God, community development, and personal development through self-discipline and responsibility. A Sufi’s way of life is to love and be of service to people, leaving behind one’s ego or false self and all illusions so that one can reach maturity and perfection, and finally reach Allah, the True, the Real. She has also painted a series of “Whirling Derweshes”. As a follower of Rumi, she does her “whirling” on the canvas with her paintbrush. She continues her own “sema” on canvas until a piece is created which gives her satisfaction.

Talking to the media on this occasion, Punjab Governor Chaudhry Sarwar said that Narendra Modi has imposed curfew in Held Kashmir for the last 136 days and genocide of Kashmir is on the rise against which Pakistan, under the leadership of Prime Minister Imran Khan is fighting on every front. We are ready to render every kind of sacrifice for Kashmiris. Today there are protest demonstrations across India due to Narendra Modi’s policies that are fraught with extremism following the RSS ideology. Narendra Modi is usurping the minorities’ rights through biased decisions, and the world community must take note of the situation. 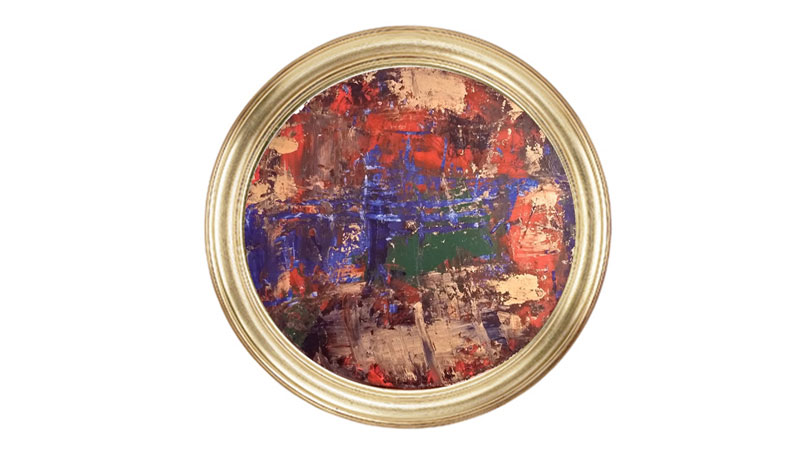 The governor said, “We will never forget the martyrs of the APS debacle and we salute them as well as the Pakistan Army. The entire nation is standing with the families of the martyrs of the nation.” He also reiterated that December 16 is a day of a National Tragedy. Even though the whole country has been affected by the acts of the barbaric terrorists, the people still have faith its army and are ready to lay down their own lives for their motherland as well.

Today, the menace of terrorism has been wiped out from Pakistan and the country is now on the path to development and prosperity. He also encouraged the young artists for their wonderful effort and the support that they showed through their art.

The writer is an independent curator based in Lahore. She can be reached at mahaaashraf27@gmail.com