Brexit or no — exit

The land of Angels has spoken; pushing aside the hand that offered the bouquet of social change, they have accepted a Faustian bargain. The illusion of the indoctrinated masses of following their reason is exactly opposite; in reality, they follow those who put their reason to the profitable ends. Their pernicious love for self- harm, the proverbial Stockholm syndrome outstrips the cunning of the rulers; it is malignant and recurs. The mesmerized people have preferred the Brexit to the human standard of living. 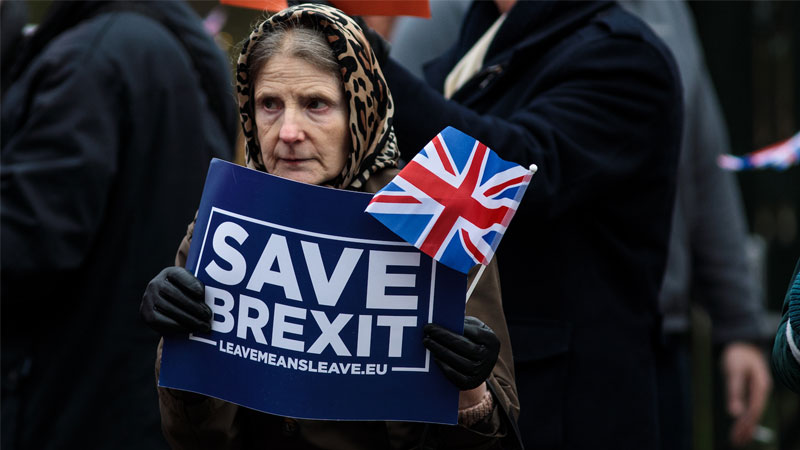 ‘The angel of history’ Walter Benjamin says ‘turned towards the past… he sees one catastrophe, piling wreckage upon wreckage hurling it in front of his feet. The angels would like to stay…but a storm blowing from paradise irresistibly propels him into the future to which his back is turned; the pile of ruins before him grows skyward. What we call progress is that storm.”

Is it progress or decadence, the ‘angels’ will come to know when the next shove will push them into the cage of austerity and rationalization. To avoid the specter of socialism they have released a fascist genie, once the election fever will be over, they will face both the catastrophe and the wreckage with or without the angel.

‘The more sand has escaped from the hourglass of our life’ Sartre prophetically says, ‘the clearer we could see through it’.” Poor people are very fond of their annihilation from a lofty standard’, concludes Brecht. What else can they do? A condition of slavery stretching from feudal era to the present has left deep scars on their psyche, they have fallen in love with their chains and have adopted the jargon of their jailors; they demand the lighter fetters, with more movability so they can produce the surplus unhindered.

Democracy, Lincoln says is the government of the people, by the people and for the people; but who the people are, an abstraction like democracy or real thinking human beings, who know good from bad, exploitation from pacification and life from death. Marx knew the fact; his proletariat is neither people nor a crowd fighting to preserve the self -interest. Proletariat is a class of conscious workers who emancipate themselves to start a struggle against those who usurp the surplus produced by them.

‘Whatever the point the revolutionary theoretician of revolutionary discourse arrive’ Gyorgy Lukacs says ‘at using intellectual powers and spiritual labour, the proletarian will already be there thanks to the fact that he is a member of the proletariat—assuming, that he remembers his true class membership and all the consequences arising there from.’ Lacking in class-consciousness, ‘he is merely a puppet hanging over a string’.

By overcoming the capitalistic logic of freedom of subjectivity, the worker knows his objective position in the process of production. Election of master cannot change master-slave relations; it confirms the former’s control. Had there been a little possibility of a change capitalism would have removed the electoral red herring long ago? The participation of the left in elections provides it with an opportunity to organize itself, but seeking power through the electoral process is neither possible nor a workable proposition.

The structure of the capitalist mode of production is totalitarian. Without its complete replacement with the new order, based on pacification of life and socialization of means of production, hoping to bring a change in the present structure to improve the condition of the masses is a pipe dream because its structure denies any such possibility. From the poultry yard of bourgeois Parliamentarianism, Rosa warns, the most formidable social transformation of history from capitalism to socialism is impossible.

Democracy, Lincoln says is the government of the people, by the people and for the people; but who the people are, an abstraction like democracy or real thinking human beings, who know good from bad, exploitation from pacification and life from death

The invisible bureaucracy, developing as cast, the capitalist media that uses every means to dehumanize the thought, and the capitalist guardians and guards that glorify the inhuman system as natural and eternal, have to be eliminated in a single stroke. There is no room for a gradual change; those afflicted by the hope are the ones who frustrate themselves in contesting and losing elections.

The much-touted democracy is not a gift of capitalism to the masses for its kind heart or noble spirit; it is the outcome of large-scale production, exchange and the concentration of population in urban areas; it gives the moneyed class an opportunity to rule people with their consent. When the consent is unnecessary or becomes a threat to the system, it is repealed, suspended or abrogated completely; Nazism was the case in point.

The irony is that no one has flouted and disgraced democracy more than those committing violence in its name. Roman tied the vanquished to their chariots but the modern democrats liquidate the whole population to plunder the resources of weaker nations. What happened in Indonesia, Chile, Brazil and lately in Bolivia where democratically elected governments were overthrown or their leaders were removed from power because of their people friendly benign stances causing no threat to the property structure are enough examples to reveal the myth surrounding democracy.

‘We need history’ Nietzsche says,’ but not the way a spoiled loafer in the garden of knowledge needs it’. History warns and heralds, it is time for the left to learn its lessons not as loafers but as Marxists. The emancipation of the proletariat, the only revolutionary class is the job of the proletariat, they need to mobilize themselves and have to turn their struggle into an organized form. The party formed by the revolutionary class would alone be an authentic party. The left must give up the old dream of leading the revolutionary class as its vanguard. If the Kronstadt uprising in 1921 could not bring the point home, the almost redundant roles of the communist parties are proving it now.

The Russian revolution was a tremendous experiment. It proved the authenticity of socialism beyond doubt; it is time to transcend the experience. Beside the old challenges, the technological influences working to curb the critical thought are the staggering ones. For their position in the productive process, workers are supposed to be aware of these influences but with massive unemployment, scarcity and the fascistic tendencies in the system, they have turned the external authority into self-control.

Another existential challenge haunting the left is its failure to combine the class- organization with class activity. The social democracy as vanguard has done nothing save striving to achieve immediate results through social reforms. It has sapped ‘the spirit of hatred and sacrifice from the working class’ Walter Benjamin adds,’ for they are nourished by the image of enslaved ancestors rather than that of liberated grandchildren’.

The spirit of class- identification and class solidarity that joined the workers globally making them an impregnable force has lost under the wreckage of Soviet Union. To regain the spirit requires serious reflection and unwavering resolve. Loss of election or a temporary victory of a social democratic party will not solve any long-term problems. Angel of history will continue to stand turned to the past, and the single catastrophe will keep recurring and piling wreckage, hurling it in front of his feet. The stasis has to overcome through conscious organization else ‘even the dead will not be safe from the enemy if he wins’the last battle ‘and this enemy has not ceased to be victorious’. (Benjamin).

The writer is an Australian-Pakistani based in Sydney. He has authored several books on Marxism (Gramscian and Frankfurt Schools) and History