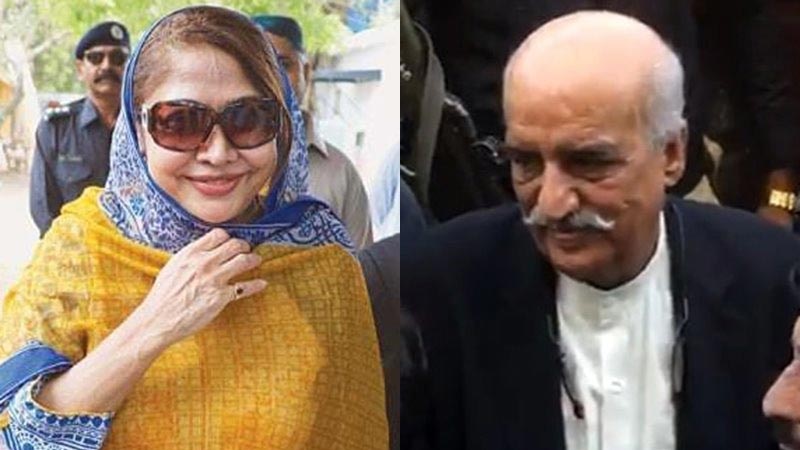 PPP leader Faryal Talpur was granted bail by the Islamabad High Court (IHC) on Tuesday, in a case pertaining to money laundering through fake accounts which is being probed by the National Accountability Bureau (NAB).

She was granted bail against surety bonds worth Rs 10 million.

In response to the court’s inquiry regarding Talpur’s involvement in the case, the NAB’s counsel insisted that money, allegedly transferred to Zardari Group’s bank account from a fake bank account, was withdrawn later by a cheque signed by Talpur.

NAB had taken the PPP leader into custody earlier this year to interrogate her in the case. She was kept in Adiala jail.

Talpur had filed a bail application earlier this month, maintaining that she is the mother of a differently-abled child. In order to care for her child, she asked the court to grant bail until the completion of the trail. Her appeal was meant to be heard last week but was adjourned until today as NAB had not submitted a response.

Zardari, Talpur, and others accused face charges of corruption through fake bank accounts and embezzlement in the financial facility for Park Lane Private Limited and Parthenon (Pvt) Limited. NAB alleged that the national exchequer suffered a loss of Rs 3.77 billion because of the irregularities.

Meanwhile, PPP stalwart Khursheed Shah was also released on bail by an accountability court in Sukkur. The court ordered him to pay Rs 5m in surety bonds for his release.

Shah was brought to the court via ambulance from the National Institute of Cardiovascular Diseases (NICVD) after a five-day judicial remand granted to NAB expired.

NAB’s prosecutor requested the court to grant a further remand of 15 days, but Shah’s counsel and Senator Raza Rabbani argued that a 90-day period since his arrest had already lapsed without the anti-corruption body filing a reference or presenting any evidence to the court.

The prosecution, in response, said that a reference against 18 people, including had been prepared and had been submitted to NAB chairman retired justice Javed Iqbal, which contains evidence implicating him in Rs 1.24 billion worth of corruption.

The court granted Shah bail, and told him to appear before it when the NAB submits the reference against him.

The PPP leader was arrested by NAB’s Sukkur and Rawalpindi teams in September this year and was later shifted to Sukkur.

Multiple corruption cases against him are under investigation with NAB. In 2012, an accountability court had directed NAB to file a reference against him on a complaint pertaining to alleged accumulation of illegitimate assets.

In 2013, NAB had reopened two corruption cases against Shah under the directives of the Lahore High Court.

In July this year, the NAB chairman had approved nine inquiries against different personalities, including Shah.

Major progress was made in the corruption reference against Shahid Khaqan Abbasi and other accused persons as Sheikh Rasheed became a witness in the LNG contract case. He will record his statement in an accountability court during its next hearing.

The National Accountability Bureau (NAB) will produce an overall 59 witnesses in the court where the petitioner Sheikh Rasheed will be the first witness in the case.

Meanwhile, Leader of Opposition in Punjab Assembly Hamza Shahbaz filed a petition for his release on bail in the Lahore High Court in Ramzan Sugar Mills reference.

The petition said that the NAB has initiated Ramzan Sugar Mills inquiry with malicious intentions. They initiated the inquiry score of times but failed to find any irregularity, he said.

The nullah was built in tehsil Bhawana in the public interest, the petition said. The provincial cabinet and the assembly had granted approval to the construction of the sewerage drain.

The bureau found no evidence against Hamza, while co-accused in case Shehbaz Sharif has already granted bail by the court, according to the petition.

The arrest warrants of Hamza were issued after charges framed against him in Ramzan Sugar Mills reference, which was unlawful, the petition argued.

Also, Sindh Assembly Speaker Agha Siraj Durrani and co-accused on Tuesday appeared before an accountability court pertaining to the assets beyond known sources of income case.

As the hearing started, the Investigation Officer (IO) of the case presented his report in the court.

According to the report, the procedure to declare absconding accused in the case as proclaimed offenders has begun and their names have been advertised in various newspapers.

The court adjourned the hearing of the case till January 15. Speaking to the media persons outside the court, Durrani said, the country’s political situation changes every hour. Replying to a question, Durrani said: “He is not sure about the federal government, but the Sindh government will definitely complete its tenure.”