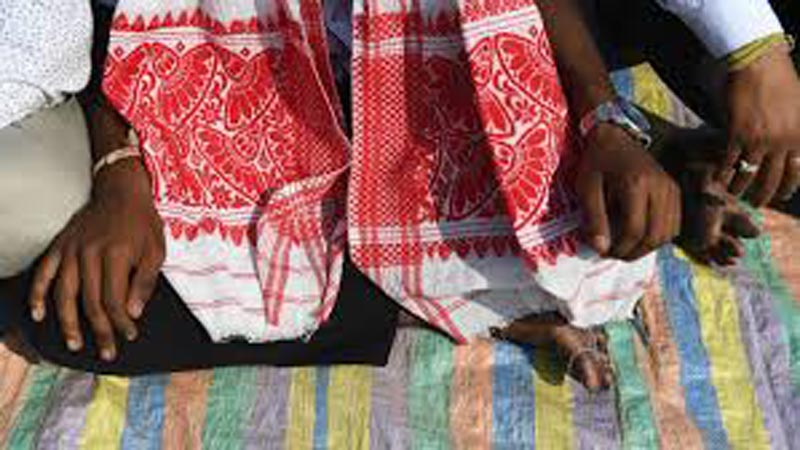 At the epicentre of deadly protests in Assam, a red and white cloth has come to symbolise the struggle of the Indian state’s indigenous “sons of the soil” against a new citizenship law that they see as a dangerous threat to their unique culture. Traditionally worn by fishermen and peasants, millennials and others in the far-flung region have co-opted the gamosa, tieing it around their heads, their waists and emblazoning it with anti-government slogans.

“This is like a flag for us,” said Jatin Borah, 22, one of thousands taking to the streets in days of riots and running battles with police firing blanks and live ammunition that have left five people dead. “It represents Assam, its culture and collective political and social aspirations of its people,” the student told AFP. “It’s our pride. It is uniting us.”

India’s northeast region sandwiched between Bangladesh, China and Myanmar has long seethed with inter-ethnic tensions, with armed tribal groups still resisting being part of India. Assam in particular has long seen hostility between locals and Bengali-speaking immigrants brought by the British to toil on tea plantations or who flowed in around Bangladesh’s 1971 war of independence. Years of agitation driven by student organisations that included the 1983 Nellie Massacre — when at least 2,000 people were butchered in six hours — only ended in 1985 with the Assam Accord. Part of the agreement was to root out foreigners and this year a contentious citizens’ registry left off 1.9 million people unable to prove that they or their forebears were in Assam before 1971. They face possible statelessness, incarceration in prison camps or even deportation.

Now Prime Minister Narendra Modi has re-opened old wounds with legislation passed last week that could give citizenship to 20 million immigrants living in India — including some 500,000 in Assam.

Graffiti has sprung up across Guwahati, Assam’s main city and the epicentre of days of riots and clashes with police that left two people dead and dozens hurt, saying it violates the hard-won 1985 deal. “The law poses a direct threat to our culture, livelihood and homeland,” Samujjal Battacharya, a senior figure in the still-powerful All Assam Students Union (AASU) organisation. “We won’t accept even a single immigrant. Assam has taken enough immigrants in the past,” he said as protestors chanted “Long Live Assam” and “Hail, Mother Assam”.

Back to the roots

He too sports a gamosa, as do two young women walking silently by, theirs emblazoned with “Mr Modi, Assam is not your dumping ground” in English and Assamese, the local official language.

It comes in different sizes but the pattern of a red border of flowers around the white handmade cotton is universal, cutting across more than 20 tribes of Assam’s valleys and hills. “The gamosa has been part of the life for centuries in Assam,” Bishnu Saikia, a social scientist, told AFP, used by farmers and fishermen “primarily to wipe sweat at work.”