* Pays tribute to martyrs of APS on 5th anniversary of massacre 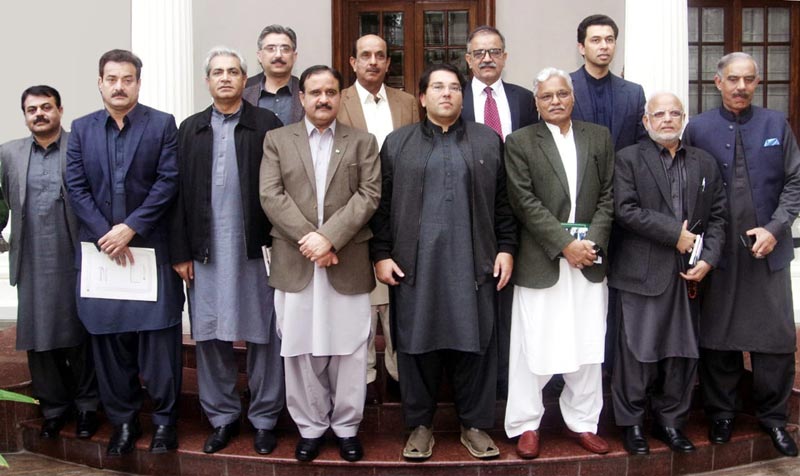 Presidents of three regions of PTI and General Secretaries under the leadership of Chief Organiser Saifullah Niazi called on Chief Minister Punjab Sardar Usman Buzdar at CM Office on Sunday in which matters pertaining to improving party affairs and coordination were put under discussion, and proposals to make PTI more vibrant and effective at grassroots level also came under review.

It was also decided during the meeting that in order to improve governance, the process of mutual consultations will have to continue on permanent basis. Usman Buzdar while talking on this occasion said that workers are valuable and worthy asset of PTI and their capabilities will be fully benefited. Office-bearers and workers of PTI are our pride. Due works and grievances of PTI office-bearers and workers will be redressed on priority basis.

I have no other agenda except serving the people of the province, he stated. Every work is done on merit in Punjab and in spite of doing criticism for the sake of criticism, the performance of Punjab is far better than all other provinces, he emphasised. Such elements will continue to criticise and Punjab will keep on advancing forward. We are serving the people with good intentions with dedication during our fifteen months. Record legislation has been done in Punjab Assembly in a short span of time. Previous governments piled up huge problems after coming into power during past thirty years and time for displaying pomp and show has gone. Now only work is performed with true intentions, he maintained.

Necessary steps are being taken for holding local bodies elections and we intend to hold these elections during initial months of coming year for which expeditious steps are being taken. According to the vision of Prime Minister Imran Khan we want to make Punjab with regard to good governance a model province, he stressed. Chief Organiser of PTI Saifullah Niazi while talking on this occasion said that we will work jointly in order to further strengthen PTI and the process of streamlining the party at grassroots level is further being expanded and good results will surface after taking decisions jointly with mutual consultations. Those who called on Chief Minister included Central Senior Vice President Arshad Dad, Central Vice President Umar Sarfaraz Cheema, Central Deputy Secretary General Umar Mir, Central Joint Secretary Musaddiq Ghuman, Secretary Good Governance Punjab Ijaz Minhas, President Central Punjab Ijaz Chaudary, President Northern Punjab Sadaqat Abbasi, President Southern Punjab Noor Bhabha, General Secretary Central Punjab Ali Imtiaz Warriach, General Secretary Northern Punjab Dr. Hassan Masood and General Secretary Southern Punjab Ali Raza Dreshak. Chief Whip and Member Punjab Assembly Syed Abbas Ali Shah was also present on the occasion. Meanwhile, Chief Minister Punjab Sardar Usman Buzdar in his message on the occasion of fifth anniversary martyrs of Army Public School Peshawar has said that students and teachers of APS laid down their precious lives for the sake of attaining great objective. Those brutes who committed barbarity five years ago with innocent children have met their logical end. The great sacrifices given by students and teachers will bear fruits who embraced martyrdom during APS tragic incident. Exemplary unity of the whole nation has come to surface owing to great sacrifices being laid down by the martyrs in the war against terrorism. The great sacrifices of martyrs have induced a new spirit and courage in the hearts and minds of the nation. In order to achieve great objective of maintaining peace, the blood of innocent children has attained fruition and our dear homeland has been blessed with peace owing to unprecedented brave sacrifices being laid down by the audacious children and teachers of the nation. He further said that the children of APS have written a history by shedding their blood in order to make Pakistan secure and peaceful. The day of 16th December will always refresh the memories of great sacrifices being rendered by the martyrs of APS and the nation will never forget everlasting and unforgettable sacrifices of the children and teachers of APS. The whole nation got united in the war against terrorism owing to blood being given by innocent children. Martyred children and teachers are heroes of the whole nation. Usman Buzdar further said that there is no room for terrorism and extremism in Quaid’s Pakistan. The whole nation is paying rich tributes to the great and unforgettable sacrifices being rendered by the martyrs of APS.

Separately, Buzdar by taking notice of firing incident at the house of retired army man in the premises of Kakrali Police Station Gujrat and also sought a report from RPO Gujranwala. He further directed to take stern legal action against the accused persons. He further directed that the accused should be brought in the firm grip of law as soon as possible and provision of justice to the affected family should also be ensured. A case has been registered against the accused for doing firing on the notice taken by Chief Minister Punjab. Police officials visited the house of the affected person and assured him complete justice.