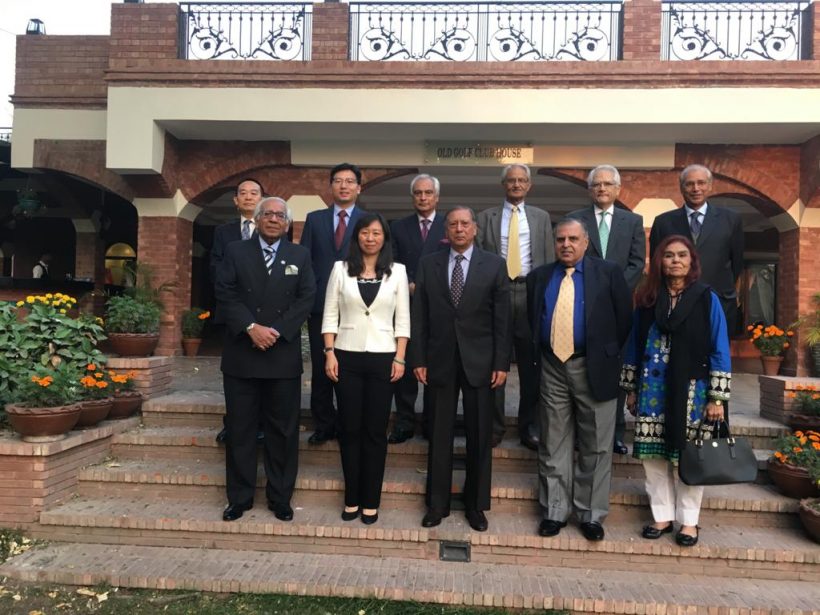 The Lahore Council for World Affairs (LCWA) and visiting scholars of the China Foreign Affairs University (CFAU) had an in-depth exchange of views on bilateral, regional and global issues during the latter’s visit to Lahore at LCWA’s invitation from 8-12 December,2019. The CFAU scholars included Professor Shi Yi, Dean Department of International Studies, Professor Gao Shangtao and Professor Ren Yuanzhe whereas the LCWA delegation included senior retired Ambassadors of Pakistan. Besides talks with LCWA, the programme of the visiting CFAU delegation also included meetings with other think tanks in Lahore.

The talks between LCWA and CFAU delegations focussed on Pakistan-China relations; strategic and economic importance of CPEC; challenges posed by growing Indo-US strategic cooperation and implications of the rise of Hindutva in India for Kashmir, Pakistan and the region; tension in the Persian Gulf region; prospects of peace in Afghanistan; and river water issues between India and Pakistan.

It was agreed during the discussions that Pakistan-China friendship served the best interests of the two countries besides strengthening regional and stability. It was a matter of satisfaction that the governments and peoples of Pakistan and China were fully committed to strengthening the cooperation and strategic partnership between the two countries. CPEC, which envisaged Chinese investment amounting to $62 billion in various sectors in Pakistan, had the potential to take Pakistan-China friendship, which had stood the test of time, to new heights. The Chinese side pointed out that CPEC related projects had already generated more than 70,000 thousand new jobs for Pakistan nationals besides accelerating Pakistan’s GDP growth rate. Both sides emphasised the importance of expeditious implementation of CPEC projects.

The two delegations also exchanged views on the emerging challenges in South Asia and options for the resolution of root causes of tensions in the region, especially the Kashmir dispute. The Chinese scholars were briefed on river water disputes between Pakistan and India and their serious implications for Pakistan. The Chinese side emphasized the importance of peace and stability in the region as a pre-requisite for economic development.

At the conclusion of the talks, both Ambassador Javid Husain, President, LCWA and Professor Shi Yi expressed the hope for the continuation of talks between the two organisations through regular exchange of visits.