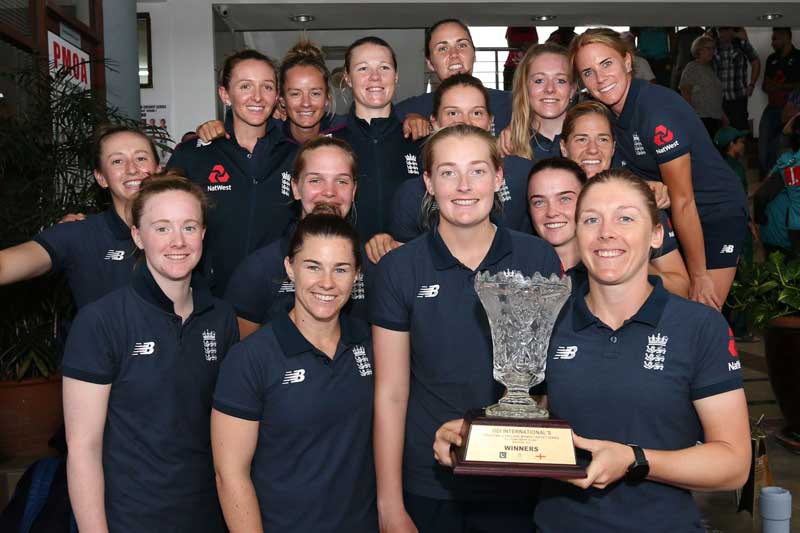 ISLAMABAD: Pakistan and England shared a point each as rain washed-out the third and final ICC Women’s Championship ODI between them at Kinrara Oval, Kuala Lumpur on Saturday. The addition of one point took Pakistan’s tally to 16 and saw them leapfrog South Africa Women to the fourth spot on the points table, while England, with 29 points, strengthened their hold on the second position. The conclusion of the ODI series – which England won 2-0 – also culminated both teams’ ICC Women’s Championship journey. The top-four teams on the standings, along with hosts New Zealand Women, will secure direct qualification for the ICC Women’s Cricket World Cup 2021.

England captain Heather Knight won the toss for the third time in the series and elected to bowl. Though the match began on the scheduled time, the toss was delayed by 15 minutes due to drizzle. England made one change in their line-up with pacer Freya Davis, who replaced Kate Cross, making her ODI debut. Pakistan, making three changes, also handed an ODI debut as batter Kaynat Hafeez replaced Sidra Amin. The other two changes saw Anam Amin and Aroob Shah come in at the places of Nashra Sandhu and Rameen Shamim.

Pakistan were provided a solid foundation by openers Nahida Khan and Javeria Khan as the pair put together the record for the highest first-wicket partnership for Pakistan Women. Their 96-run partnership surpassed Maliha Hussain and Sharmeen Khan’s and Ayesha Zafar and Nahida Khan’s 84-run stands against South Africa (1997) and New Zealand (2016) respectively.

Over the course of the partnership, Nahida scored her ODI career’s eighth half-century. The right-handed batter scored 55 runs from 59 balls, eight of which were dispatched for fours. With 37 off 65, Javeria was the second best scorer. She hit five fours before she became the first Pakistan wicket to fall when Sarah Glenn trapped her LBW on the first ball of the 20th over. The dismissal sparked a collapse — thanks to Glenn, who took four wickets for 18 runs in eight overs — as Pakistan lost eight wickets for 49 runs. The hosts were 145 for eight in 37.5 overs when rain forced umpires to stop the play. Anya Shurbsole was the other notable bowler as the pacer returned three for 32 in 6.4 overs. Knight, the England captain, was awarded player of the series award for scoring 127 runs in the series at an average of 63.50 and taking two wickets. The ODI series will be followed by three T20Is, which will be played at Kinrara Oval on December 17, 19 and 20.