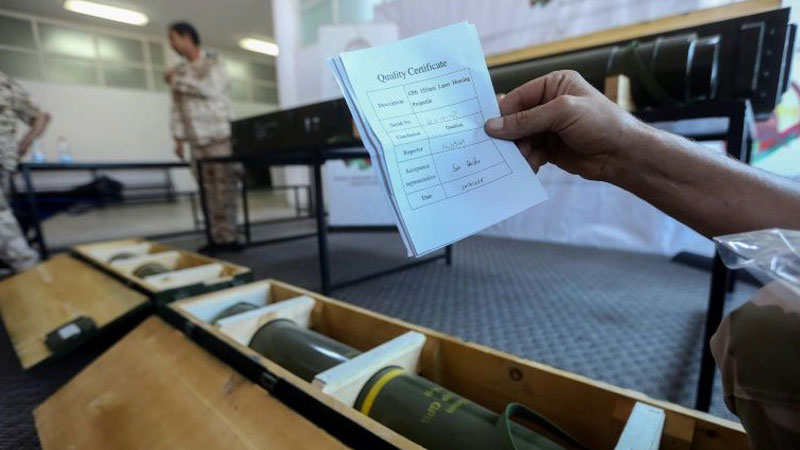 From buying an Irish navy boat re-registered as a “pleasure yacht” to enlisting a Canadian firm to recruit Sudanese fighters — Libya’s warring parties are running rings around a UN arms embargo.

That’s the upshot of a near-400-word report published this week by UN experts, who accuse an array of firms and external powers of violating a 2011 embargo by delivering arms or fighters to the North African country.

Mired in chaos since the NATO-backed uprising that toppled and killed dictator Moamer Kadhafi eight years ago, Libya’s military malaise has deepened further this year.

Eastern strongman Khalifa Haftar in April launched an offensive against the Tripoli-based Government of National Accord (GNA) — a military campaign the UN panel of experts says has “unleashed new transfers of military equipment” to Libya.

Such transfers have been “repeated and sometimes blatant, with scant regard paid to compliance with the sanctions measures”, the report says, noting that some deliveries were long planned and painstakingly disguised.

The UN experts conclude “the arms embargo was ineffective, and resulted in regular maritime and air transfers to Libya of military material”.

For example, they detail the opaque process surrounding the transfer of an Irish navy patrol boat to Haftar’s forces.

The ship was subsequently bought by Haftar’s forces for $1.5 million.

The vessel was supposed to be delivered to Alexandria, the report says, but instead arrived in the eastern Libyan coastal city of Benghazi without ever docking at the Egyptian port, the UN investigators found.

Once in Benghazi — held by Haftar’s forces — it was refitted with weaponry akin to when it was an Irish navy vessel, including a 40-millimetre-calibre cannon and two 20-millimetre cannons, says the report.

In an interview last month with AFP, Ghassan Salame, the head of the UN mission in Libya, decried the escalatory activity of “external parties”.

The UN report highlights Jordan, the United Arab Emirates and Turkey as regular embargo violators, with Amman and Abu Dhabi allegedly funnelling arms to Haftar, while Ankara equips the GNA.

More and more sophisticated arms including drones, armoured vehicles and anti-tank missiles have been delivered to the two camps in recent months.

The report accuses the UAE of delivering a Russian aerial defence system (Pantsir-S1) to Haftar’s forces.

The report says foreign combatants have been recruited by both sides, including from Sudan and Chad, but makes no mention of Russian mercenaries who — according to media reports denied by Moscow — have fought alongside Haftar’s forces.

It names recruiters and middlemen, including one who allegedly played both sides, transferring fighters to both Haftar’s forces and GNA loyalists.

The biggest contingent, some 1,000 fighters, came from Sudan’s Rapid Support Forces (RSF) militia in support of Haftar, the experts say.

They were deployed in Libya on July 25 this year by RSF leader Mohamed Hamdan Daglo, a key player in Sudan’s political transition in following the ouster earlier this year of veteran dictator Omar al-Bashir.

The UN experts say that the Sudanese fighters were sent to Libya under a contract signed in Khartoum on May 7 between Canadian firm Dickens & Madson and Daglo, in the name of Sudan’s military council.

The contract, annexed to the UN report, saw the company pledge to Daglo that it would “strive to obtain funding for your council” from Haftar’s administration in exchange for the military assistance.

Contacted by AFP, the RSF denied sending any soldiers to Libya.

The experts said they were still examining the role played by the Canadian company in the alleged deployment of Sudanese soldiers.

They deplored the persistent and growing involvement of international and regional actors, both state and non-state, as a military stalemate continues on the ground on the outskirts of Tripoli.

This week, Ankara even promised to send troops to Libya to support the GNA, if required, further exacerbating tensions.

In a bid to revive the political process, Salame has set up an international conference in Berlin for early 2020 with the stated goal of putting to an end to international divisions on Libya.