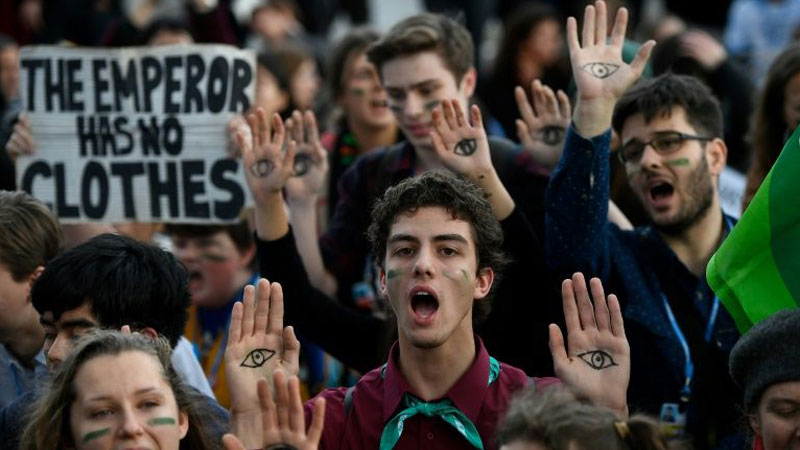 United Nations climate negotiations were deadlocked deep into overtime and through the night, with even the best-case outcome likely to fall well short of what science says is needed to avert a future ravaged by global warming. The COP25 summit in Madrid arrives on the heels of climate-related disasters across the planet, including unprecedented cyclones, deadly droughts and record-setting heatwaves.

It began on December 2 and the talks were supposed to end on Friday evening, but — as is often the case at such summits — they were still under way early Saturday, with new statements expected to be released in the coming hours.

Scientists have amassed a mountain of evidence pointing to even more dire impacts on the near horizon, while millions of youth activists are holding weekly strikes demanding government action.

Sixteen-year-old activist Greta Thunberg led student marchers in Turin, Italy Friday, and chastised world leaders for acting “as if there is no tomorrow”.

Briefing journalists as talks sailed past their provisional deadline, host Chile’s coordinator Andres Landerretche admitted “the eyes of the people are on us”.

“We must show the world that we are capable of delivering the agreements that are needed to tackle the unprecedented challenge before us,” he said.

As pressure inside and outside the talks mounted however, old splits between rich polluters and developing nations re-emerged over who should slash greenhouse gas emissions by how much, and how to pay the trillions needed to live in a climate-addled world.

Newer fissures, meanwhile, between poor, climate-vulnerable nations and emerging giants such as China and India — the world’s No.1 and No.4 emitters — also blocked progress.

The narrow aim of the Madrid negotiations is to finalise the rulebook for the 2015 Paris climate accord, which enjoins nations to limit global temperature rises to “well below” two degrees Celsius.

Earth has already warmed 1C, and is on track to heat up another two or three degrees by 2100.

But “raising ambition” on emissions remains the overarching goal in Madrid and especially next year, when Glasgow will host the last climate summit before the Paris treaty becomes operational.

The draft Madrid agreement under negotiation, which must be approved by consensus, lays out two options.

The first — favoured by nations reluctant to enhance their targets in the short term, including the US, India, China and Saudi Arabia — simply repeats language in the 2015 treaty.

But a group of more than 80 poor and climate-vulnerable nations backed by the European Union are insisting on a stronger commitment from all.

“(We) will not walk away without a clear call for all countries to enhance their ambitions,” said Marshall Islands climate envoy Tina Stege.

“On ambition, this will be the key fight tonight, and probably well into tomorrow,” said Alden Meyer, policy and strategy director at the Union of Concerned Scientists.

‘Red line for US’

Another potential deal-breaker is so-called “loss and damage” — how countries already counting the cost of the climate emergency can be compensated.

The United States, which is leaving the Paris agreement, has aggressively blocked any provisions that might leave them and other developed countries on the hook for damages that could total more than $150 billion per year by 2025, observers and diplomats have said.

“This is a red line issue for Washington,” said Meyer.

“There can be no acknowledgement of the need for additional finance because that would push the button of a certain man in the Oval Office.”

Some countries historically aligned with the emerging giants China, India and Brazil over the course of the 25-year talks broke rank this week.

In a statement, the Association of Small Island States coalition accused Australia, the United States, Canada, Russia, India, China, and Brazil of “a lack of ambition that also undermines ours”.

The talks received a shot in the arm Friday after the EU pledged to make the bloc carbon-neutral by 2050 despite the refusal of Poland — a major emitter — to sign on.

But the EU Commission stopped short of setting a crucial intermediate target of reducing emissions by 55 percent or more by 2030.