The 88th birth anniversary of renowned poet, biographer and scholar Jaun Elia is being observed today.  Elia was born on December 14, 1931 and died on November 8, 2002. 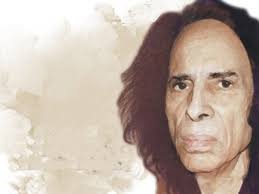 He was born in Amroha, Uttar Pradesh in 1931 and later migrated to Pakistan in 1957 and settled in Karachi. Jaun Elia’s unique writing style fascinates the readers and he will always be remembered for his greatest services to the Urdu language.

The second collection of his poetry Ya’ani was published posthumously in 2003. Afterwards Jaun’s trustworthy companion Khalid Ansari has compiled and published his three consecutive collections, “Gumaan” (an Urdu word which means “Illusion”) in 2004, “Lekin” 2006 and “Goya” 2008.

His famous poetry collections include Shayed, Ya’ni, Gumaan, Lekan, Ramooz and Goya. He was fluent in Arabic, English, Persian, Sanskrit and Hebrew.

Jaun Alia was also awarded Presidential Pride of Performance for his literary services.